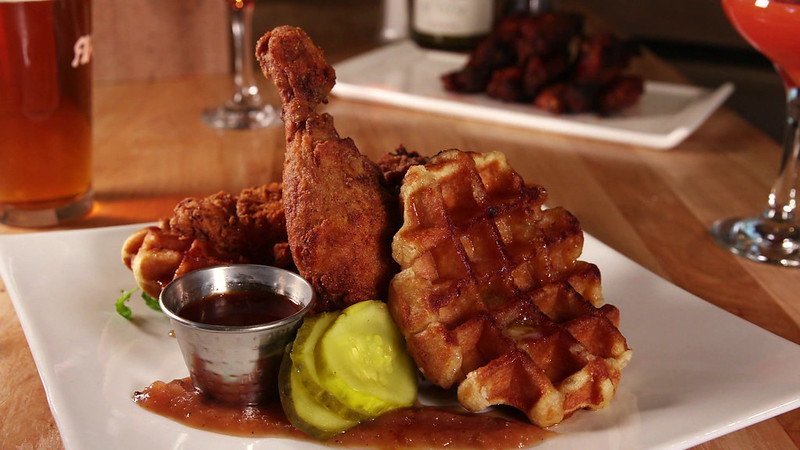 “It kind of catches people’s eyes when it goes to the dining room.”

Or a messy burger stuffed with pulled pork.

“I would suggest a roll of paper towels.”

And I’m sure you’ve never had poutine like this.

Which is why you should save room for The Tack Room.

Located near the train station in Lincoln, Massachusetts, The Tack Room is a warm, welcoming spot which gets its name from the surrounding horsing community according to owner, Michael Culpo.

06’09’49 “So being in Lincoln, there’s a lot of local farms and The Tack Room  is an equestrian term. So it’s where they put all the horse equipment, whether it’s a saddle, horseshoes. So a lot of the wood tones kind of go hand in hand with what a Tack Room is.

“We really tried to create a feel that is comfortable for people whether it’s someone coming off the commuter rail to families to anniversary dinners. We try to make it as relaxing as possible for people to come in after a stressful day of work.”

And when you come in, you’d better be as hungry as a horse because Executive Chef Dan Lane is making a menu lined with creative comfort food you’ll want to try.

“We just want to make that upscale comfort food that you know, you can get down south and make it our own twist into our New England style. It’s just something that’s gonna make you feel good inside and put a smile on your face.”

And Phantom was smiling ear to ear as he tasted it all in search of THE PERFECT MEAL.

Appetizers at The Tack Room are some of the most creative around.  With unique options like Shrimp and Alligator Chorizo presented in a skillet with cajun shrimp. Wings served in sauce or dry rub.  And this mash-up of Thanksgiving and poutine.

But it’s the Cornbread Cupcake that truly takes the cake when it comes to appetizers.

This savory take on dessert features a cornbread cupcake topped with mashed potato frosting, popcorn chicken and a pipette of good ol’ gravy for one tasty treat.

“It’s comfort that’s gonna hit the soul and just kind of make you happy inside. It’s that fresh corn, mashed potatoes like mom used to make and and that delicious gravy that you know just soaks everything up.  I mean you just kind of puts a smile on your face. That just sets the mood for the rest of your day.”

You’re going to want to get your hands on some of the Tack Rooms sandwiches.

Like the South Carolina Fried Chicken with jalapeno slaw, cheddar cheese and Carolina bbq sauce on brioche or the so called ‘Beast Burger’.

“It’s a double patty burger that we stuffed with pulled pork, cheddar cheese, with a fried onion ring on top. You know, it’s one of those burgers. It’s like, how am I supposed to eat this? But that’s what they say if it’s not messy, it’s not good, right?”

But it’s the Famous Duck Grilled Cheese that is a sandwich like none other.

Loaded up with confit duck, Vermont cheddar, apple butter, and caramelized onions on cranberry bread, this sandwich is so special, it has a cult-like following.

“Once people have it, they come up to the line and they compliment us. People are obsessed with it.  I’ve had people just drive from all over to get it. Something happens when you eat that I can’t explain it, but something happens.”

When it comes to entrees, The Tack Room has something for everyone. From the ‘Get in My Belly’-a flavor bomb of a dish loaded up with shrimp, candied pork belly, sauteed vegetables and rice noodles in a pineapple habanero sauce. A grilled sirloin served with duck confit potatoes and cremini mushrooms topped with balsamic glaze

And the decadent Tack Mack and cheese spiked with pork belly.

“You’re gonna get a good cheese pull off the mac and cheese. And then you’re gonna have the flavors from the candy pork belly. It hits on all cylinders. “

But it’s the Chicken and Waffles that’s a true showstopper- served with a bourbon maple syrup.

“We do a true Belgian pearl sugar waffle.   This thing is soft, crunchy. It’s got like the big pearl sugars to it, that gives it that kind of crunch. We confit the chicken leg and then we fry it. So you get that nice juicy inside fall apart meat off the bone moist, juicy. And then the skin just gets that nice crispy buttermilk fried like down home fried chicken. It’s amazing”

At dessert, you can opt for the Tack Room’s Creme Brulee which changes seasonally. Or Kyleigh’s S’mores Dip- named for its creator and Chef Dan’s daughter, Kyleigh.

“It’s in like in a skillet so it looks like a nice, like campfire s’mores dip with a nice graham cracker cookie.  It’s a perfect way to end your meal. Proud dad moment right there”

And Kyleigh’s Smores Dip make for THE PERFECT MEAL at The Tack Room.