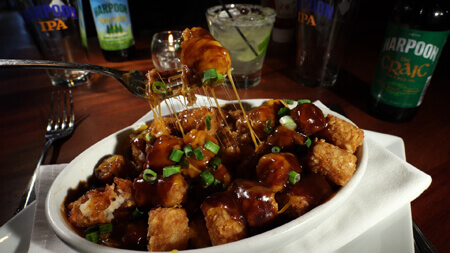 A salad served in an edible bowl.

“Personally, I think the cheese bowl’s better than the salad itself.”

Everything you love about breakfast piled on a burger.

And a Short Rib Casserole topped with tots and cheese.

“It’s definitely not your typical meat and potato dish.”

At The Gavel Public House in Wrentham, they’re serving pub fare with flair.

Located in Wrentham Center, this Irish style pub is cozy with low lighting, lots of natural woods and a spirited vibe.   TJ Gianfrancesco  is a restaurant jack of all trades, functioning as both the Executive Chef and General Manager of the Gavel.

“I spent my life in the kitchen and then to kind of get out in front of the house and see how it works out here. But my number one passion is cooking. It’s what I love to do the most. So I tell my friends on a Friday night at 8:00, there’s  nowhere I’d rather be than back with 20 slips in front of me and the buzz and camaraderie and having fun. It’s what I love to do.”

And while he’s definitely well loved in the dining room, customers are even happier when he’s in the kitchen cooking an eclectic tavern style menu that’s way beyond what you’d expect.

“We wanted to give people something that you can’t get at every corner pub. For us, and for me especially, it’s a lot of fun to see people look at the menu and see the food come out. They’re kind of surprised by either the way it’s presented or what exactly the dish is.”

The appetizer section of The Gavel House menu is lined with a selection of starters that are way beyond the norm.  There’s tangy buffalo cauliflower topped with crumbled bleu cheese and ranch.  Or if you prefer your buffalo traditionally, get it slathered on some wings.

“I’m a huge wing guy. I always have been. But our wings, we house-brine them. We cook ’em twice and then we have 12 or 13 different sauces that we offer with them.”

One of the sauces that’s a must have is the Kung Pao that tastes exactly like an Asian entree.

“If you go to a Chinese place and you get the kung pao chicken you get that sweetness and the savoriness and then you know with the toasted sesame seeds and scallions on top, it makes it sticky and delicious.”

And for a Canadian classic with an Irish twist, get the Gavel Poutine- topped with sharp cheddar and a Guinness gravy.

“I think the Guinness gives it a little bit of a bite and you can taste the maltiness and the oakiness of the Guinness in the gravy, so it’s different than just a traditional brown gravy. It’s awesome.”

There are sophisticated ways to kick off your meal, like tender New Zealand lamb lollipops served over mint chimichurri or the tongue tantillizing bacon wrapped shrimp.

“We take jumbo shrimp, dust them with a little bit of Cajun spice, wrap them in Applewood-smoked bacon and then we grill them over an open flame. We serve that over our cowboy caviar, which is just black bean and roasted corn salsa with avocado or ranch aioli on top. t’s one of my best appetizers.”

One of the most interesting ways to start your meal would be with the Gavel Caesar salad; a delicious dish that was created by a very happy and tasty accident.

“It kind of happened by mistake one day. I dropped a pan of Parmesan cheese in a hot skillet one day and when I took it out with a pair of tongs, it molded into a bowl shape. Since then, we take our Caesar salad and we melt down Parmesan cheese in a pan and then we flip it over onto a bowl and it sets, and then that’s what we serve our Caesar salad in, becomes an edible cheese bowl. Some people actually start by eating the bowl first and then work their way through the Caesar salad, because I think, personally, I think the cheese bowl’s better than the salad itself.”

From there, you can move onto one of the Gavel House’s outstanding entrees.   There’s the Rise and Shine Burger- delicious at anytime with a pile up of bacon, an over easy egg and a hash brown, a hearty Short Rib Casserole topped with tater tots and sharp cheddar and one of the biggest portions of Fish and Chips around.

“I heard a couple people say it looks more like a surf board than a fish and chip. We use nice, fresh, local haddock.   We use Harpoon IPA beer batter, which gives it a nice thick crusty outside and then when you get into the fish, it’s perfect.”

“Instead of doing a traditional chicken parm, which I think you find on a lot of menus, we decided to switch it up a little bit.  We use two hand-breaded chicken cutlets served over mashed potatoes with the Guinness gravy and Irish cheddar. It’s really good.”

And the end of your meal will be really great, with a slice of homemade Carrot Cake- so big, you may want to share.

And with creative food, served to you fresh, the only thing you’ll be guilty of is having a great meal at the Gavel Public House