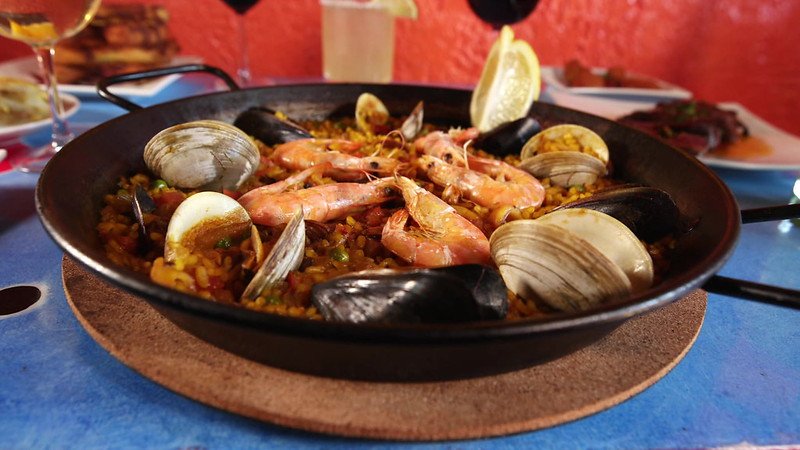 Located on Commonwealth Ave in Brighton, Tasca has been one of Greater Boston’s most beloved Spanish Tapas restaurants for almost thirty years. And this lively hundred seat spot remains as popular as ever, thanks to chef-owner Joaquin Galan, who grew up on the southern coast of Spain, and in the restaurant business.

Joaquin Galan – Chef/Owner, Tasca: “I grew in Malaga and my parents had three restaurants. And I grew up in the kitchen with my mother and father cooking all the time. And then I came to this country kind of running away from restaurants, but I ended up in the restaurant business, because it’s in the blood.”

Joaquin is not only a chef, he’s also an artist, as evidenced by the beautiful dishes coming out of his busy kitchen.

Joaquin Galan – Chef/Owner, Tasca: “Cooking is a form of art. Yes. And every dish I do, I put my love in it.”

He also expresses his art in more traditional forms, like in the beautiful painting of his wife, that’s proudly displayed in the dining room.

Joaquin Galan – Chef/Owner, Tasca: “That painting there is my wife. She’s a flamenco dancer. And I did that painting just for the restaurant.”

The art of hospitality is also on full display at Tasca, courtesy of Joaquin’s General Manager and longtime friend Armando Zapata.

Armando Zapata – General Manager, Tasca: “My thing is people, dealing with people, introducing them to dishes, serving them, and making sure that they are comfortable, making sure that they have what they need. Making sure that if they need something else, you immediately jump and go to the table. That action keeps me going, because everyone at some point needs something, and you need to be there.”

With so many tapas to choose from at Tasca, deciding where to begin can be a challenge. But to taste something truly traditional, start your meal with the Tortilla Española.

Joaquin Galan – Chef/Owner, Tasca: “The Spanish Omelet is onions, potatoes, and eggs, made with olive oil. And that’s very typical from Spain. It’s a dish that you will find in any bar around Spain.”

Armando Zapata – General Manager, Tasca: “It gives you a sort of a starting point of the evening. You start there and then you go to other dishes.”

Those other dishes include golden fried Iberico Ham Croquettes, homemade pork sausages sautéed in Sherry, and Patatas Bravas – potatoes that are crispy on the outside, creamy on the inside, and covered in a spicy sauce.

Joaquin Galan – Chef/Owner, Tasca: “The brava sauce is a recipe that my mother used to make. And out of my memory I put the recipe together, and voila.”

Another recipe with a delicious connection to Joaquin’s home are the crispy fried eggplant sticks served with sugar cane sauce.

Joaquin Galan – Chef/Owner, Tasca: “The eggplant fried is from my area from Spain, Malaga. And we are very famous for sugar cane. And we make this sugar cane honey. So the eggplant is cut into fingers. We attach the breadcrumb, and it becomes very crispy and creamy inside. And with the sweetness of the sugar cane honey, it makes a nice flavor.”

There are plenty of meaty options on Tasca’s menu, like grilled lamb chops with a mint yogurt sauce, Duck Wings in a triple sec, orange, and cinnamon sauce, a perfectly cooked skirt steak served with chimichurri, and a four-ounce grilled beef tenderloin, with black pepper cream, atop fresh baked bread. And this dish might be one of the best meal deals in all of Boston, priced at just thirteen dollars.

Joaquin Galan – Chef/Owner, Tasca: “Certain dishes like that one, we’re not making much. But it’s such a good dish I want people to try it. Well, we don’t make much profit. But we have a good dish for the customer.”

Seafood selections at Tasca are plentiful. For tapas, there’s Octopus, Squid, Salmon, and sizzling Shrimp in garlic oil. For a bigger dish, try the Catalán stew with angel hair pasta, shrimp, calamari, mussels, and clams in a lobster broth. But for a full feast of the ocean’s bounty, you simply must order the Seafood Paella.

Armando Zapata – General Manager, Tasca: “When you say Spain, you say Paella. Paella is a signature dish of Spain. Ours, it’s an art. The way that you prepare it, it’s an art.”

Joaquin Galan – Chef/Owner, Tasca: “We make it with the sofrito, and then we do the squid, the mussel, the clams, and the shrimp. And it goes in a lobster and shrimp broth.”

And it’s a wonderful way for customers to complete a culinary vacation to Spain.

Joaquin Galan – Chef/Owner, Tasca: “I want them to come here and feel like they’re in Spain. That they forget they’re in Boston. And once they go out they realize ‘oh, we’re still in Boston, but we felt like we were in Spain.’”