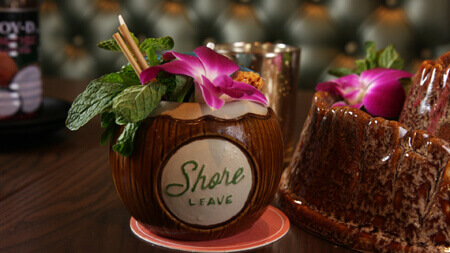 There something about tiki bars that can transform the doldroms into a delight.

And at a brand new spot in Boston’s South End called Shore Leave, the classic Tiki experience is getting spiced up with a more refined, modern twist, according to Partner and Beverage Director Ryan Lotz.

“Shore Leave is our below ground tropical vacation bar. We are actually just about two flights underground here in the South End.  You come down two flights and you open up into, I always describe this space as feeling like you’re in the kind of ballroom of a ship, because you don’t really feel like you’re underground.  Making it feel a little more like you’re grabbing a cocktail when you’ve just stepped off the beach.”

“You’re going down two, three, four flights of stairs. You’re in a basement. You get to hunker down and forget about everything outside, whether it’s the climate, what your day was like, and then just hang out with some friends, drink some cool tropical drinks and eat some delicious food.”

“Super crunchy.Then a bunch of lime zest and lime juice to put on there for some acid. I think they’re unbelievable chicken wings. They’re so good you don’t need a sauce to dip with them.”

If you do want to get saucy, Shore Leave’s signature Dan Dan Wontons are the way to go.

“So Dan Dan noodles are a really traditional Sichuan Chinese dish.  It’s traditionally a noodle dish.  And We wanted to turn that into a kind of dumpling.”

So it’s pork filling but it’s whipped with a whole bunch of fermented black beans. Then we have pickled mustards that make up a sauce with some of the Sichuan chili oil, a bunch of scallions. It’s all those flavors but wrapped up in an individual bites so they’re really, really easy to share.”

Another popular bite is the pork belly bao, or you can get it with a local twist if you go for the fried clam version.

“It’s like having a clam roll when you’re down at the Cape, but we’re doing it with a little more Asian flair

So It’s the very soft bao roll that’s steamed and then we make a tartar sauce using a whole bunch of chopped serrano chili’s and some Dashi pickles. Then we toss that with some shredded cabbage and that goes in the bao with the fried clams.”

If you’re craving something bigger than just a few bites, check out the katsu sandwich featuring a thin-cut pork cutlet and kewpie mayoon impossibly soft and rich Japanese milk bread.  Or you can go all in and order the lacquered Rohan Duck.

“So the Rohan duck, it’s an incredible whole roasted breast and confit leg meat.  That gets roasted with honey and then it comes with moo shu pancakes that we make in house, the bao buns, a ton of herbs and condiments. We make our own sriracha in house with grapefruit. We make the hoisin pineapple sauce that comes with it.  It’s great. It feeds easily four incredibly hungry people, up to eight people who wanna snack.”

And as for the drinks, well, they might be even more fun, flavorful, and colorful than the food… all mixed right in front of your eyes, served in all kinds of crazy, custom-made ceramic vessels, and garnished with plenty of flair.  Take for example, the eponymous Shore Leave cocktail.

“We have taken a local rum from Ipswich, from the Privateer Distillery, which is a silver rum. We’re blending it with a Jamaican rum. We’re gonna add in a little bit of passion fruit for that tropical flavor, some lime for some acid, molasses which is just a really traditional New England flavor, Madeira which was actually a really common drink in these areas during colonial times, then a little bit of angostura bitters for some spiciness. That drink is gonna be a big pop of flavor. It’s gonna be tropical right off the bat, you’re gonna get a lot of acidity, but you’re gonna get a lot of nuance from the rum, especially the two different kinds of rum. You’re gonna get richness from the molasses.   It’s awesome.”

“The show is like watching all our amazing bartenders making the drinks behind the bar. And interacting with them.  The most important thing for people to come is this is like escapism at it’s best. You come down, you forget about everything else that’s going on, just sit back and enjoy each others company. Because it’s a place to hang out and interact with each other.”

“Primarily we hope people have a blast here. We hope they walk in and they have fun, but we also hope that they feel relaxed. That they kind of settle in and they hang out with us for a little while. From the moment they make it down the stairs and they set foot in our space, they feel like they’re on vacation.”