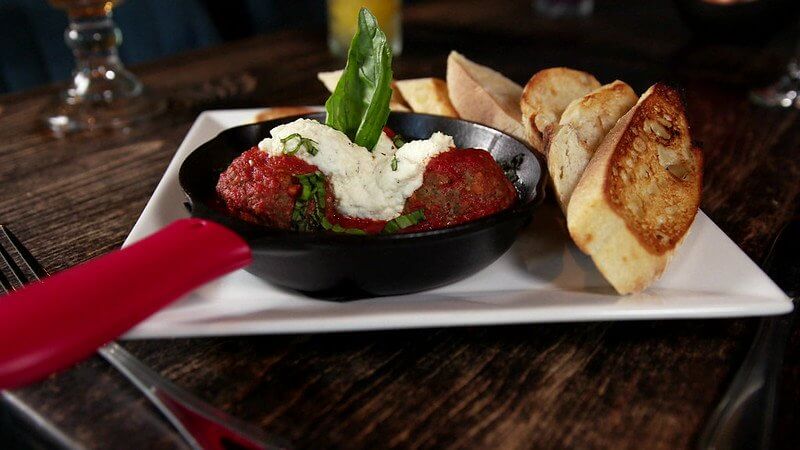 When it comes to cooking, there’s something to be said about keeping it simple.

“Somebody’s going to be able to come in and look at the menu not be confused by what’s on the menu. We wanted to make food that people can enjoy. We call it feel good food. When you eat it, you’re gonna feel good.”

And sometimes all it takes is a little bit of Salt and Stone.

Located at Assembly Row in Somerville, Salt and Stone is a stylish spot created by owners Sean and Sue Olson, industry vets with over 28 years in the business.  Here they’ve opened a space perfect for any occasion- whether you want to throw back a beer with a quick snack or something more formal.  And it’s all done with dueling ovens, right there in the middle of the dining room.

“We have two different ovens. One’s a woodfired oven.  It’s primarily used for our flatbreads our meatballs.  The rotating gas oven is something we put our cast iron pans in,  keep it at a set temperature it rotates. They’re great ovens and each has their use.”

And while you can eat in the dining room, on the patio, or at the bar. The best seats are lined along that open kitchen, where it’s more like dinner AND a show.

“Everything is done out here. Right from anywhere from the soups, the salads, the flatbreads, the raw bar, the saute, cooking the steaks, the seafood, the desserts. Yeah, it’s all coming from here. So those fill up pretty quick because people love to be able to sit around and watch the culinary team.”

And that culinary team is creating a line up of all of your favorites.

“I think it’s a fantastic menu.  Big portions, but not too big.  And we wanted to do the items on the menu, the best that they can be made, we didn’t want to have a 10 page menu because you can’t make everything right. And that’s what our goal was.”

There are many ways to kick off your Salt and Stone experience. From big platters of fresh seafood like oysters, clams and shrimp. A cast iron skillet of juicy meatballs, smothered in house made marinara with crostini. And flame kissed rosemary sea salt chicken wings.

“The wings are cooked in the oven at 750 eater and degrees. They are seared to hold in all the juices from the outside. So you bite into that wing. It’s not fried. It’s not kind of greasy. It’s just a roasted natural wing and it’s fantastic.”

“The sauce is a shallot butter cream sauce with fresh lobster meat, fire roasted corn goat cheese and buffalo mozzarella. The crust is kind of crispy on the outside but it’s a little soft on the inside. It’s really something different.”

You can also fill your lobster fix with Salt and Stone’s overloaded lobster roll served on buttery brioche or the indulgent Lobster Ravioli.

“So our lobster ravioli is five beautiful lobster raviolis filled with lobster meat and ricotta cheese finished also with the shallot  buttercream and then topped with fresh crab meat and fresh shaved Parmesan and a chiffonade of basil.  It’s decadent.”

If beef is your thing, there’s a gorgeous Center Cut Ribeye, served with smashed potatoes. And one of the best burgers around.

“It’s a jumbo burger. It’s 10 ounces. So when people see it, they’re like, Oh my god. A bacon aioli on the bottom, swiss or cheddar cheese. You take your pick a crispy slab bacon on the top, and then onion straws. And it’s just a really great, great burger.”

Other entrees include aromatic Mac and Cheese- made with a blend of sharp cheddar, swiss and parmesan, and hit with some truffle oil.  Or the light but satisfying Ahi Tuna.

“It’s a beautiful piece of ahi tuna, crusted with sesame seeds…Just barely seared .sliced and fanned out on on the plate served with a wasabi aioli. It’s unique.”

On the weekends, Salt and Stone offers a beautiful brunch with sweet options like the Creme Brulee French Toast featuring cinnamon bread dipped in a creme brulee batter, topped with fresh fruit, and drizzled with plenty of maple syrup.

And for more of that fresh lobster, try the Lobster Benedict.

“The lobster Benedict. It’s on the large English muffin, poached eggs, the Hollandaise and then the fresh lobster meat and there’s a lot of lobster meat on it.  The lobster benedict is fantastic.”

And you too will find every dish is worth its salt at Salt and Stone.