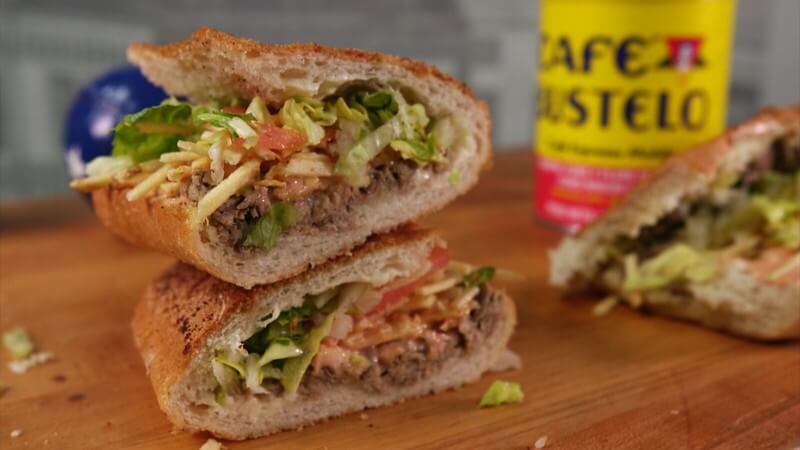 For Sam Cortiella, food is all about love.

“I love people, people give me energy. And so meeting new people all the time and getting to put a smile on people’s face So being here is a dream come true.”

And for him, running a restaurant is a sport.

“I played sports my entire life. So business is about team sports.   It’s about the practice and the prep to get ready for the game. So when the game comes, we’re ready to go We have each other’s back and it gets a little hectic but you know what everyone knows that we have each other’s back and we are going to make sure to finish strong to the end.”

And you will finish every last bite of your sandwich, when you eat at Papi Vivi.

“We love food. We love sandwiches, and my dad’s from Puerto Rico. So I wanted to make sure that she knew about being a Puerto Rican American. And so it was really important that we kind of combine those things well, forming that father/ daughter bond.”

And when he relocated to his home state of Massachusetts, he decided to take all of that Puerto Rican flavor to the locals of Lynn.

“Puerto Rican food is all about flavor, right. So most of the dishes are in sofrito.   And there’s a lot of garlic that that kick a garlic is that the real flavor, not so much salt, but that beautiful flavor that comes out in all our food.

And whether it’s their hand-rolled empanadas or their oversized sandwiches, they cannot seem to get enough of it.

“We get a couple of calls, saying Hey, man, that was one of the best sandwich I’ve ever had.  And it’s just awesome to hear.“

Any first timer needs to go for it and order Papi Vivi’s Tripleta.

“So what a tripleta is is is a Puerto Rican street sandwich,  What we do is we  marinate in sofrito ground beef, pork shoulder, and a chicken breast. goes in one sandwich garlic butter on top, we have American cheese in their, potato sticks, which gives it a little bit of a crunch lettuce, tomato, and then our Papi Vivi sauce,  that gets the extra boom.  That flavor is going to explode, you’re going to have a different bite almost every single time. You know, it’s it’s definitely an experience”

And not only can you get all of the flavor of the Tripleta as a sandwich, you can also get it in burrito form and over fries.

“It’s a messy thing.  We like to cook those well done because you know, get to that extra crunch in it. We put the cheese sauce  on top, put all the meats the three meats covering the sauce. And then on top of that we do the house sauce. So I mean, it’s a lot of food, but it’s packed with flavor.”

Besides all of that tripleta flavor, Papa Vivi offers a variety of sandwiches you’re going to want to sink your teeth into€¦ all so over-packed, they’re almost impossible to fit in your mouth.

“Some of the best sandwich in the world are messy sandwiches. It’s about the flavor, and we got tons of it.”

And for the carnivores, nothing quite tops the slow cooked pork shoulder.

“The pernil so it’s just a low and slow roasted pork shoulder we marinate it overnight, and then it’s slow and slow for at least six to eight hours inside the oven. So it’s it’s tasty that just meat pulls off the bones. It’s delicious.”

And with such a juicy sandwich, the roll is certainly key.

“The bread supposed to be the vessel So that’s why we toasted our garlic butter.  It just holds in the meat nicely. And you’re really going to get that flavor of the meat rather than the flavor of the bread.”

Another option for meat enthusiasts is the JC’s Chopped Sandwich- named for Sam’s dad.

“That’s my father. He’s really special to me he’s originally from Puerto Rico. So a chopped cheese is like a cheeseburger originated in New York City in the bodegas, but we put our little Puerto Rican spin on it with the Papi Vivi sauce and the potato sticks. It’s delicious.”

If chicken is your more thing, the Sofrito should not be missed.

“Yeah, sofrito Chicken is marinated heavily in sofrito, it’s all packed with power, like I said, culantro, cilantro, and all our peppers and onions. And so it just packs you flavor punch for you. And it’s one of our favorites.”

And when it comes to his sandwiches, this owner could not be prouder, and would put his product up against pretty much anyone in town.

“I just think it’s something that everyone can enjoy. Right? It’s not pretentious. It’s something that people can afford. And that’s really good. I mean, I’ll put our sandwich up against anybody in Boston.  So instead of buying, going out and buying a filet mignon for 50 bucks, come on to Papi VIvi and buy a sandwich for 10 bucks.  You will just you’ll be just as happy. if not more, I promise you that”.