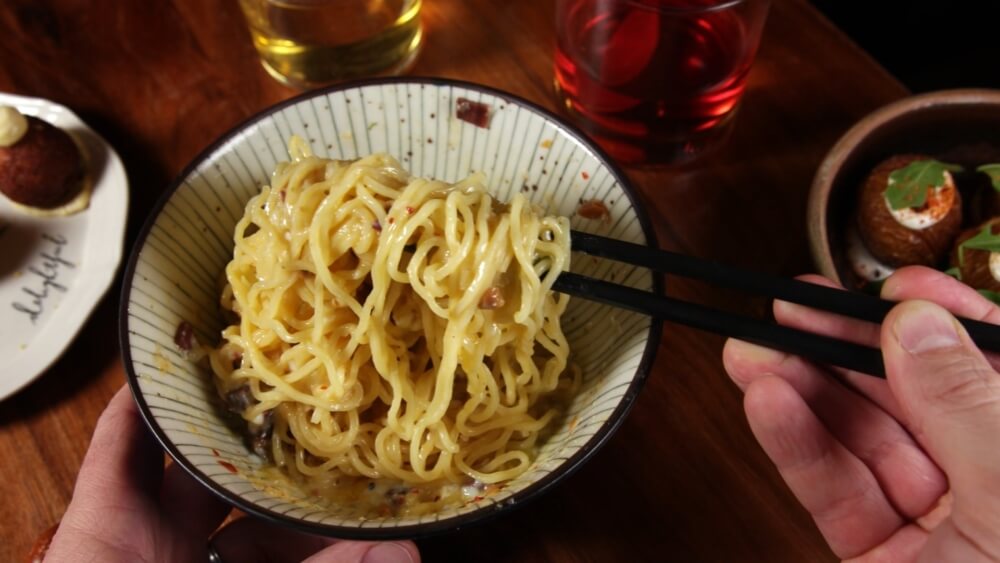 And her dear pug, Pearl.

“She’s a kisser.  She has smelly breath.”

So when it came time to name her restaurant, the only word that made sense was the Japanese word for Pug, Pagu.

I was thinking about the name and nothing stuck.  I always had my pugs around to kind of inspire me.  And I just realized, Oh, we should name it after the dogs. And then I thought Pagu. and it always makes me happy I never can be you know upset at pagu so it’s stuck.

And you’ll never be upset with a meal at Pagu.

Located in on Mass Ave in Cambridge, Pagu is a Spanish/Japanese tapas concept set in a sleek, stylish space with a beautiful bar, an open kitchen, and a comfortable dining room Tracy designed to make customers feel at home.

“Hopefully it’s like a warm embrace.  It’s a lot of warm woods that are all naturally finished.  And, you know, kind of all the artifacts here anything that you can touch, I’ve kind of taken the time and detail to pick out every single one. So I would hope that…it feels very homey, as I would have, you know, designed the extension of my living room, my kitchen.”

Tracey is no stranger to the restaurant industry, having grown up in her grandmother’s Japanese restaurant in Cambridge.  And Now at her own place, she does a unique blend of east west cuisine.

“So my background comes from cooking in Spain, as well as cooking Japanese food as a kid. So I combine those two passions and what you know, I like to eat selfishly. What I was cooking at home and decided to, you know, cook it in the space called Pagu.”

There are many tasty options on Pagu’s menu but nothing quite compares to the Cheesy Waffaletto.  This gluten free snack is packed with smoked mozzarella and caramelized shallots is great as a bar snack or a starter.

“It’s crispy on the outside, nice and warm, creamy, melty cheese on the inside. And it tastes like bacon but there’s no bacon in it. That’s from the caramelize shallots and the smoke mozzarella that both add a lot of umami to the waffle.And you know, from two to six, you can get it for $1.”

Other apps include a curry crab croqueta served with a Peruvian pepper sauce.

And this super crispy version of patatas bravas made with hasselback potatoes so every bite is ultra crunchy.

But the bao section of starters is THE must try with an option for every palate.

“What we’re probably most known for is our bao.  Sometimes it’s completely enclosed like a dumpling and other times, it’s kind of like a wallet shape, which is what we do.   I say wallet because we’ve been made of  squid ink one that’s. Jet Black. And it like people have taken out their wallets and been like, hey, this looks just like you know, the same size and kind of shape of my wallet.”

That squid ink bao is stuffed with a panko crusted oyster and purple cabbage for an Asian take on a po’ boy.

While the Green Pea bao is a great vegetarian option loaded with papaya salad and thai basil.

But the Pork Belly Bao is Tracey’s personal favorite.

“It’s what I grew up eating. It’s what you would find on the streets of Taiwan. It’s got braised pork belly,

Ours is packed full of star anise but because pork belly is like striaded there’s a fatty part, there’s the meaty part.  And then you have the crunchiness the of the peanuts, the fried shallots, and then the crunchy pickled cucumbers. I think it’s great.”

You won’t go wrong if you order one of Pagu’s noodle dishes.

Whether you go for steamy Guchi’s Midnight Ramen topped with unctuous pork and a 6 minute egg.

“It’s a play on carbonara.  I use ramen broth, jamon scraps from jamon Iberico with ramen broth, a nice creamy 62 degree egg and just mixed into you know, ramen noodles.  So it’s essentially like a pasta  I think it’s a must try at Pagu.”

Other entrees you must try include the Spanish style tortilla layered with onion and potato and topped with torched goat cheese. And the crispy crunchy Chicken Katsu.

“Chicken katsu is delicious.  It’s fried chicken. Everyone needs fried chicken.   It’s always breaded, perfectly fried in panko crumbs.  We make our own aioli.  We have crushed sesame seeds on top. And it’s just, it’s just so tender and juicy.  When you just bite into chicken katsu. It’s like. you’re a kid again. Like you just Have all those feelings of snacking and like joy.”

And the delicate Cedar Campfire Black Cod.  A feast for your mouth and your nose.

“This shows up to the table on fire. Maybe against Cambridge fire code a little bit.  So people are excited to eat this dish because they can smell it just before it gets there. So I think it’s very enticing, kind of whets your appetite even before you dig into it.”

“When I see a giant ice cream cone, I get really excited when that ice cream cone has a green swirl on it. That means it’s going to be matcha soft serve.”

And with dishes this tasty, there’s no way you’ll need a doggy bag when you dine at Pagu.