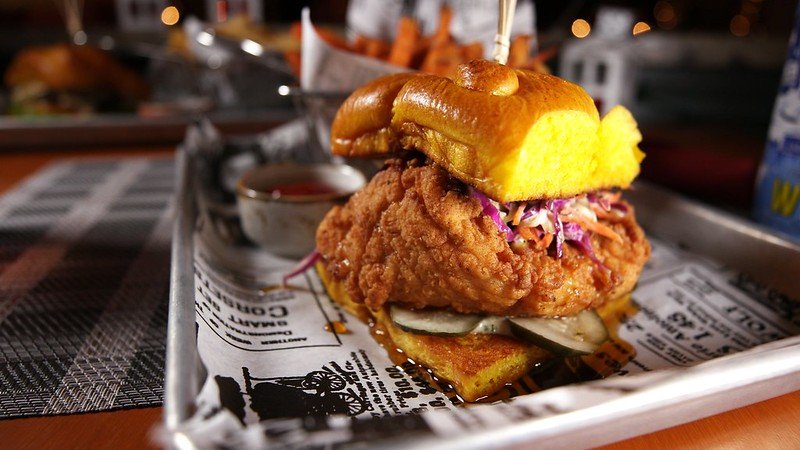 According to Greg and John Murray, if you love what you do, you’ll never have to work a day in your life.

“It’s not a job. It’s something we love. So when you come into work every day, when you wake up, boom, you can’t wait to get here.”

And with food and hospitality like this, you too will be excited to get to Murray’s.

Located on Broadway in Revere, Massachusetts, Murray’s Tavern may be new to the neighborhood, but it’s a restaurant that’s been decades in the making.

“This is a dream of ours, which we began back in the blizzard of 78.”

“I was a junior in college.”

“And then we know the history.  It snowed day and a half.   I looked for a partner to go out and shovel. And Greg was the first one, I’ll do it. Right up, boom, first up in the morning, he’s ready to go.”

“It took two full days to do. But we did it together. And from then on, it’s been a connection John and I have had since that first experience together. So it’s been a dream of both of us to open up our own place someday.”

The brothers’ goal?  To build a place that reminded them of the restaurants they frequented back in the day.

“We grew up in those places. We had those neighborhood places that we went for everything. We wanted to bring that back.”

And what they’ve “brought back” is a comfortable spot with a menu that goes way beyond your average neighborhood tavern.

“We take great comfort classics and we elevate them.  We give them our spin. Our extra ingredients. The way we cook it.  The way we prepare it.  Where we source it. We keep it local”

Starters at Murray’s are all scratch made. From the aromatic Vietnamese Wings to these meatballs made with an old family recipe.

“Everyone has different favorite family recipe and so do we in the Murray Family.  It’s the way we make them. The way we handroll them to the way we bake them. And then we cook them in the marinara. They’re tender.  They’re like butter.  You got to try it.”

They also knew they had to nail it when it came to Chicken Parm.  But they wanted to do it the Murray way.

“So let’s do a chicken parm eggroll. It’s not only just the egg roll, but it’s a marinara that comes with it.  And then it’s that little dollop of pesto on top of each egg roll. That just ties the whole experience of the Marinara, the crunch of the egg roll. So it’s all about taste and texture and you get it all in the eggroll.”

“When you create that double stack with the homemade pickles, the Alabama white sauce, the truffle ketchup. You put it all together toasted buns and then you melt that crucolo cheese flowing down there like like a volcano with the lava.  You got to lean over your plate because all of those juices start coming out.  You can’t have a tavern not a great Smashburger.”

If you want a big bowl of pasta, Murray’s has you covered, with slow simmered Bolognese and big bowls of mac and cheese- all using the Murray’s favorite pasta, radiatore.

“The radiatore is just a magnet for just sucking up the sauce. It looks like a radiator.  It has all the slots. So guess what? All the sauce is going into the slots.  You have two or three bites of that and it’s like it’s like a meal on itself. It’s the way the cheese is blend. The crucolo, nice aged Gouda and the fontina. It’s delectable.”

The entrees at Murray’s run the gamut. From tender Spanish Octopus topped with Mango Salsa. To Pan Seared Salmon over Roasted Butternut Squash Risotto. To good ol’ Fish and Chips. But the 8 ounce pan roasted filet mignon is the real show stopper of the place.

“It’s a beautiful tender piece of meat.  We’re serving it with asparagus and homemade garlic mashed potatoes.  We serve with a bordelaise sauce, but we garnish it with a little chimichurri on top to complement that dish.”

At dessert, the Screwball Waffle is an absolute must.  Topped with peanut butter Cup Gelato and a Screwball Peanut Butter Whisky Caramel, this dessert is so good, you probably should order two.

“You get the warm waffle. The ice cream is melting.  The screwball glaze. People fight for it. So now people that know it, they don’t order one.  They order two.”

And what began in a blizzard, has become a warm, cozy place you’d want in your own neighborhood.