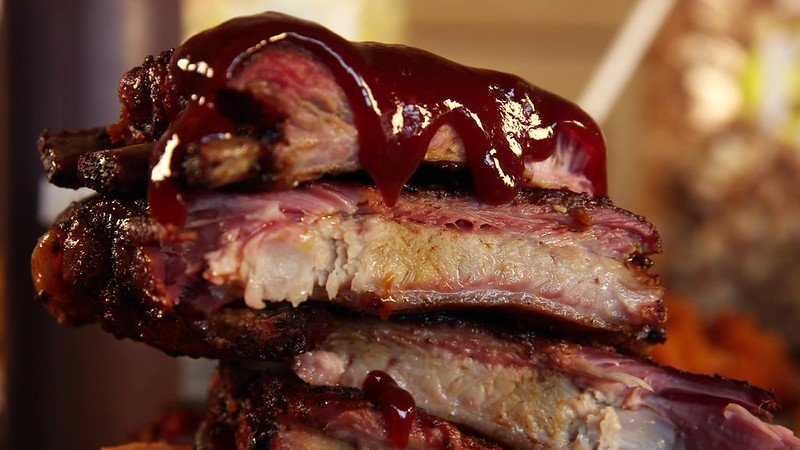 When the smoker is smokin’.

“The smoker is an all wood fired. So we have a live fire.”

And the corn’s a poppin’.

You know you’re going to be in for some Good Stuff.

Located in Blackstone, Massachusetts in Worcester County, Goodstuff Smokehouse is a hobby that turned jobby for brothers David Forgit and Keith Miller.

“Started as a hobby. It started as an oil tank welded to a barrel. And that was what we cooked on for a few years and started bringing it to friend’s houses. We would cook barbecue and then all of a sudden, people wanted to pay for it.  And it just took a life of its own. It’s snowballed to where we are today.”

So they set up shop in this casual, come as you are space- and incorporated all of those years of trial and error to create what they refer to as “New England Style BBQ”.

It all starts in their smokers, affectionately named “Cheech and Chong”- because well they’re smokin’ all right which is evident from the second you pull into the parking lot.

“It’s the biggest advertising piece that we have as a company, and then the smell that just permeates from that entire area. We custom designed them. They’re very simple machines, you know, cavemen cooked with fire, and we’re not doing much different than that. It’s just trying to control it a little more.”

Every meal at Goodstuff should start with some chicken wings, slathered in honey bourbon sauce or garlic parmesan.  Plus, there’s the so-called Pile Up fries.

“This was born out of my hate for nachos. So we use our tallow fries melted cheese, shredded cheese, pulled pork lettuce, jalapenos and sour cream.  It’s a lot of French fries, a lot of food. So typically, it’s one to get..if you’re gonna share.”

And then there’s the candied bacon- served with an egg for good measure.

“Candied bacon is one of God’s greatest inventions. But it’s a real slab bacon and it’s got a sweet, spicy peppery glaze that we put on it served with an egg to dip in. It’s life changing? It really is.”

There are traditional BBQ platters loaded up with slow smoked meats like pulled pork and beautiful sliced brisket.

“It’s some of the best I don’t want to sound too cocky here. It’s very tender. I’ve had people from Texas. Tell us that as some of the best we’ve ever had. You get an explosion of flavor from the smoke and a little bit of rub that’s on it.  A little bit of heat for the binder that we use. And then it’s just melts in your mouth. It really does.”

You could opt for their thick-cut, melt in your mouth pastrami. Or try something the brothers refer to as the “Boston Spare Rib”

“It’s St. Louis cuts spare rib, but we leave as much of the meat on it as possible.  So you get an absolute massive piece of meat and being Boston is kind of just bold and in your face with everything. That’s where the name came from.”

Beyond traditional BBQ, Goodstuff offers a variety of dishes like this enormous 1 pound perfectly cooked ribeye.

“It’s big. It’s more than then you should have for dinner for sure. But it’s not more than I have had for dinner. It’s an impressive plate for sure.”

Or you can really pig out with a Fat Pig Burger- a certified bacon lovers dream. .

And if the burger doesn’t satisfy your pining for pork, the bacon wrapped cheddar meatloaf most certainly will.

“We wanted to do a meatloaf because everybody loves meatloaf….But we wanted a roll in the barbecue with it. So it’s a little bit of a southwestern seasoning. And then we wrap it stuff with cheddar cheese and smoke it and it’s incredible.”

There are loads of sweet stuff offered at Goodstuff. From creamy dreamy banana pudding…

To a float made with housemade root beer.

“The root beer is creamy. There’s a lot of vanillas in it. So it pairs really well with the French vanilla ice cream that we use, and it’s just to die for.”

But for a true Goodstuff experience, a bag of fresh-popped kettle corn is a must- and it’s not only delicious- it’s entertaining too.

“It’s a show it really is. Everybody gathers around. We do it right on the patio next to the smoker. People want to watch it and then because there’s a crowd that we always give our warm samples and that always hooks people.”

And for these brothers, what began as a hobby for fun, remains a good time at Good Stuff Smokehouse.

“Seeing customers and kids having a great time and covered in grease and full bellies and big smiles is the greatest feeling in the world.”