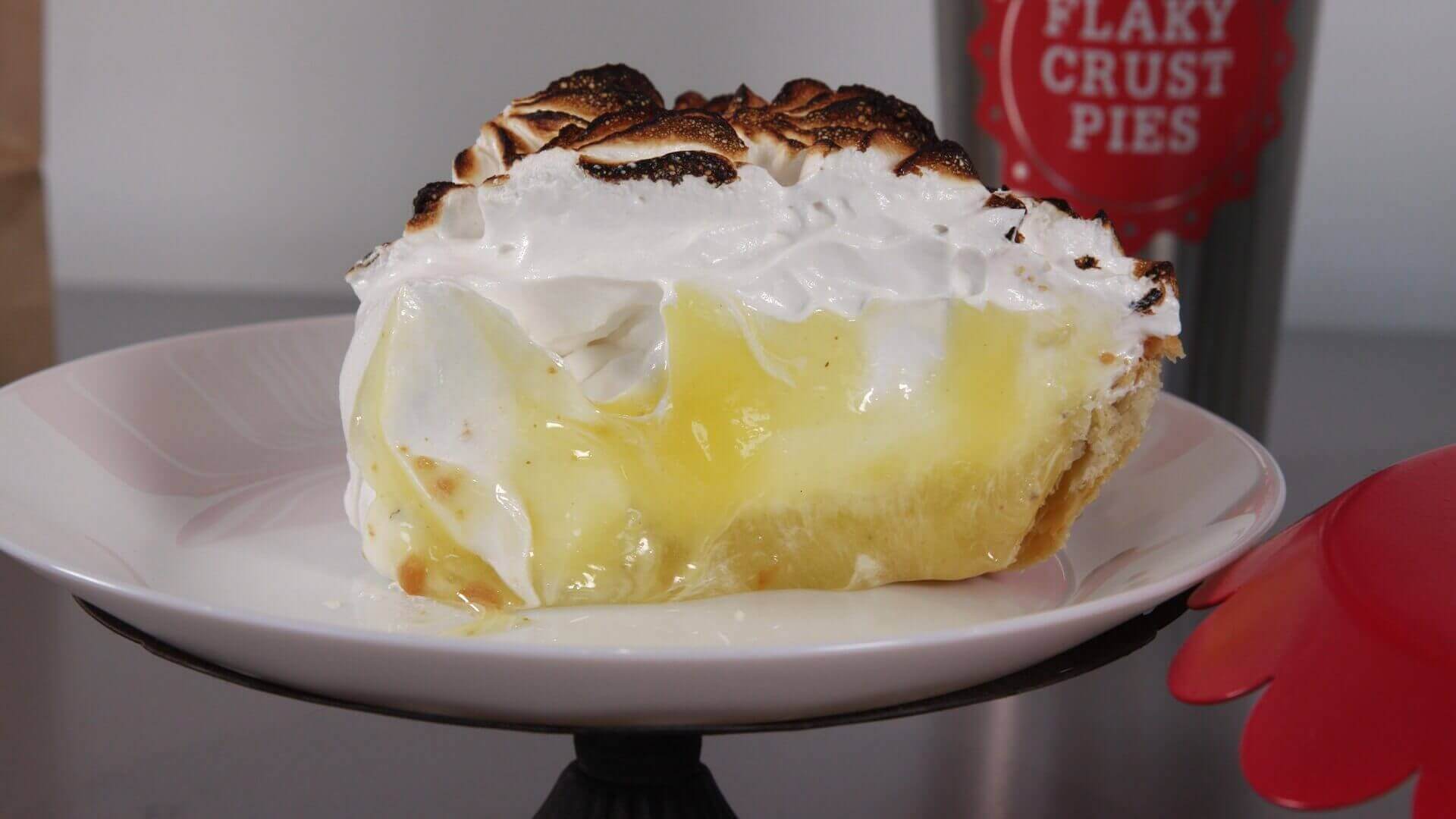 I went for the lemon merengue.

My favorite is the chocolate creme.

I like pie because you really can do anything with pie. We try to honor the traditional pies like apple and chocolate creme, but we also like experimenting and testing out new things, new fillings on both the sweet side and the savory side.

It’s the home-cooked feel. They’re made with love and she keeps coming up with new flavors, so it’s really hard to resist.

I just wanted to make a product that would give people good memories, make them remember eating grandma’s pie, but also make it high quality of just bringing some life to pie.

The pies are just so filling. You can’t stop eating them.

Hi, my name is Ashley Nichols and welcome the Flaky Crust Pies.

Flaky Crust Pies is a pie shop in Norton, Massachusetts. We offer a variety of made from scratch sweet pies. We also have savory potpies like chicken pot pie, chorizo and rice pie and French meat pie.

Yeah, the crust is definitely fantastic.

The crust is the secret ingredient.

For our pie crust, it’s all butter pie crust. So, what that means is that it is very flaky like the name says. We get in cases of butter every week. It’s a big brick and we literally dice up the butter to make the dough. We portion it out.

We are rolling out the pie crust. We use a machine to help us because we have to roll out a lot of pie crusts. We flower the little disks of dough and then we flatten them just slightly. We send it through this machine and then we put it in the pie tin here. After that we put the filling in and we crimp everything by hand.

When you get the edge of that crust, you’ll be able to see the layers of the flakes cause the butter really helps with that and it gives it a great taste.

I love it. The taste is fantastic. I don’t think anything can beat it cause there’s nothing else like it around.

The apple pie, it’s very traditional. I wanted to keep it simple and to honor the traditional apple pie.

Right now we’re making the apple pies. We’re putting a little mixture of flour and sugar in the bottom to kind of keep it from getting soggy on the bottom and we weigh out the apples into each pie, and then we fold it under. We give it a little brush with the egg wash and then we sprinkle this sugar on it and that’s what gives it a nice shine after we bake it off.

I think it’s really good. The apple pie, it’s one of the pies that we always have on the menu unless we sell out.

The chicken pot pie is so special because we use all made from scratch ingredients. For the chicken pot pie gravy, what we do is we cook down onions, celery, carrots, garlic. We cook it down till it gets nice and soft, and then we add flour in to make it a rue. Then, we add in our homemade chicken stock. We bake the chicken in the back and it’s all fresh vegetables. Fresh thyme goes into it, so you really get that savory taste. It’s comforting. It’s comfort food.

The chorizo and rice is my dedication to my husband who’s from Columbia. So, I wanted to do what he says a Colombian pie. We use local Portuguese chorizo, and so we do it with onions, red pepper, green onions, and then cumin for the flavoring. It’s a really hardy pie cause it has the rice in with it too. So, it’s really like a meal in one.

Part of my vision when I thought of Flaky Crust Pies and when I was dreaming about it was to be a very welcoming place. I wanted the community to have a place to go and enjoy a made from scratch pie. So, I really try to train my employees that everyone who walks in, we say hello, we say welcome and we just accommodate them.

It’s such a welcoming place and the flavor of the pies are just wonderful.

People should come to Flaky Crust Pies because not many people make pie on a regular basis. It’s usually everyone makes it on Thanksgiving. If you’re looking for pie outside of Thanksgiving, we’re here for you.

It’s a great spot to come and get your pie fix.

The flavors, you can’t beat them. The staff here is fantastic. It’s located by the 123, so very easy find. It’s a great place. It really is.