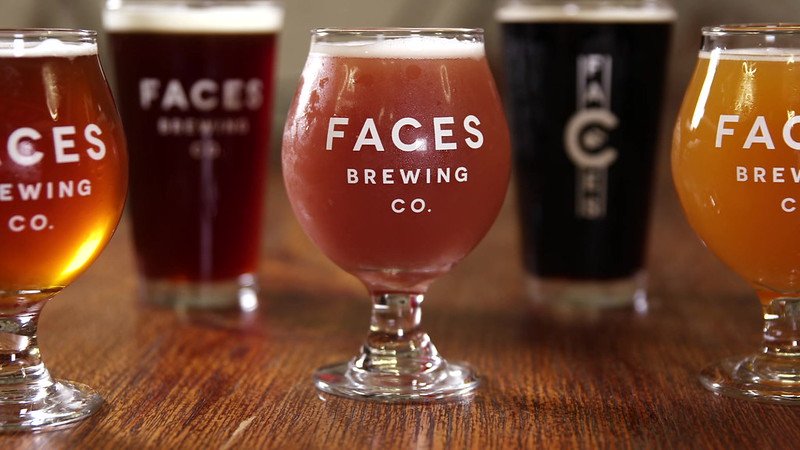 Pizza with a Pilsner.

Juicy Burgers with a brew.

And Sandwiches served alongside suds.

There are so many reasons to smile at Faces Brewing Company.

Set inside a beautiful old bank in Malden, dating back to 1901, Faces Brewing Company is the creation of  brothers Bob, Anthony, Dan and Joe Martignetti, along with their sister Julie Cotton- and this family has a long history in the business.

“Faces Brewing Company takes its name from Faces Nightclub in Cambridge; that was our father and his brothers started that club back in the 70s.  We wanted to keep the name alive after that business closed down because it was a bit of an institution in that area for people that grew up in the 70s and 80s.”

And since it is run by family you’ll feel like family, no matter what kind of night you’re out for.

And when it comes to the menu, Executive Chef Ethan Wyatt is like a kid in a candy store. Or rather a chef in a brewery using whatever is on tap to enhance the flavor is his food.

“We constantly like to take what’s in season for our beer, whether it’s a lager for a lighter, crisper fry, or whether it’s a darker beer that creates a flavor profile that’s darker and richer.  We have plenty of different ways that we can do pairings with the beers as well as melding the flavors and the cooking process itself.”

You’ll want to feed YOUR Face when you take a look at Faces’ menu with inventive options like crispy fried Brussel sprouts with pickled onions, bacon and pistachios in pomegranate molasses and this mash up of Tater Tots and Ramen.

“Ramen tots just by the name like they’re appealing to want to get cuz you’re like, what’s that going to be like? I like ramen. And tater tots are awesome.  It is safe to say that once you pop a taut, you can’t stop.”

And once you get an order of Faces’ smoked wings, you’re not going to want to share.

With flavors like Fresno Buffalo, Sweet Chili, and the palate destroying death pepper.

Other shareable items include a lineup of crispy pizzas like this one topped with Soppressata, mozzarella, roasted garlic and fried basil or this tongue tantalizing pie topped with sausage and peppers.

“So we do an Italian style sausage. We do a ginger and peppadew pepper relish that goes on with it with pizza cheese tomato sauce, a little Parmesan. It has some sweetness. It has some spicy to it. It just blends really well into a pie.”

The sandwich section of the menu ranges from classic to creative with options like this North Shore Staple- the Prime Rib Super Beef.

And if a messy sandwich is a tasty sandwich, this handheld checks both boxes.

“You got to squish it to bite it. You can’t just pick it up and throw it in the mouth. It’s a smushed down knife and fork sandwich. Extra napkins, extra wet naps.”

Another great beer pairing comes in the form of the Mac and Cheese Burger.

“So we do two, four ounce smash patties. We throw a deep fried six cheese mac and cheese patty on the burger with our house cured Blackstrap bacon. It is earthy, it is delicious. It’s hearty, it sticks to your bones.  It makes you want to drink more even though you probably shouldn’t.”

The entree section of Faces menu is lined with Chef Ethan’s specialty- BBQ.

There are ribs made with a coffee and cola brine and smoked for six hours and Beer Can Chicken- a dish that’s always juicy- thanks to all of that beer.

“We brine it in a sweet tea brine at first and then once it goes on the smoker, we’re constantly spraying it down in beer. That way you get that locked in flavor of that roasted smoky multi delicious beer but also you’re keeping in the moisture of that chicken.”

If you want something sweet, you should end your meal with Faces’ Smoked Pumpkin Pie topped with toasted cinnamon whipped cream.  And if you want to start your day that same tasty way, you should visit Faces on the weekends when they serve brunch inspired beverages along with dishes like Breakfast Pizza- topped with poached eggs, cherry tomatoes, arugula and roasted garlic. Chicken and Waffles topped with a fresno pepper infused maple syrup and Hot Pecan Cinnamon Rolls.

“The pecan cinnamon rolls are a classic.  We do a brown sugar butter. It goes with a citrus version of a cream cheese frosting and then we toast some fresh toasted pecans on the top, it just tops that whole dish off.”

And whether you’re there for dinner, brunch or just a beer.

You’re going to want to eat your face off at Faces Brewing Company.