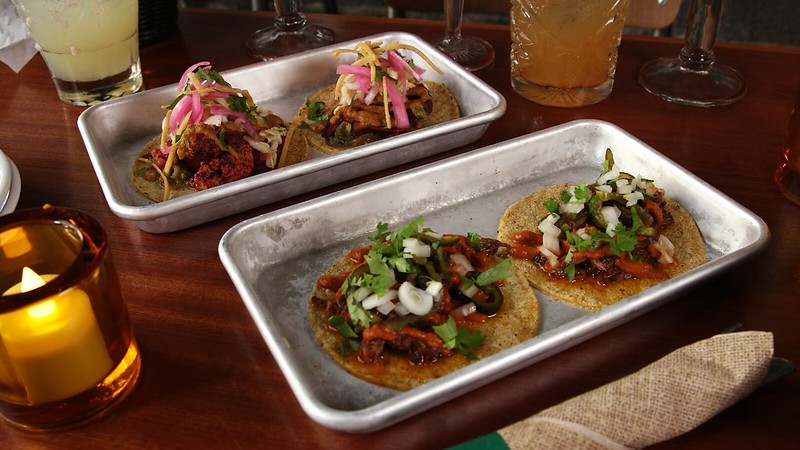 And some of the best tacos around.

For a taste of Mexico, right in our own backyard, it’s time to visit Cosmica.

Located in Boston’s South End, Cosmica is the latest installment from veteran restaurateur Jack Bardy, who brought us neighborhood institutions like The Beehive. In his latest project, he wanted to take all of the flavors of Mexico to the South End.

“Mexico hasone of the great cuisines in the world.  Super flavorful. It’s got a great spice to it. It’s very, very approachable, food. It’s casual. It’s quick. I think. It covers all the bases what people are looking for right now.”

And when he wanted the cuisine to be as inspired as the atmosphere, he called on chef Colton Coburn Wood.

“Colton is the real deal. He’s incredibly talented. He has a passion for Mexican cuisine day in and day out. He works hard.The food means everything to him, and it shows on the plate.”

After you’ve ordered a round of some of Cosmica’s tasty cocktails, it’s time to get some apps for the table.  And nothing starts a Mexican meal quite like nacho chips with dips like the house queso spiked with chorizo and chilis.

“If you’re a dip person, we got the dips going on here.”

And for a hint of smoke for your chip, add some of Cosmica’s guacamole.

“We smoke jalapenos it gets this big pow of flavor and and the cheese on top adds a salty richness to it. And then we’re putting on toasted pepitas on there as well. And that kind of adds a crunchy, earthy thing.  But it’s mostly about the smoked jalapenos. It really is. We serve it with our housemade tortilla chips.You won’t want to stop eating them. Everybody’s always ordering extra chips. And it served alongside our charred red salsa.”

There are twists on Mexican classics- like street corn- except here, it’s served off the cob- a dish inspired by chef’s trips to Oaxaca.

“I had esquite in the town square. It’s so elegant, you know, you don’t have to deal with getting all that stuff in between your teeth.  It’s just like it’s gonna satisfy your elote, your street corn craving. But it’s like it’s just a little more delicate.”

There are light and lovely ceviches, like this one including fresh tuna, apples, pears and jicama, or the spicy shrimp rojo ceviche spiked with tomato, red onion, cilantro, lime and tequila

And if you like quesadillas, you’re going to love the quesabirria.

“It’s essentially a spicy stewed.lamb in a quesadilla that seared on plancha until it gets really crispy and golden. And you dip the tortillas and some of that delicious spicy red lamb fat. And it’s served alongside some really spicy kind of tangy lamb broth, so you can dip that in there. It’s really it’s awesome It’s like, it’s like my dream.”

Having grown up on the West Coast, Colton spent a lot of time dreaming about bringing proper tacos to New England and he’s done just that- each made with the best tortillas around.

“They’re great. They’re like the real thing. You can see little bits of corn in it.  You’re getting something that’s wholesome and something that’s nutritious. There you know there’s they’re perfect for like three or four bites exactly kind of what you want for a taco. So you know, each bite is one of the best bites you’ve had.”

So you can opt for a veggie taco- loaded up with spiced rubbed vegetables, caramelized onions and a pumpkin seed salsa or get your meat on with this brisket taco.

“We rub it in. This is really amazing rub. It has a lot of dried chilies, Mexican spices.  And then the real kicker is when we confit it in beef fat. So of course that that puts a lot of richness in there.  Paired with that corn tortilla. It’s lights out.”

Equally as tasty is the tempura battered Fish Taco topped with a raw salsa verde.   Or the nostalgic  Taco.

“It’s kind of like if you grew up in the suburbs and mom used to bring home like the Old El Paso taco kits.  And then we’re putting some really great Vermont sharp cheddar on top.And then you know pico de Gallo, that just like chunky red salsa, chopped lettuce, onions, crema, which is just like sour cream, but better. And salt and vinegar, potato chips, to top it off.  So if you want to reminisce, have that nostalgia, this is definitely a taco to order. And it’s probably going to be better than mom’s.”

If a taco just won’t cut it, consider ordering one of Cosmica’s bowls.

“Because sometimes tacos just aren’t enough. I think it’s more for people who want to a bigger portion.The chicken is so great, I think because it has this ancho Yucca mash on the bottom, which is very cheesy, we put Chihuahua cheese in it, so it’s melty and gooey, kind of like mashed potatoes. And then the chicken is seared and cooked in a salsa verde.  And we put some really nice pickled veg on there and then those salt and vinegar chips to give it that crunchy thing.  It’s amazing. “

And whether you opt for tacos, bowls, apps, or drinks, for a fantastic taste south of the border in the south end, head to Cosmica.