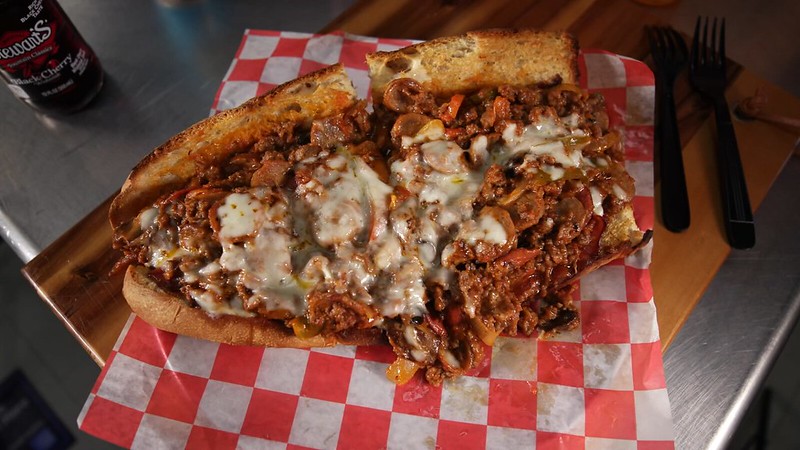 Every town has its local pizza and sub shops. But there’s a little spot in Metrowest that likes to get a bit crazy.

And as soon as you taste the overstuffed subs, outrageous pizzas, and everything else on the menu here, you’ll want to get a little crazy too.

Located at the junction of Routes 16 and 126 in Holliston, from the outside, The Corner Market looks pretty ordinary… Even the name is kind of plain, more fitting for a convenience store than a restaurant.

Billy Phillips: “Half the time people are coming in here, ‘You got butts?’ No, there’s no butts here.”

But what they do have here is just about every kind of food you crave.

Christine Schadler: “We’ve got everything from Italian style hand tossed pizza, burritos, tacos, paninis, a full Boar’s Head deli. We have crazy concoctions that we come up with out of thin air, and we can basically make just about anything you feel like eating. So if someone in your family wants a taco, and someone in your family wants a piece of pizza, and the third person would like an Italian sub, we’ve got you covered.”

The Corner Market menu is enormous, in fact, customers often don’t know where to start. But when in doubt, pizza is always a good choice. And while you can get a simple slice of cheese, or a great pepperoni pie, you should really try something more creative, like the Mr. Potato Head Pizza topped with mashed potatoes, bacon, scallions, and garlic.

Christine Schadler: “Tastes like potato skins except it’s coming to you on a pizza slice.”

For something even more out there, check out the weird but wonderful Crab Rangoon Pizza.

Billy Phillips: “You ever had a Crab Rangoon, you like Crab Rangoons, you’re gonna love this pizza. All right, we throw the Grande mozzarella down on the base. And then we scoop on the crab filling that we make here. And then we throw a little sweet chili sauce on the top of it. Put that into the oven. And then when it comes out, we throw wonton crispies on top. It’s almost indescribable because people come in like, ‘What does it taste like? How am I going?’ I’m like, only thing I can tell you is that it’s something that you need to try.”

Another one you need to try is the Pickle Pizza.

Billy Phillips: “Garlic aioli base, the Grande cheese, we throw the pickle chips on it, throw some bacon, and then it just all comes together in perfect harmony. And people love it.”

Christine Schadler: “The pickles we use are the Boar’s Head dill pickles, so they’re not super pickley. So it’s a lighter pickle flavor. And it tastes like pickles, and mozzarella, and garlic on bread.”

The Corner Market makes about forty kinds of sandwiches, subs, and panini, like the Uncle Junior, pressed with sopressata, prosciutto, fresh mozzarella, basil and peppadews.

Billy Phillips: “You know when you walk into an Italian deli and it has that smell to it. You know what I mean? That’s what that bite tastes like to me.”

But out of the dozens of different options here, one sub rules them all. The meaty, melty, massive masterpiece they call The Godfather.

Jason Schadler: “That’s about two and a half pounds. So we take the nice sirloin steak, we make it nice, we put it in there. It has sausage, peppers, onions, mushrooms, pepperoni, Grande mozzarella cheese and marinara sauce. We mix it all up, toast it on a sub roll with American and provolone cheese, as well as the mozzarella that’s in it, and it’s just giant. You need a fork.”

Christine Schadler: “We’ve had several customers tell us that they could eat more than one, so we’ve thrown the gauntlet and challenged them to do so, and you know, on the house, but nobody’s ever actually come back to do it.”

So there’s subs, and pizza, and then The Corner Market is also known for their Mexican food. Or more accurately…

Billy Phillips: “Our interpretation of Mexican food. Mexican is not a fair way to say it. What we say is we make American tacos. We are making anything into a taco.”

Christine Schadler: “What we learned along the way was if we infuse the shell with the Buffalo and then built the taco, it took it to this next next level.”

Jason Schadler: “I mean this is definitely not Weight Watchers.”

And as if the menu still isn’t big enough, the staff here is constantly coming up with daily specials, including an ever-changing Egg Roll, like the Pilgrim filled with turkey, cranberry sauce, and stuffing.

Billy Phillips: “I have some friends that say, ‘you jumped the shark, right? You put so much crazy stuff into it.’ But jumping sharks or riding that shark’s back. It doesn’t matter. Because if people want it and they buy it, then you did something right.”

And they’re certainly doing something right here. On Friday and Saturday nights, this place is so busy they only offer curbside pickup, because the entire restaurant is filled with staff trying to complete all the orders.

Christine Schadler: “We have 14 people on Friday nights, which is basically one person for every few square feet. So we just don’t have the capacity to have more human bodies within the store.”

And with just one visit, you too will see why so many people love The Corner Market.

Christine Schadler: “If you come to the Corner Market in Holliston, you’re coming to a place that is literally built on creativity and friendship. As corny as that sounds. That’s what this is. We’re here to have a good time. We are here to give our customers a good time and we want it to be funny and laugh. And that’s a huge part of it. We want to be the neighborhood restaurant, and that’s what we are here in Holliston.”