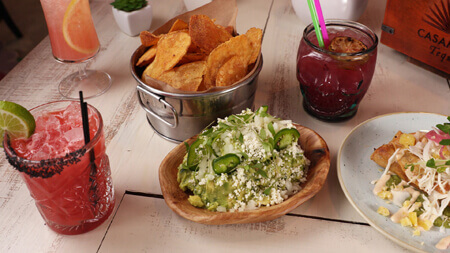 You can’t have guacamole without chips.

And who would want tacos without a great tortilla?

And you most certainly would’t want a margarita shaken up without some Citrus and Salt.

Located in Boston’s Back Bay, Citrus and Salt is the latest eatery from Boston’s blue haired king of creative cuisine, Jason Santos, who brought us big beautiful restaurants like Abby Lane and Buttermilk and Bourbon. In his latest installment, he decided to bring a taste from South of the border to the Bay State.

“I’ve been to Mexico many, many times. I’ve fallen in love with the food, I love the culture and I wanted to take a little part of Mexico and bring it back here to the Back Bay.”

So he decked out the space with bright vibrant colors, festive hanging lights and eye popping art.

“The vibe here is really upbeat and fun. People are having drinks, they’re sharing plates, a lot of energy, really loud, an super exciting.”

And just as tasteful as the decor, are the seriously tasty tapas lining the menu.

“The menu is very coastal-inspired. There’s a lot of fish on the menu, we have this amazing raw bar, and we have a lot of classics like street corn and flautas, and stuff. I wanted the food to be really…. shareable, and really fun.”

It’s all prepared out of an active open kitchen where Jason runs the show from behind the line.

“I think having an open kitchen, it’s like you’re the air traffic controller. You get to see everything that’s going on, you’re directing, you’re plating food, you’re talking to guests. It’s such a cool feeling to see the whole restaurant at full tilt.”

Any trip to Citrus and Salt should start with one of their creative cocktails which can come salted, smoking and topped with skulls.

“I think when you’re doing a Mexican concept, everybody thinks that you’re gonna have the obligatory margarita. But, not here at Citrus & Salt. We need to really make sure that our drinks stand out, that are really, really fun, and obviously delicious.”

To pair with that delicious beverage, you could start with ultra fresh ceviche, pan seared scallops with gooseberry salsa, or one of the most palate popping Mexican Street Corn north of the border.

“So, in Mexico, there’s street corn on every corner, and generally served with a little bit of lime and some cheese. Here we kick it up unbelievable. We toss the corn in Red Hot Cheetos, we roll it in cotija cheese, serve it with fresh lime. It’s bright red. Definitely a show stopper.”

Everything on the Citrus and Salt menu is shareable, including the Guacamole served wiht Jalapeno Kettle Chips.

“Every single Mexican restaurant, in every single city, in every single state, serves guacamole. So, I had to figure out a way, how can I serve this that’s a little bit different? We make an amazing fresh guacamole daily, but instead of serving them with tortilla chips, we serve them with a cheddar and jalapeno kettle chip.”

“The kettle chips are super cool, because they’re really, really crunchy. We make them in-house, a jalapeno cheese powder. You don’t even need the guacamole, just eat the chips.”

And then there are the Crispy Chicken Wings- coated in Jason’s signature white bbq sauce you can enjoy in house- or buy online.

“So, our wings are super cool. First, we smoke them. Then, we lightly fry them.  We toss them in amazing spice, some roasted green peppers on top and, of course, my white barbecue sauce, which you can find on chefjasonsantos.com,”

There are things you don’t normally see on most Mexican menus, like warm agave glazed cornmeal biscuits.

And steamed mussels served in an addictive chorizo based broth.

“I think the best part of our mussels in the broth. You could take those mussels, throw them over your shoulder, and just sop up the bread. That’s all the matters. “

And while most Mexican joints offer your typical pile up of nachos, Jason decided to serve chilaquiles.

“So, every Mexican restaurant does nachos, and I did not want to do nachos. So, I do my version, chilaquiles. Corn tortillas, topped in red salsa, tomatillo salsa, fresh jalapeno, onion and cilantro. It’s like a beautiful room temperature, crunchy, salty chips.”

And a variety of tacos like this one stuffed with ultra fresh beer battered cod.

“Everybody loves a good Baja fish taco so of course, we had to do our version. Crispy codfish, on a warm corn tortilla, shredded lettuce, a little bit of aioli and, of course, salsa on top. It’s crunchy, and it’s soft, and it’s warm and the freshest in the city.”

And since Chef Jason loves pork belly so much, he had to incorporate it into a taco as well.

“Pork belly tacos are one of my favorite things on the menu. I’ve never met a piece of pork belly that I have not loved. So, of course, we had to introduce that into a taco.”

Desserts are done differently at Citrus and Salt- because rather than run of the mill Mexican sweets, they offer a dessert by way of Disney.

“Dole whip is our version of the most famous thing, the most highly sold item in Disney World. It’s a pineapple sorbet that we make with a vanilla bean infused fresh pineapple, and you can absolutely add some rum to the top. It’s amazing. You don’t have to go to Disney World, but you come here to the Back Bay, and have a Dole whip.”

So save on the airfare and head to Citrus and Salt for a taste of Mexican and the Magic Kingdon, in the Back Bay.