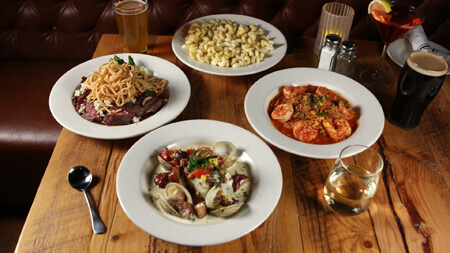 This is what happens when General Gao meets calamari.
“I’m not a General Gao guy.  But somehow with the calamari. It works.”
When BBQ meets nachos.
“The pork is is so tender. It’s just incredible.”
When burger meets pizza..
“It’s hamburger meets pizza and you can’t go wrong with either of those two.”
And when brick meets beam.
Located in Quincy, Brick and Beam ain’t your average eatery.  This  massive space is decked out with comfortable banquettes…..exposed brick….high ceilings and low lighting.  The restaurant provides options for any party whether you wanted to belly up to their busy bar or have a more intimate evening in one of their dining rooms. And the menu is just as diverse, offering items that go way beyond your typical tavern fare according to Executive Chef, Tom Coleman.
“We’re trying to do some of the those old flavors and that comfort food but a little more progressive in to today’s eating styles.”
The appetizers at Brick and Beam range from simple pretzel sticks paired with cheddar cheese or honey mustard for dipping…
To the over the top Pulled Pork Nachos…a dish that Partner Brett Kelly wasn’t quite sure of.
“I was a little skeptical at first when I first heard about it but the first time I tried I was blown away by it.
You’ve got the pork you’ve got the BBQ, the garlic jumping out at you. You know it’s just a you’re not really expecting that on the palate and then when when you do have your first bite it’s kind of a wow.”
The kitchen really gets creative with its calamari by serving it in the style of General Gao.
“So the general Gao’s calamari is kind of just it’s a it’s a sesame ginger based sauce in a traditional fried calamari that makes it somewhat untraditional. You have that that’s sweet. That spicy. And we’ve thrown you know, sweet corn and grape tomatoes and bacon and scallion in there to kind of make it our own thing.”
Other shareable ways to kick off your meal include The Cheeseburger Pizza which pairs two great tastes that taste great together.
“It’s like if you go to the fast food joint, and you get that those flavors you really crave the ground beef and the pickles and the red onion and the cheddar and mozzarella cheese. And then we top it off with with this shredded iceberg with Russian dressing. And…the special sauce and it’s it’s like taking a bite out of the best burger.”
If you’re JUST craving a burger, Brick and Beam has one of the best on the South Shore.
” It’s an eight ounce ground beef. Really, really nice meat, blue cheese bacon, an excellent brioche bun. You want to belly up to the bar and get a nice cold beer, the B&B’ burgers, way to go.”
The entrees at Brick and Beam are both original and approachable, like the Cod n Chowder, which is one of the chef’s favorites.
“I love it, because we have the opportunity to get really fresh cod. And it’s a one pan chowder that we make to order we pour over the top of this baked cod and the flavors are just it’s so so good.  You cut into the cod and it’s cooked perfectly and you get the flavors of the bacon and the lemon and the cream all together with the clams it’s it’s just out of this world.”
Other signature dishes chef loves to cook include Shrimp served in a zippy Creole sauce with corn, onions, peppers, and rice…
And a truly mouthwatering mac and cheese.
“His mac and cheese is incredible. Tom is kind of known for his mac and cheese. Wherever he’s gone. He’s kind of got a cult following for his mac and cheese.”
“For whatever reason people it’s crave for. The people come after it. And it’s a very simple cheese blend that I cannot divulge. But the cavatappi and that garlic and the heavy cream all comes together a little bit of panic, oh, crumbs on top, we bake it and it’s just it’s a simple but really great dish.”
But a tavern is only as good as its steak, and the B&B Steak is a crowd favorite.
“I think a tavern should have a really good steak. We’re using a shoulder tender…which is very, very tender marinate that that’s grilled and then sliced. We top it off with great hill blue cheese, some fried onions and it comes with mashed potatoes and asparagus as a little bit of Bordelais sauce on the plate kind of just accent the beef itself.
You have that crispy onion. The tanginess of the the great Hill blue cheese, the Bordelias sauce is kind of like a light steak sauce and it’s you get all those flavors together. It’s it’s something else.”
And save room for dessert, because chef creates everything from Bread Pudding with flavors that change daily….
To nostalgic fried dough bites.
“A little bit of powdered sugar, a little bit of cinnamon to finish it off. It’s like going to the fair. But they’re a little bites instead of the whole big piece of fried dough.
You know it’s great for sharing a great if you just want to eat it to your face.”
And with dishes this tasty, you’re going to want them all to yourself when you dine at Brick and Beam.
705 Adams Street
Quincy
MA
02169
617 481-5434
http://www.brickandbeam617.com