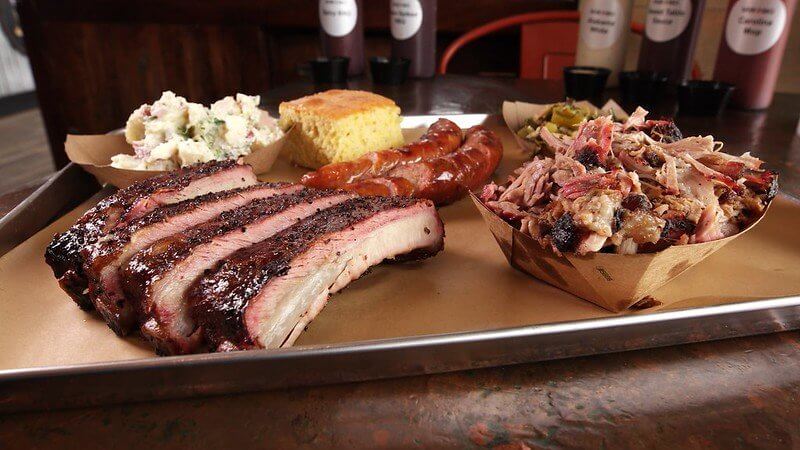 When it comes to BBQ, where there’s smoke, there’s fire.

“I think it’s the passion and the time. But once you get it, it’s to a next level. It’s an art really.”

Located in Plymouth, Bark BBQ is a festive spot where you’ll always find Chef Kurt Steinberg smoking meat low and slow in his Southern Pride Smoker, while his wife Janice works the room, bringing a bit of Southern hospitality to the South Shore.

“Bark Barbecue is a restaurant with our focus on barbecue.   I looked at barbecue shops in Central Texas, and the Carolinas, and saw their strengths and we incorporated into here. And really just focused on basics. But doing a really good job with it.”

An industry veteran, Kurt served long hours as Executive Chef to some of Boston’s finest hotels.  But when the pandemic hit and large conventions stopped, he made a pivot to pork, which opened his schedule for more family time.

“Hotels closed.  The food and beverage industry suffered the most and barbecue was like an at home passion and we decided to pull the plug out I really crazy time. And it was well worth it.”

“Well, it’s great. My wife hadn’t seen me for 30 years. So now she gets to spend every, every waking minute with me. I mean, who else doesn’t want to barbecue everyday for a job?  I’m used to being in the back of the house in the kitchen, and so my wife is out front and  she brings that energy.”

“Thanks for coming. Are you hungry?”

“Pulled pork sandwich and a cowboy caviar with pulled pork.”

“Where we have customers here that we see more than our family right now. Which is pretty great.”

“Right when you walk in everybody always says hi. I mean, we are on a lot of first name basis now with people which is awesome. And you start with current your order your meat and you work your way down the line, and then you end up with me. You pay and then you go seat. It’s awesome.”

There are many ways to kick off your meal at Bark.

You could throw back some of their crispy fried pickles, served with so called “sassy sauce”.  Or opt for their piping hot hush puppies served with spicy honey.

“They’re like a little sweet savory, little munchkin we call them with cornmeal and onion and then Kurt makes a homemade spicy honey that you dunk them in. You can honestly on your own but once you dunk them into that sauce, it’s just the savory and sweetness of them. Everybody loves them.”

But every table should try Bark’s Jerk Wings.   Made with a coveted Jerk Sauce, the Steinbergs stumbled on while visiting Jamaica.

“So I’ve always liked jerk. And we have been on vacation in Jamaica. And there was a jerk hut that we would frequent. And I tried the entire week to get the recipe from the chef there. And finally,  with some money, he had to write it down on a napkin for me. And he gave it to me This was the Bark Barbecue Jerk sauce recipe. Straight from Montego Bay, Jamaica. We do it on the wings and we do it on the whole chickens. It caramelize is up the skin nice when we smoke it. It brings on a combination of the smoky flavor from the wood and the jerk spice. It is just gives you that kind of Caribbean feel that that that? You know I remember from being in Jamaica.”

“I love because I love the heat in it. And I love to stay the flavor is amazing.”

Another app that will leave your mouth in amazement are Bark’s Burnt Ends, but you got to get there early because once they tend to sell out.

“So many people come in and say I’m going to get the burnt ends what are they?  They literally the burnt end of the brisket which people don’t realize is only two ends of a brisket and we do cut them fresh off of the brisket. They just are delicious.”

I don’t make burnt ends.  The brisket makes the burnt end. So when I do a brisket. I pull off one burnt end off of it. And then I cut them up. And that’s it. So that’s why we sell out of burnt ends.”

“They melt in your mouth. We run out of them sell out of them as we say pretty often. You gotta get them while you can.”

From there, it’s all about the meat. Whether you go for their juicy pulled pork, spicy hot links or perfectly executed St Louis style ribs.

“You have a nice crunch when you first bite into it. You bite into it and there’s a a nice tear from it.  They’re only dry rubbed and smoked. No sauce on them. You don’t really even need sauce. The meat so tender and juicy, they’re delicious.”

But it’s the brisket that brings people to Bark.

“We start with the best brisket that we can get  and a nice simple rub on it I use oak I smoke it for 12-13 hours.Take it out. Let us set. Just fat, salt, meat, everything, everything good in life.”

And what would BBQ be without sides, and here they make it all in house.  From Potato Salad and Cole Slaw.  To Collard Greens and for a taste of New England with your southern bbq, Boston Baked Beans.   But there’s nothing more indulgent than Bark’s Mac and Cheese.

“Our mac and cheese to me it’s a delicious creamy based mac and cheese it’s homemade. We did do not do a crumb on it. We use a lot of the white cheeses. It’s a little bit different than what people anticipate in barbecue. We use a shell. But once you get a taste of it, you’re gonna love it.”

If you truly love the Mac and Cheese, you can order it as a bowl topped with Nashville Hot Fried Chicken.

“I love a Hot fried chicken because it’s hot, but it’s because good flavor to it. And then with the with the macaroni and cheese. It just goes great together.”

If you’re looking for something in sandwich form, you can try this beauty piled high

“That’s probably one of our staple top sandwiches that we sell. Kurt makes homemade flour mixture that we used to make the bark fried chicken. It’s fried fresh every day comes lettuce pickle and our sassy sauce on potato roll.

It’s delicious. It has a little bit of spice but not a lot. It’s the chickens brine so you get that nice juiciness of the chicken. It’s amazing.”

And for this couple,  what started in a global pandemic, has turned into a local bbq sensation at Bark.

“It’s a dream come true. And I’ve learned a lot more about Kurt than I ever thought I didn’t know about him. And he’s extremely talented. And I couldn’t be more proud.”