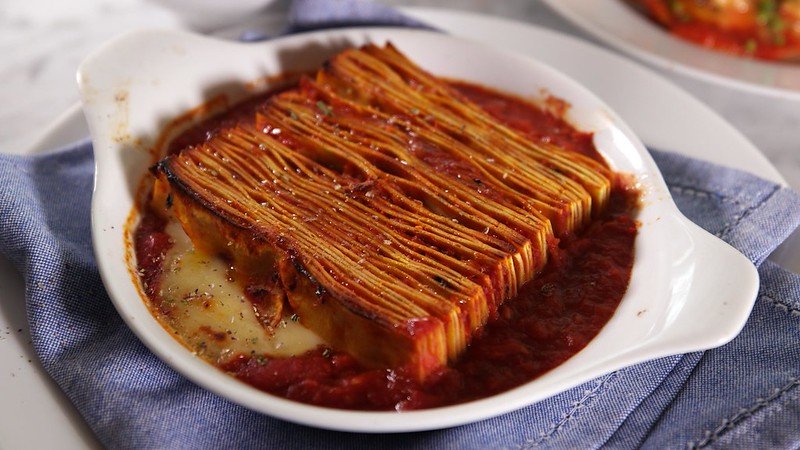 A trio of cheeses and 100 layer lasagnas.

For a taste of Italy right in Harvard Square, you’ve got to get yourself to Bar Enza.

Located inside the Charles Hotel, Bar Enza is a sultry, sophisticated space where Michelin star chef, Mark Ladner brings his take on a Neo-Trattoria back to the Bay State. Originally from Belmont, Chef Ladner has spent most of his career working at some of the top restaurants in New York City, but he’s back for one delicious homecoming.

“After 30 years in Manhattan, I wanted to come home and be closer to my family and I’ve always admired the food scene in Boston. I have been friendly with a lot of local chefs and have been for for many years. So yeah, it’s good to be home.”

So he and his team created a menu with a little something for everyone- whether you’re an adventurous eater, or just want one of your favorite Italian comfort foods.   And when it comes to the space, Bar Enza offers many options as well.

“It’s sophisticated, but it’s not. It’s not stuffy. We have a tarazzo floor and lots of plush velvet banquettes and multiple dining rooms that have different sort of vibes. We’re able to accommodate lots of different needs.”

So Phantom grabbed himself a cocktail, and got out a fork in search of the PERFECT MEAL.

There are many light bites to kick off your meal. From beautiful prosciutto, sliced paper thin and served with housemade toasted focaccia and shaved pineapple.

Or a trio of fine pecorino cheeses paired with an apple mostarda. But every table must order the eye popping ciabatta sticks.  This towering pair of crunchy breadsticks measure almost a foot tall and come with a zesty mascarpone cheese flavored with Sorrento lemon and lava salt.

“It’s really crisp on the outside and..there’s a lot of air sort of gaps in the center, so they’re not very heavy. And then with the mascarpone, which is really creamy and kind of cool. It’s hot and cold sort of juxtaposition. I like it.”

Other ways to kick off your meal include a selection of salads like this one with earthy mushrooms, roasted shiitakes, broccoli rabe, and warm robiolina cheese in soy balsamic. Or this dish showcasing imported Italian artichokes and chopped celery in a lentil dressing. But for a uniquely delicious dish, there’s nothing better than the tuna cubetti.

“The tuna is really good. It’s local yellowfin. It’s light. It’s refreshing. It’s vibrant.  There’s this sauce on the bottom, that’s called salsa guasacaca, that smoothed out with avocado and then the tuna cubes are dressed just with some seasoning and lemon and olive oil. And then there’s some fried onions on top and a lot of different herbs.The tuna cuberti is something you should definitely try when you come to bar Enza. “

Since this is an Italian spot, a plate of pasta is a must. There’s garlicky Shrimp Scampi featuring jumbo wild shrimp over linguini and something called the “Angry” Lobster Ravioli, named for the fiery arrabbiata sauce it’s served in. But the true show stopper at the restaurant is their famed 100 Layer Lasagna. This tower of tasty is stacked with flavor.

“We cook all the components separately.  We build it with very light layers of sauce between the layers of pasta. And then we refrigerate it overnight and then cut it while it’s cold. So it’s like a compressed block. And then it’s big to order and lots of cheese and tomato and it’s sort of becomes really gooey and crusty on top.

Entrees at Bar Enza run the gamut. From the Shake and Bake Hake served over broccoli sauce to this perfectly executed Pork Alla Milanese, served with a truffled radicchio salad and a smoked cinnamon dusted pork rib. But the ultimate entree at Enza has to be their Meatball Gigante.  This massive globe of goodness truly lives up to its name- both in size and flavor, with a little help from one of Mark’s chef friends.

“It has beef, pork and veal as well as sweet and spicy pork sausage and then we buy barbecue from a good friend of mine Andy Husbands that has a barbecue place locally called the Smoke Shop and fold it into the meatball as well. So it’s all these different expressions of beef and pork and veal.  The tomato sauce is quite smoky because of the barbecue,  which is nice.

And when dessert rolls around, you could opt for the subtly sweet Affogato or the flourless chocolate torte- smothered in creme fraiche and sprinkled with pink peppercorn.

“It’s quite chocolatey. It’s almost like a ganache. It kind of looks like the candy cane cake from Starbucks, but I think it tastes better.”