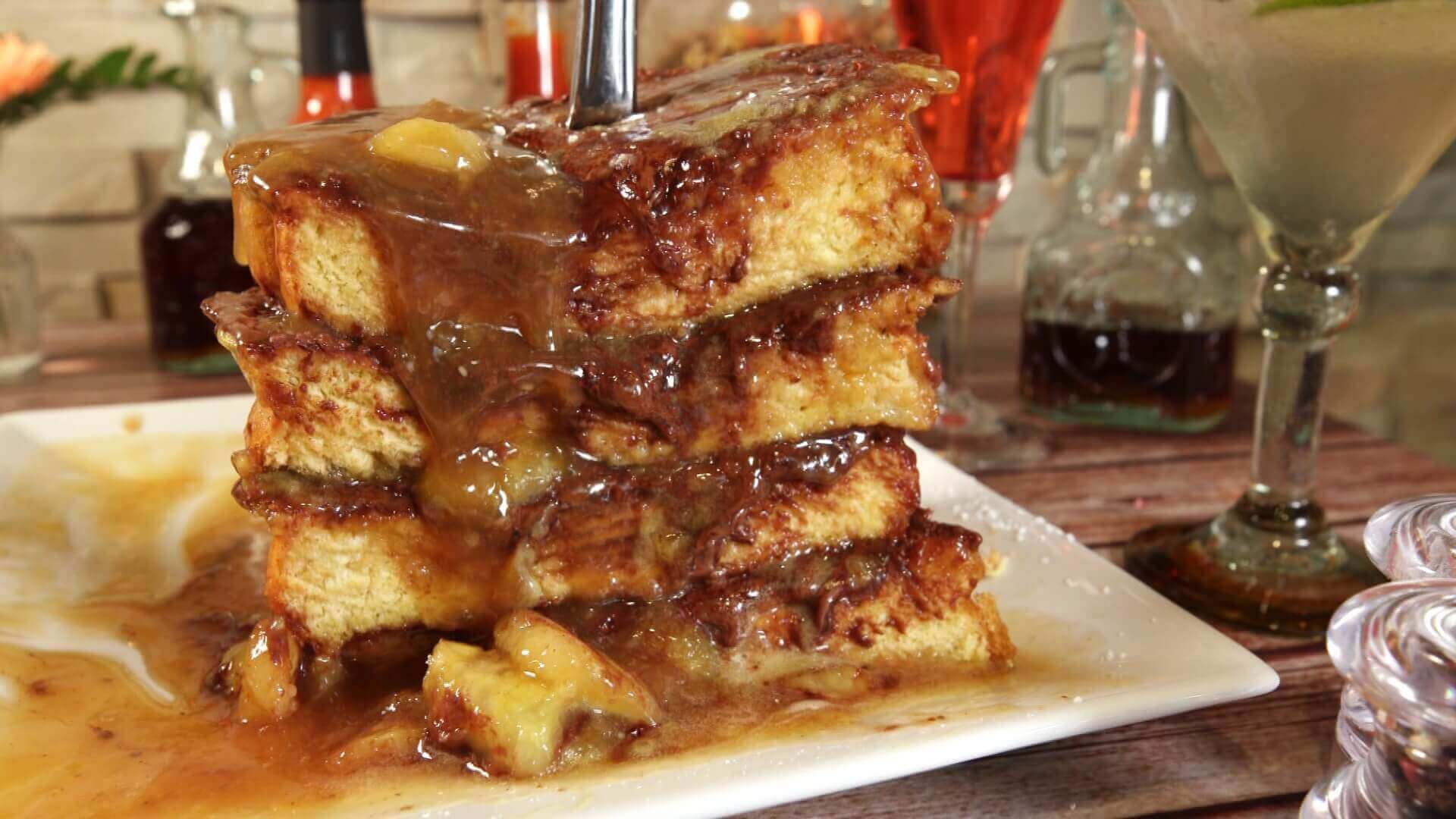 How you do like your brunch? Sweet… Savory… Boozy… Bountiful?

Well you can get it every way you want, when you take a seat at Yaz’s Table.

Located along busy Route 18 in Abington, Yaz’s Table is giving the morning meal a delicious upgrade Because while other restaurants take brunch and jazz it up, at Yaz’s Table…

This cute fifty seat spot is the creation of owner Yasmine Zakhary, who learned the business working in some of the Boston area’s best restaurants. So when it came time to open her own place, she knew exactly what kind of spot she wanted it to be.

And the food on Yaz’s Table is awesome, offering brunch all day, featuring new American favorites with a Mediterranean flair.

Yasmine Zakhary – Owner, Yaz’s Table: “It’s farm fresh. You get real good food, we make everything from scratch. Everything that we do just really has a nice fun twist to it.”

If you’re looking to start the day with something indulgent, Yaz has you covered, with dishes like thick cut Nutella Stuffed Banana Foster French Toast, and a Birthday Cake Waffle, piled high with whipped cream and sweet memories.

Yasmine Zakhary – Owner, Yaz’s Table: “Since I was five years old, my mother would always make me a birthday cake waffle. And that would consist of Fruity Pebbles loaded up with cinnamon whipped cream, more Fruity Pebbles to me as a kid it always looked like it was a mile high. And that’s something I really want to bring on to my menu so everyone on their birthday or regular day they can have their birthday cake waffle.”

And any day is a good day to try this creative dish, Yaz’s Mini Pancake Tacos.

Yasmine Zakhary – Owner, Yaz’s Table: “You’ll have to try the Mini Pancake Tacos. Those are so much fun. We’ll do a nice little spread of Nutella, fill it with fresh fruit, and then put it in the taco tin with house whipped cream on top.”

As you might imagine, this new take on tacos gets quite a reaction from customers.

Yasmine Zakhary – Owner, Yaz’s Table: “They’re like, That’s ridiculous. And who would have thought what a great idea. You know, eating pancakes with your hands having it into a taco form.”

But of all the sweet treats on the menu, you absolutely must order the House Made Donut Holes.

The ever-changing options include everything from Cinnamon Toast Crunch, to Toasted Coconut and Chocolate Ganache, to Oreo Cookie.

If your tastes tend toward the savory side, Yaz’s Table has lots of awesome options, like Chicken and Waffles with Sriracha Maple Glazed Bacon and Honey Sriracha Maple Syrup, Breakfast Tacos with scrambled eggs, cheddar, and pico de gallo, and a Breakfast Burger topped with bacon, crispy potato hash, and a sunny side egg.

Customers who come in with a king sized appetite should order this big bowl of hearty deliciousness known as The Sultan.

Yasmine Zakhary – Owner, Yaz’s Table: “The Sultan means the king in Egypt, and with that, it literally is the king of the menu. We’ve got our sweet potato and two golden potato home fries, two slices of extra thick sriracha Maple glazed bacon, and then our slow braised short rib that we slowly braise overnight, and then finished with our poached farm egg, and crispy fried leeks. You can’t forget the crispy fried leeks.”

And if you want a little spice on your Sultan, try Yaz’s homemade hot sauce, made exclusively by Yaz herself.

Yasmine Zakhary – Owner, Yaz’s Table: “It’s got eight different types of ingredients in it. And of course I can’t tell you because it’s a secret. But no one in the kitchen has the recipe except for myself. It goes great literally on everything.”

Yaz’s Table has only been open a couple years, but the dining room is always packed with customers, who appreciate all the small touches here; like fresh flowers on the tables, cute Mason Jar glasses, and lots of handmade Egyptian decor, reflecting Yaz’s heritage.

Yasmine Zakhary – Owner, Yaz’s Table: “I’m Egyptian and my whole family’s Egyptian, and it’s just been so great to be able to introduce that here at Yaz’s Table.”

There’s also authentic Egyptian eats on the menu, like a hummus trio with plenty of pita, and an enormous Falafel Platter, all courtesy of Yaz’s mom Maggie.

Yasmine Zakhary – Owner, Yaz’s Table: “She literally comes in and she’ll prepare these dishes herself. Most of the recipes aren’t given to my staff in the kitchen, my mom would come in and she would do it herself.”

Maggie Zakhary – Owner, Yaz’s Table: “Anybody can make it but it’s not going to come out like mine.  They try to make the stuff, but nothing comes out, it tastes like mine. My daughter always tells me, ‘It does not taste like Mom’s.'”

And while momma handles the family recipes, Yaz comes up with the cocktails, which are colorful, creative, and sometimes extra caffeinated, like the Espresso Bomb Martini.

Yasmine Zakhary – Owner, Yaz’s Table: “We take an ice sphere, with pure espresso, and then we freeze it, and then we put it right into a martini glass and tableside we’ll pour the rest of the martini into your glass. And what’s great about that is that as you’re drinking it, the espresso bomb starts to melt and release more espresso into your drink. And as it takes time to drink it, you then get a nice little buzz from most of the espresso that you end up with.”

And once you experience a meal here, you’ll be buzzing about Yaz’s Table.

Yasmine Zakhary – Owner, Yaz’s Table: “I just really want the guests to have an overall wonderful experience. We’re not just feeding their bellies, but really our concept is we want to feed your soul. And I feel like we really do execute that well here at Yaz’s Table.”