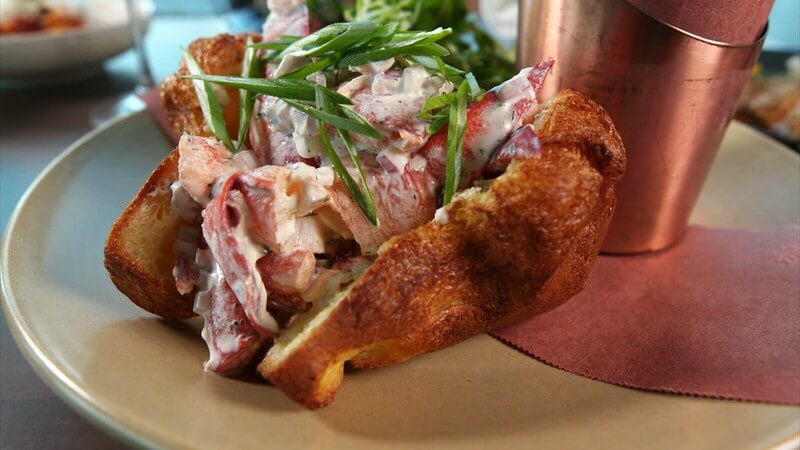 A sleek modern restaurant on the former site of a beloved Boston mainstay.

“We opened up right here on Boston Harbor in the spot of where Anthony’s Pier 4 used to be.”

“We have a 260 acre farm in Bath, New Hampshire. So the restaurants are the table for the farm.”

Located on Boston’s waterfront, Woods Hill Pier Four is a big, elegant space with floor to ceiling windows, giving diners panoramic views that are as pleasing as the fare being prepared.

“We have 180 degree views of the harbor”And so we have a beautiful view of the city and it just feels like you’re right on the water.

I wanted it to look more like Miami- just a little more modern and so I have blue lighting in here and and blue accessories and I just thought that it would you know play off the water and not distract from the view.”

That’s Kristin Canty, owner of Woods Hill, who along with Executive Chef Charlie Foster serves farm fresh food they mostly raise themselves out of her farm in Bath, New Hampshire.

The space itself is iconic, as it is set in the same spot as the legendary Anthony’s Pier Four.

And while they kept some of the memorabilia, they’ve certainly updated the space and even added igloos for the cold weather.

“People don’t really want to eat inside at this moment. So we have a nice bubble for people to go in and sit with either their own families  and be in their own pod.

If you happen to be in the area on the weekend, brunch at Woods Hill is a must, because that’s when their burger is offered.

“So it’s like a 70/30 blend. We’re also serving in a double stack, so it’s two four ounce patties that we’re grilling and really high heat and getting there’s a lot of crispy edges as opposed to just sort of like a big meatball.

It’s all inspired by a west coast mainstay.

“My favorite fast food burger on earth is the ‘In and Out Burger’. I have a couple brothers that live in California. And the last time I visited I literally ate there every day.  And I was really going for an ‘animal style 2 by 2’.  But, I’m doing it using a sourdough sesame wholewheat bun and you know making everything in house and showcasing grass fed meat.”

And to pay tribute to Anthony’s, they offer a Lobster Popover.

“Obviously the popover was a big part of the experience. They go around and hand them out. Freshly baked pop overs to the guests.

So we’re shucking and cooking fresh lobsters that are obviously a local staple of New England, and very simply just warming up the popover putting lots of salad inside and it’s basically our version of a lobster roll with an homage to Anthony’s Pier Four.”

During the week, there are elegant offerings like the local seabass crudo served with charred fennel and citrus. And creative plates like Sunflower Risotto, where chef slowly cooks sunflower seeds and adds artichokes, pickled sweet potatoes and oyster mushrooms.  And for something a bit more traditional, try the Bucatini All Amatriciana made with guanciale raised on the farm.

“Bucatini All Amatriciana is all about the guanciale as well as the quality the pasta. And so we make our own pasta using organic semolina, and  we raised the pig, and actually create that entire dish. So it has a very special place for us because  you can’t get that exact dish anywhere else.”

“We raised the ducks ourselves and we age them for two weeks It gives you a really crisp almost Peking duck style skin. And then on top of that the meat you’ve really gotten a deep, meaty flavor. It’s just a way of really showcasing how good that meat and how special it is.”

At dessert, you may want to get a plate of warm beignets with apple butter to share, but these are golden fried delights are so great, you may just want to keep them all for yourself.

“I mean, we’re not the first person to make beignets. They’re delicious for a reason. And you know, it’s hot fried dough, what can go wrong?”

And whether you’re there on the weekend or weekday. Dining inside or out. For food, views and more, you’ve got to try Woods Hill Pier Four.