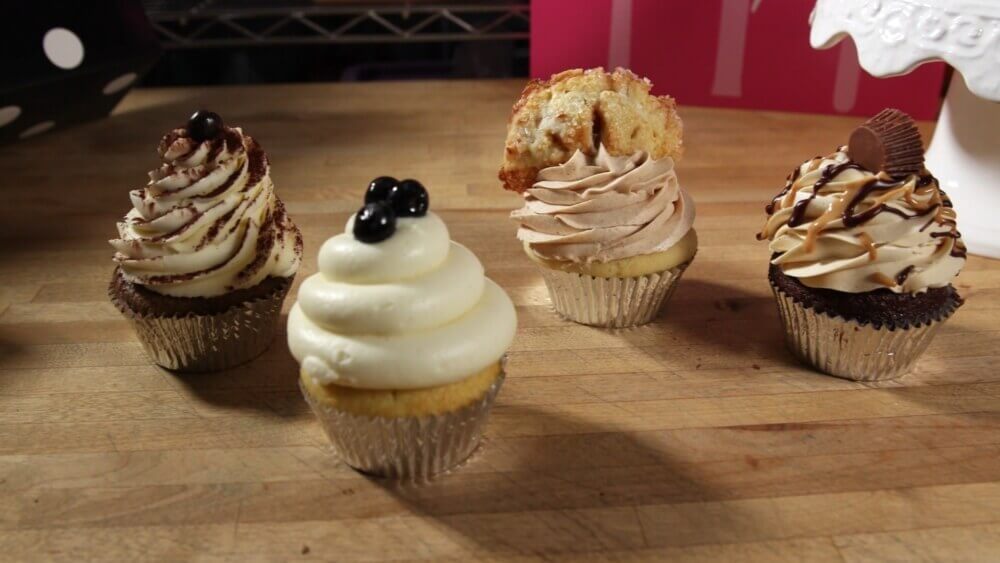 Whoopie-Doo & Cupcakes, Too! is a scratch bakery in Sturbridge, Massachusetts.

This is chocolate buttercream.

This is French macrons.

We have everything from cupcakes, whoopie pies, cinnamon rolls, cookies, French macrons, all made from scratch here in our bakery.

My first career was a nurse, and I was nurse for 20 years. Always loved baking, had done a lot of baking at home. And after 20 years of nursing, decided to start a bakery out of my house doing cupcakes and whoopie pies. And it just took off, so then we converted our two-car garage to a commercial bakery, and then we outgrew that and decided to build it out, retail here in Sturbridge.

I think making everything from scratch is the only way to do it.

I’m crimping the edges to kind of seal that filling inside the pie crust.

Because we use quality ingredients.

This is sifting the powdered sugar and the almond flour for the French macaroons.

I mean, I think scratch baking is the best flavor. It’s the best way to do it.

Our cupcakes are the best cupcakes you’ll ever taste. They’re super moist and made with really fine ingredients.

One of our most popular cupcakes is our Death by Chocolate cupcake.

Our Apple Pie cupcake starts out with a vanilla bean cupcake, and then we core and fill it with our homemade apple pie filling, and we top it with a cinnamon buttercream, and then we make a homemade apple hand pie for the top as a garnish. We cut our circles and I’m taking a little scoop of our homemade apple pie filling, putting it in the center. And then we just make like a little half-moon hand pie here. And then we’ll bake them up and they will go on top of our Apple Pie cupcake, so you’re getting a cupcake and a little pie. People love having two desserts in one.

We have giant cinnamon rolls that we make here.

I made the dough early this morning. We roll them out and then you smother them in butter, cinnamon, sugar. Your roll them, cut them up, proof them, and then they get baked.

And then we frost them with an iced cream cheese icing.

Those are a meal in and of themselves. They’re amazing.

We also make French macarons here. French macrons are made with almond flour and meringue. It yields a small cookie sandwich and it has a nice light shell to it and a soft chewy inside. They’re fun. They can be customized to any flavor, any colors. They’re really beautiful and so delicious.

The staff here at Whoopie-Doo, to me, is more like family than they are staff. And I always say that customers are my top priority, but my staff is right there with them because I couldn’t do all of this without them. They’re just great people and they have passion for what we do here just like I do. It’s great to share that with the team that you have around you.

I want my customers to experience delicious cupcakes, whoopie pies, anything that they try to be just the best that they’ve ever had, and I want them to feel like they’ve just walked into this happy, happy place. This is my passion. I’m living my dream. It was my dream to have a bakery. Not many people get to live their dream, and I feel very, very blessed that I got to.