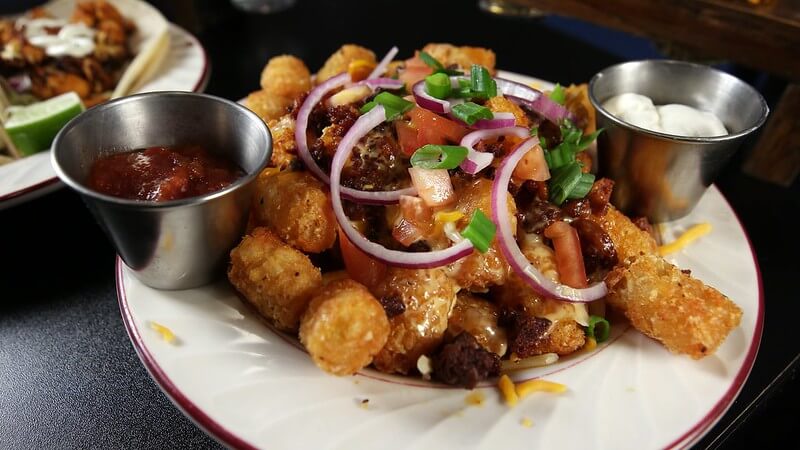 All of your favorite comfort foods.

And an atmosphere unlike any other restaurant.

Located in Nashua, New Hampshire, The Flight Center is a unique space inspired by owner Seth Simonian’s passion for planes.

“So the Flight Center was built out of me being a rated commercial pilot went to college to be a pilot.  So my grandfather was a pilot in World War Two and I spent a tremendous amount of time with him as a kid.  It was just the fascination with being up in the sky and free and open, and not having to really live life down on the ground as everybody else was. It’s a very awesome experience when you’re up there.”

And when he built this space, he really went full throttle with the theme.

“We wanted our guests to have an experience as though they were walking through an airport.  You’re first going to see a massive 80 foot long image that makes it look like you’re overlooking a runway.  And then in the very front of the restaurant, have a lounge. And then we have your traditional bar top.  So attached to The Flight Center, you’re also going to find a bottle shop traditional beer shop.  We want to give people an opportunity to sample what we have on tap before they purchase it.  They have the opportunity to build their own six pack everything on our bottle shop is broken into singles.”

There’s only one way to begin your meal here and that’s with a flight of beer and a bowl of bacon.

“It’s a thick cut applewood smoked bacon. You get six strips of bacon that are baked candied and then glazed with a maple glaze you can Cajun it by adding Cajun seasoning to it. So you’re either getting a pretty sweet flavor with a very crispy bacon or you’re getting a much more hot spicy experience.?”

After that, there are options like Cauliflower Tacos presented on corn tortillas with a housemade lime slaw. Or Crispy Fried Pickles. And to pair with your flight of beers, you can also get a flight of wings.

“So we do our wings two ways. You can get our wings as one flavor, or you can do three different flavors in a flight of nine wings.  It gives you an opportunity to have a little bit of everything to try the flavor profile across the board.They’re beer braised for a specific amount of time. They’re baked off and then they’re fried so the juiciness of the chicken is maintained within the wing and then you’re getting that crisp outer flavoring that a lot of people dig on the wings.”

Another staple of any great beer hall is a great pretzel.

“Pretzels and beer have gone together forever. So our beer pretzels are unique. We cut them up into shareable bites, and it’s served with our housemade beer cheese, which is a brown ale cheese sauce, as well as a house made beer mustard. So you’re getting a lot of different flavors built into the cheese and the mustard that you traditionally wouldn’t get.”

Other apps include traditional Nachos loaded up with all the good stuff.

And a starchy spin on nachos made with tater tots, appropriately named Totchos.

“Who doesn’t love tots right? Tots make everything better. So you’re not only getting your your crispy flavor of a tater tot but you’re also getting all of that impact of the Nacho whether it’s the cheese or the chorizo or the spice coming out of everything else. It makes you ask for more.”

For your in-flight meal, you could opt for Brats served with beer braised onions and tots.  Or light up your palate with some Nashville Hot Chicken.

“We kind of kicked it up a little bit of a notch to give you a burst of spiciness and flavor where it’s lightly tossed in buffalo sauce, and then it’s peppered with Cajun seasoning, served over two of our house made biscuits. Along with some pickles on the side, It’s one of those dishes that once you have it you’re going to come back and watch it again.”

And for something hearty, try the Beer and Beef Dinner.

“It is our house made meatloaf made with a beer based gravy served with rice and a seasonal veg. It is something that you know when you think of homestyle cooking and what you might have at mom’s dinner table was that great meatloaf that always had a fantastic flavor, a good punch to it and it was always filling. So it’s it’s one of those meals that you can sit down have a hearty meal have a couple of big beers with it. And it pairs well with so many different things. “

And as your meal is coming in for a landing, there’s nothing quite like the Flight Center\s Churros- served with a Bacon Butter Cream Frosting.

“They taste amazing. So you bite into it, you’re getting that cinnamon crunch that just brings you back to being a kid eating one for the first time. And who doesn’t love bacon, you’re getting all of that bacon flavoring as it goes through it as well.”

And with affordable prices, rotating pints, and first class food, you won’t mind your departure being delayed at The Flight Center.