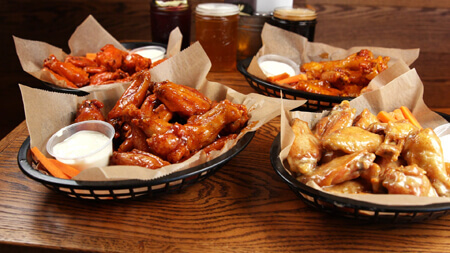 Why have plain old Buffalo Wings when you can have Loaded Wings?

Why settle for Waffle Fries when you can eat Waffle Fry Cheeseburger Nachos?

And if you want some slow smoked ribs and brisket, why not have some of the best around?

If the only cure for your Snack Attack are over the top eats like these, then you need to fly straight to The Coop.

Located in Millbury Mass, The Coop is a cute little counter service spot where diets go to die.  Because here, the sauces never stop, the plates are piled high, and if a little is good, a lot is even better.

Angelo Tsetsos opened The Coop a couple years ago, because he wanted to serve the foods customers crave.

Back in the kitchen, Chef Mike Wells is in charge of cooking up this dizzying array of deliciousness, in all its deep fried, cheese covered, sauce smothered glory.

Michael Wells – Chef, The Coop: “This is this is homey food. This is food that makes you feel at home.”

And folks certainly do feel at home inside The Coop.  The twenty-seat dining room actually looks kind of like a chicken coop, decorated with lots of wood and chicken wire, plus quirky pictures, and a huge chalk art mural of Godzilla-like chicken taking over a town.

Michael Wells – Chef, The Coop: “As soon as you walk through the door, you hear music playing, you see people smiling, you see people joking, people just sitting down enjoying the food. They don’t have a napkin on their laps, their digging in, they’re getting dirty, they got barbecue sauce on their face. It’s just good down home food.”

When it comes to food at The Coop, of course wings are their thing, served on the bone, or boneless, with about two dozen different sauces, from classic Buffalo, to Dijon Honey Mustard, to Sweet Chili Glaze, to Angelo’s favorite; Fiery Honey Jerk.

Simply tossed in sauce, the wings here are definitely delicious, but if you want to take your wing game to the next level, the Loaded Wings are the way to go.

Angelo Tsetsos – Owner, The Coop: “So we’ll take either your bone in wings or your boneless wings and we’ll put toppings on them.  And you know we can get pretty crazy with some of these toppings.  One of them is called the BBQ Tips, you get your wings, and we put pulled pork and beef brisket on top. So it’s like meat on top of meat. It’s really good.”

For some Asian flavor, check out the loaded Thai Peanut wing, tossed in a hoisin-peanut sauce, and topped with roasted peanuts and scallions.  If you’re looking for more golden fried goodness than any person should probably eat, order the Fry Daddy, featuring breaded tenders, fried pickles, and fried jalapeños.  And for what might be the ultimate cure for a snack attack, look no further than the Chips and Dip wings, with bacon, potato chips, sour cream and chives.

Angelo Tsetsos – Owner, The Coop: “Just like if you’re at home and you’ve got potato chips with some sour cream and chives, we’ve taken that we’ve just incorporated on top of the wing.  So not only are you get your potato chips, now you’re getting the wings that are on top of it, it’s just amazing.”

Appetizers at The Coop are more like meals.  Especially the mountainous Waffle Fry Cheeseburger Nachos.

Angelo Tsetsos – Owner, The Coop: “Those are huge.  People order that and they’re probably thinking we shouldn’t order dinner.  Get your waffle fries, chop up one of our burgers, put that all on top.  We layer that with cheddar cheese, when it comes out lettuce, tomatoes, diced pickles, onions, and then we throw a little ketchup and mayonnaise on top.  It tastes like taking a burger with all the condiments on top of your fries. It’s awesome.”

If you’re in the mood for an actual burger, there’s the Triple B, a juicy beef patty stacked with brisket, bacon, and barbecue sauce, or the gloriously gluttonous Guinness Poutine Burger.

Angelo Tsetsos – Owner, The Coop: “We take one of our burgers, grill up some onions, gets a sunny side egg and waffle fries.  That’s all on a sandwich, that egg just breaks over everything and people don’t know whether to take a fork and knife, I just think they got to just get in there and dig in.”

Barbecue is another big reason people flock to The Coop, because this stuff is the real deal, cooked low and slow in a smoker filled with cherry and hickory woods.

All the meats coming out of the smoker are pretty much perfect.  Like the St. Louis Ribs, lacquered with sauce, the impossibly juicy Brisket that’s sliced thick and served with creamy homemade mac and cheese, and the Pulled Pork, that Chef Mike always shreds by hand.

And whether you’re here for the authentic barbecue, the outrageous Loaded Wings, or everything else on the menu at The Coop, chances are you’re gonna leave with a full belly and a big smile.

Angelo Tsetsos – Owner, The Coop: “I want people to enjoy their food.  I love seeing people sitting down just enjoying their food and just having a good time, you know.  That’s what it’s all about here.”