The Birch on Elm 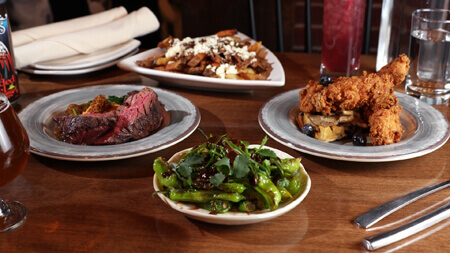 Take a look around this restaurant.  Check out the food, the funky decor, and the craft cocktails.  It seems like some kind of trendy spot straight out of Brooklyn, or Austin, or certainly at least Boston. But it’s not.  This is The Birch on Elm in Manchester, New Hamsphire.
Serving locally sourced, creative small plates, along with some serious drinks, The Birch on Elm is a true passion project for Executive Chef Nick Provencher and General Manager Joel Soucy.
Joel Soucy – General Manager, Birch on Elm: “Birch on Elm is sort of this funky little fever dream cross between a cocktail bar and a global tapas restaurant. I think it’s one of the first really modern urban restaurants to come to Manchester, New Hampshire.”
Nick Provencher – Executive Chef / Co-Owner:
“I’d say it’s best described as globally-influenced tapas in terms of the menu for food, kind of a more modern concept of a restaurant that we have brought to a town that we felt was kind of lacking any movement in the culinary and drink scene.
Joel Soucy – General Manager, Birch on Elm: “People want to be adventurous eaters, but they don’t want to eat something they won’t enjoy.  We get the ‘oh wow!’, the ‘holy cow’ when the food actually hits the table. We see customers talking to each other about what did you get, what did you get?  This is so good, this is so good. So it’s a really cool experience to have that interactive crowd.”
The menu at Birch on Elm changes every 6 to 8 weeks, and it’s always full of boundary-pushing surprises.  There’s Asian, French, and Italian influences. And yet, the atmosphere fall somewhere between a New England hunting lodge, and a traditional English gentleman’s club.
Joel Soucy – General Manager, Birch on Elm: “You’ve got snow shoes on the wall, the antique fishing polls on the wall, the 1928 Littleton canoe on th wall, the exposed brick, the exposed beams, all the soft colors and tones. We also have a lot of hard wood, a lot of soft leather couches, hardwood tables, hardwood bar top. We want it to be a New Hampshire restaurant.”
But the truth is, New Hampshire has never really seen dishes like these.  There’s the seared avocado with toasted pumpkin seeds and pomegranate.  Tempura fried housemade pickles. Blistered shishito peppers. And one of the best plates of poutine you’ll ever taste, even though it’s far from the French-Canadian tradition.
Nick Provencher – Executive Chef / Co-Owner: “Poutine is something everyone has everywhere but we wanted to do something different and that kind of took a Greek take on it. Did hand punched homemade fries, but then we did it with lamb. And feta cheese instead of your traditional cheese curd and gravy. We made the gravy with the braising liquid from the lamb. I think they’re insane. It’s one of those things we definitely sell a ton of them. It’s one of those things we try to get people out of their comfort zone but at the same time, give them something relatable that they are comfortable with too.”
And speaking of fried morsels that may be a bit out of your comfort zone, behold the shockingly delicious Octopus Nuggets that are slow-braised, tempura fried, and completely addictive.
Joel Soucy – General Manager, Birch on Elm: “They actually have the consistency of scallops, they look like fried scallops, so don’t be too afraid to order octopus. It’s really approachable, it’s super delicious.  Even the most avid picky eaters love this dish.”
If you don’t want to order something quite so bold, there are standards like blue corn crusted fish tacos.  Marinated hanger steak sweet potato custard. Pan-fried dumplings with local mushrooms and kimchee.  And a whole new spin on Southern-style chicken and waffles.
Nick Provencher – Executive Chef / Co-Owner: “We get our chicken from Vernon Family Farm. So we take our homemade waffle recipe that we were using for brunch, added some blueberries to them. Then took local maple syrup and slowly poached sage in it for a few hours to have it pick up that sage flavor.”
Joel Soucy – General Manager, Birch on Elm: “That waffle is just so crispy on the outside but so soft on the inside. And then you get this really rich and slightly floral from the sage syrup on the top of it. So you get a lot of different textures, you get a lot of different flavors, super dope comfort food.”
But out of everything on the menu, the number one choice for both Joel and Chef Nick, is the Vietnamese banh mi sliders served on a housemade Chinese style steamed buns.
Joel Soucy – General Manager, Birch on Elm: “I really love this dish. I love steamed buns. I love pork belly, everybody loves pork belly.”
Nick Provencher – Executive Chef / Co-Owner: “We make the homemade steamed buns and fill them with house braised pork belly, we get in big slabs of pork belly. And then crisp it up in a pan to order with a little Vietnamese pickled daikon and carrot, some cilantro and fresh cucumber to give it a little crunch to it. And it’s pretty sensational, it’s my favorite thing on the menu.”
As for the dessert menu, cheesecake is always the house favorite, especially this salted caramel cheesecake with pomegranate molasses. It’s familar, but different. Rich, but somehow refreshing.  And that’s how they keep things fresh and interesting at The Birch on Elm.
Joel Soucy – General Manager, Birch on Elm: “The food alone stands for itself. The drinks alone from a bar standpoint stand for themselves. The service alone stands for itself. But when you get that trifecta, when you find those places that are really special that have all three.  I think it’s something really special. And I don’t really care what city you’re in. I would get in my car and drive to a place like this.”
931 Elm Street
Manchester
NH
03101
603 782-5365
http://www.thebirch.restaurant