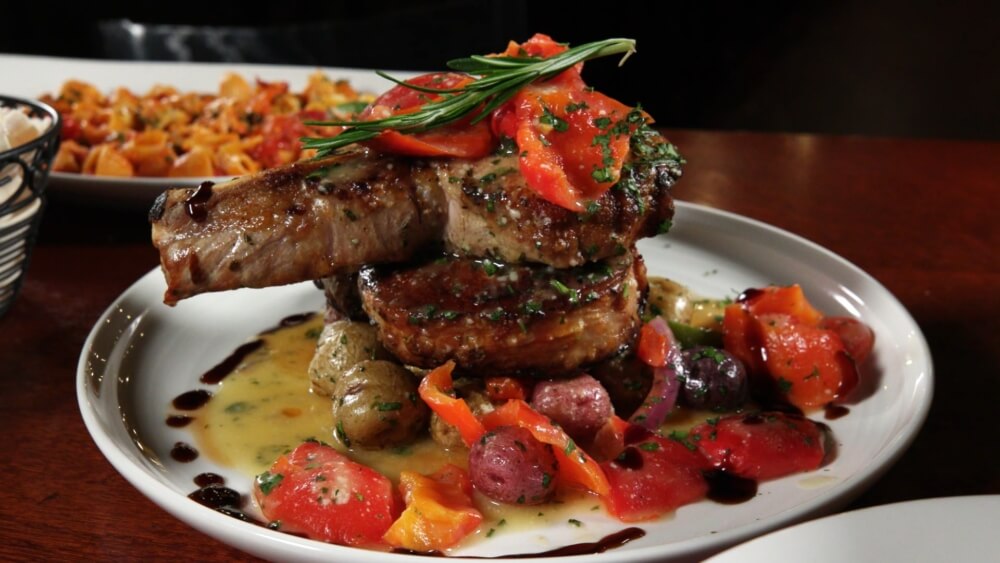 Nick Yebba: In every biteful, it’s heaven. And until you’ve had it, you don’t know what you’re missing.

Dave Andelman: Italian is one of my favorite foods. I know it’s the favorite food of Phantom Gourmet fans. Maybe it’s everybody’s favorite food. So when I’m craving pasta and red sauce and all my Italian favorites, I go to Teresa’s in Middleton.

Nick Yebba: Every day we try to make something a little bit different to give our customers a great choice and a great, great value.

Dave Andelman: There are lots of husband and wife teams in the restaurant business. Very seldom have I seen a father/son team, but here at Teresa’s, Nick Senior runs the front of the house, and Nick Junior is one of my favorite chefs.

Nick Yebba, Jr.: For the meatballs, we use the finest ingredients. We make them just like we make them at home.

Nick Yebba: We take time with them. They’re nurtured. We love the meatballs, and our customers do too.

Dave Andelman: Their meatballs are so good, you’ll be saying, “Columbus, thank you for discovering America.”

Dave Andelman: Of course, Italian food is all about pasta, but not that many restaurants make their own pasta anymore. At Teresa’s, they make it fresh by hand, and you can taste the difference. It is oh, so good.

Nick Yebba, Jr.: The pasta here at Teresa’s is great. We make it daily. The texture is to die for.

Nick Yebba:Â Pasta is a way of life. Going back generations, it was a peasant food. Pasta is a staple in the Italian heritage.

Nick Yebba, Jr.: Bolognese is great. We use three different types of meat in it: ground beef, pork, and veal. We make it daily. It braises for about five to six hours.

Nick Yebba: Flavors from all the different meats that they use in there, with a little bit of a taste of the carrot that’s put in there, it’s a delight, and another dish that you can stop eating.

Dave Andelman: Just when you think pasta cannot possibly get any better, they make a spaghetti with pesto and burrata.

Nick Yebba, Jr.: So, this pesto burrata spaghetti is amazing. We base it with our famous Milano sauce at the bottom of the plate, pair it up with our fresh spaghetti pesto, and it’s topped with a ball of burrata cheese. Unbelievable.

Nick Yebba: Everybody loves that dish.

Dave Andelman: Spaghetti with pesto and burrata. I’m a chicken parm freak. It’s one of my favorite foods. However, chicken parm is a little heavy on the red sauce and the cheese. Here they make something called the Pollo Milano. This is a pink vodka sauce, a little lighter and, dare I say, maybe even better than the chicken parm.

Nick Yebba, Jr.: So, Pollo Milano is a giant, panko-crusted piece of chicken, and it’s smothered with our tomato cream sauce. It is absolutely ginormous.

Nick Yebba: It was Nicky’s brainchild dish. He made a special sauce. He used our marinara along with cream and other ingredients that gave it such a great flavor. He poured that over a huge, huge chicken cutlet. Absolutely delightful, and it has been a favorite here for many years.

Dave Andelman: I mean, is there anything that goes better with a glass of Chianti than pork chop, vinegar and peppers? I don’t think so.

Nick Yebba, Jr.:  Pork chops, vinegar peppers, that’s another dish that everybody tries to duplicate. I believe, here at Teresa’s, it’s hands down the best vinegar peppers and pork chops there is out there. Pork chop portion is absolutely huge. We use the freshest pork available to the market. We use a sweet vinegar peppers on it with a pan sauce, crispy potatoes. Unbelievable.

Nick Yebba: The red vinegar peppers that we put on top, absolutely scrumptious. The juices of the vinegar peppers go right through the meat of the pork chop. Gives it a flavor that’s so mouth-watering, you just have to look at it.

Dave Andelman: Teresa’s has been around for 13 years, serving all your favorite Italian foods, but Nick Junior is always adding little twists and turns, updating the menu, giving you new reasons to come back.

Nick Yebba:  It’s the same Teresa’s, the same service, the same quality products, but every day we try to change things to make things better for our customers. Always looking for something different because that’s what our customers want.

Dave Andelman: So, if you love Italian comfort food done right, you have got to try Teresa’s in Middleton.