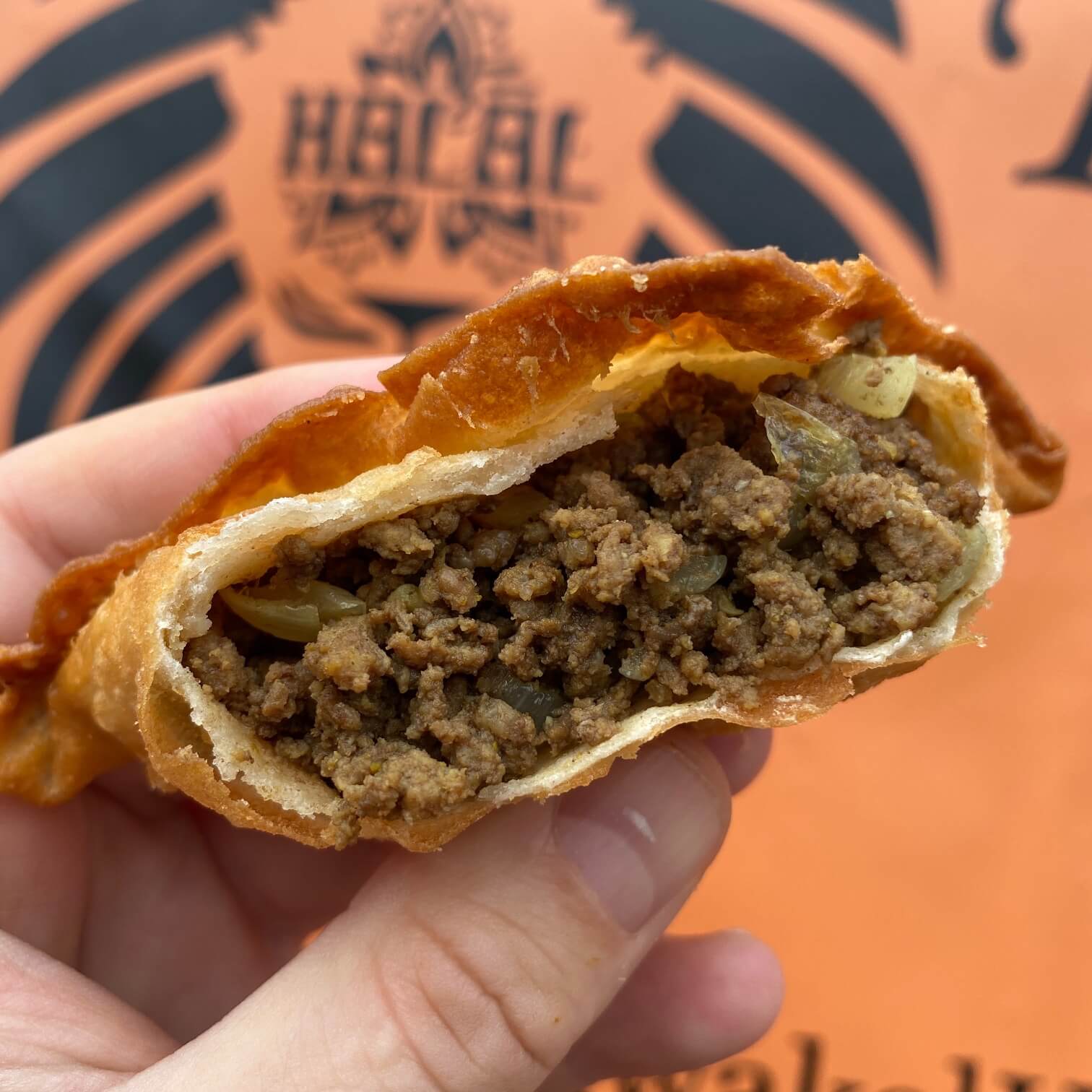 “We are in a residential part of East Boston in the Jeffries Point neighborhood at a restaurant called Tawakal Halal Cafe. It’s a family owned and operated place run by Yahya Noor along with his mom and his sisters. And they specialize in Somali cuisine with flavors from all over the world.”

“This is a Somali restaurant, it’s called Tawakal Halal Cafe. Tawakal means ‘rely on’, so we rely on one another. A lot of people don’t know what Somalian food is. So the way I usually explain it to our customers is basically Somalia was colonized by Italy. So there is fusion from Italy which means the pastas, those are dishes that we have. And also how we make our sauces. And then with the majority of our dishes basically it’s similar to Indian food because India did trade in Somalia, so we use a majority of their spices. We also say you can take any dish and make it a Somalian dish.”

“This is my first time eating Somali cuisine so I basically ordered one of everything on the menu. Spaghetti with meat sauce. Definitely not something I expected to find on the menu at a Somali restaurant. So we’re going to try the famous spaghetti with meat sauce. First of all, it’s a giant platter. This is like a pound of spaghetti. Tons of slow roasted meat in there, some veggies, some onions. So it has that familiar comfort style like a spaghetti and meatballs but there a definitely some different spices in here. Especially cinnamon, so it has this sort of sweet and savory kind of interchange. It might look like spaghetti and meatballs, but it’s not. It’s better.”

“Everybody that comes here who is familiar with pasta and ground beef, that’s also one of the dishes that they ordered. They’re like ‘we need that.'”

“Sambusas, this is a must order appetizer. It is like an Indian samosa. This is a little bit of a spin on it. It’s a sambusa. What does that mean? It’s more crispy, more flavor, more delicious. You can get a veggie sambusa that has the spinach and potato and corn in there. Or my favorite the meat sambusa, lots of slow-roasted beef in there. It’s not too fatty, actually very lean, and way lighter than you would expect.”

“The sambusa itself is filled with meat. And what you’re tasting, not just the meat, you’re actually tasting all the spices.”

“You can hear it, it’s so crispy. Oh yeah, let’s go in. Crispy on the outside, soft in the middle. A little bit of onion in there. Best sambusa ever.
There are lots of similarities between Somali food and Indian food. Lots of dips, lots of bread, lots of chapati, and biriyani. Famous rice dish, you can get it with chicken, with lamb, with beef, with goat, I got the chicken here. But the rice is really the key. They put a lot of lot, a lot of passion into this rice. This rice has the three F’s: it is fragrant, it is flavorful, and it is fluffy. Fabulous. That’s four F’s. That’s a lot of F’s.
The ultimate fusion dessert: Chipati Nutella. It has that thin bread that they roll out even thinner, put it in a spiral, inside your famous chocolate hazelnut spread. Throw on some vanilla ice cream, and you have the perfect sweet ending to an incredible meal.”

“We don’t serve an exotic food that is so scary to people. We serve any other ordinary food that if you enjoy flavors, if you have that good palate definitely you would know to come here. And if you enjoy anything that comes on Phantom Gourmet, come here you’ll enjoy this food. If we have Dan here, I’m sure everybody else should come.”

“Whether it’s sweet or savory or spicy. Or it’s Somali or Italian or Middle Eastern, you are guaranteed to have a meal you will never forget at Tawakal Halal Cafe.”