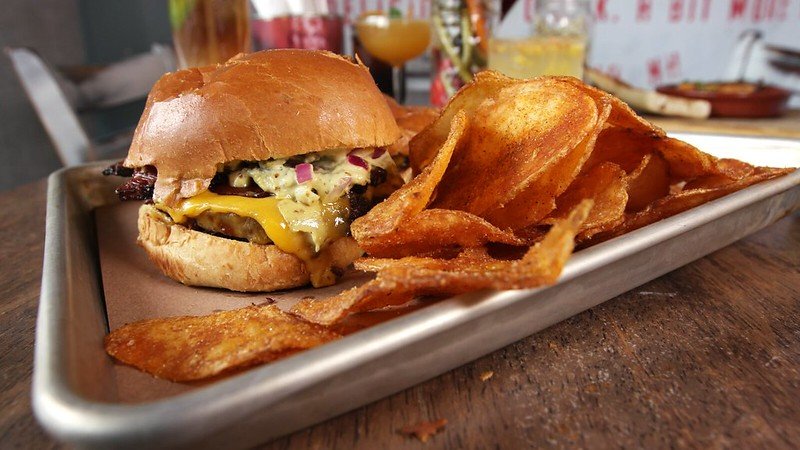 “Everybody, you know, looks at them as they walk by cuz they can hear them.”

“It always smells delicious in here.”

They’re definitely firing on all cylinders at Stones Social. Located in Nashua, New Hampshire, Stones Social is a funky, fun spot serving amped up versions of all the foods you love.

“We opened up in June of 2020. We are the third restaurant in the Stones Hospitality Group. First, of course, Cobblestones and Moonstones. And now Stones Social. So we like to say we’re kind of the baby of the two serving creative comfort food, inventive cocktails. It’s a more casual space.  The moment you walk in, you’re facing the bar, the bartenders are here to greet you. We are counter service. So it allows the guests to move more freely within the space to kind of choose their own adventure. Whether you want to have cocktails..whether you want to have a full three course meal, both are available to you.”

That’s Beverage Manager, Aislyn Plath.  She and her team have created a casual space where the fun starts the moment you arrive. “

We are counter service. So the guests will come to the bar talk to the bartender put their order in. And when we are assigning the check, we assign you a can.   We created all these cans with different artists and their records.  We hand you a can, it contains your napkins and your roll ups. And you take that to the table. And now the food runner knows to take your wings over to Diana Ross or David Bowie.  If we give you the Diana Ross can we know that your food is heading to Diana Ross because that’s how your ticket is assigned.”

From there, you’re met with a menu featuring creative craft cocktails and unique takes on classic dishes.

“We’re serving food that is recognizable to you, but is playing with flavors is presented in a way that is going to be exciting for people.  So there’s a visceral experience happening in here.  We have the fire in the background. It always smells delicious in here. It’s fun.”

If you want to kick your meal off right, it’s always great to start with a snack- and at Stones Social they have you covered.

“Jar snacks are going to be that communal sharing thing. If you’re sitting at the bar, you’ve had a couple beers and you need something salty.”

There are housemade BBQ Chips and a sesame furikake popcorn, crunchy house pickled vegetables and smoked maple glazed bacon.  But the must have snack is Stones ultra-addictive pork cracklings with queso.

“The pork cracklings have also known as pork rinds, also known as chicharrones…They are salty. They’re savory. They’re that sweet from the pork. And then we serve a side of beer cheese on the side for dipping.  So delicious.”

The wood burning oven is not only the centerpiece of the restaurant, but also it’s the key to making most of the dishes on the menu’s skillet section, including meatballs smothered in sauce and the garlicky jumbo shrimp.

“So we are so lucky to have this word burning oven in the middle of the room. In it we are the garlic shrimp, which is going to be three head on prawn served in a really delicious garlicky white wine sauce with some toasts on the side for dipping in.   It’s going to heat items up quickly. So what is really nice about that is it’s going to really snap all those flavors into place. And the smoke from the wood does create a nice smoky component to the dishes. I just think everything’s better over the fire.”

And nothing quite tops the Smoke Kissed Wings.

The Pho French Dip is a Vietnamese twist on a French Classic featuring Pork Belly, Pickled Vegetables and Sriracha Aioli all on a crusty Baguette with Mushroom Broth for dipping.

“A lot of different flavors going on there. You have a little spice from the sriracha aioli you have that nice acidity from the pickles, and that savory pork belly and then a really beautiful baguette to soak up that smoky mushroom broth on the side.”

Every restaurant needs a good burger, and Stones’ version is so good, they call it the #1

“It is number one, as we’ve heard from many people. It’s going to be two, four out smash patties with a special sauce and pickles is just delicious. And yeah, people say it’s number one.”

Entrees include this beautiful vegetable fried rice topped with unctuous pork belly and the ultra-creamy Mac and cheese topped with short rib.

“It’s got a little bit of that barbecue sauce on there. It just melts in your mouth. The it’s so tender. It just falls apart into that mac and cheese.”

So whether you stop in for a snack,  a skillet or something more substantial, you’ve got to try Stones Social.