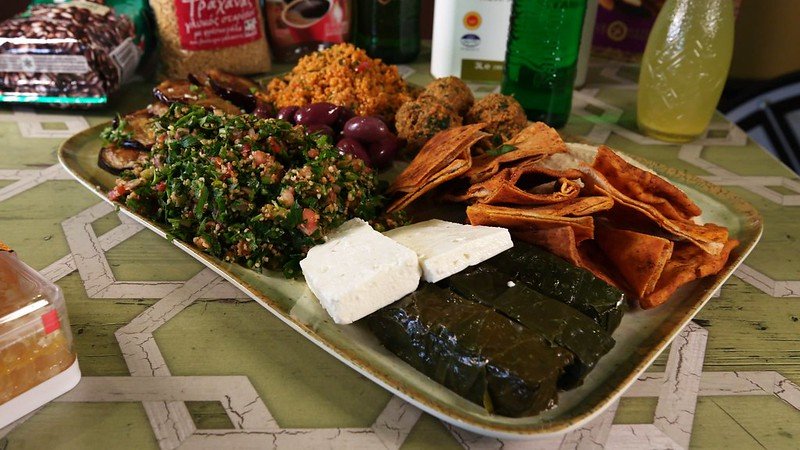 Ara Janigian is one proud Armenian.

“The gyro plate. Okay. I mean, everyone thinks it’s Greek. It is Greek but the Armenians make it the best.  So I might be Armenian, but I make the best Italian grinder in Rhode Island. It’s Armenian pizza. Beats the hell out of everybody’s pizza.  It’s like an Armenian food explosion in your mouth.”

And not only is Ara fresh, so is his food — at Sonia’s Deli.

Located in Cranston, Rhode Island, Sonia’s Deli is part Mediterranean market/part deli, where the energy is high and the highly delicious food is made fresh on site.

“Sonia is is if you died and woke up in food heaven. I would say it is Rhode Island’s destination for all Mediterranean, Middle Eastern Armenian needs.  We have everything for your Mediterranean munchies, homemade hummus, grape leaves eggplant. Then we have your classic sandwiches, grinders, salads, you name it, we have it.”

And Ara and his sister Sevan oversee this comfortable and welcoming spot, where first timers become long timers.

“I’m from Massachusetts, and I’m here at least once a week because I just can’t get enough of it. “

“When you walk in, you feel like family, even if you’ve never met them before.”

“I mean I’ve become friends with them, that’s just how they are.”

“They’re always in a good mood, but everything is super fresh..It’s homemade. And you can taste the difference.”

There’s no better way to start your day than with a breakfast sandwich from Sonia’s- served on fresh Armenian Sweet Bread that’s made on site daily.

If you’re looking for something really sweet, have it topped with creamy nutella, and strawberries.  On the savory side, there’s  the Little Armenia sandwich- topped with a fried egg, muenster cheese and an Armenian cured beef called Basturma.

“The meat is what sets it apart. Right? Because everyone does bacon and ham but we do. It’s an Armenian cured beef similar to a prosciutto but better to be honest. It’s so flavorful, flavorful, so fresh. Honestly, I could have 10 of them.”

But the truth is, you’ll also want to save room for the sandwiches served at lunch.

Like the so called “Rock Star” Grilled cheese oozing with American, Swiss and Gouda. Or the “Red and White” served on a French Baguette with grilled chicken, fresh mozzarella, roasted red peppers and a tasty garlic pesto. And then there’s Italian- a stacked sandwich in which these siblings take great pride.

“We are an Armenian family. But we do make the best Italian around.”

“I have to say for Armenians we make a great Italian.”

But when it comes to the best sandwich overall, nothing beats the Eggplant Special.

“Okay, so this is a fan favorite. I don’t even like I can’t even do it justice.”

But Sonia’s superfan, Christine certainly can.

“Okay, this is the most delicious sandwich you’ll have in your life. Grilled Chicken. This marinated eggplant that I’m obsessed with mozzarella cheese tomato and the crunchiest French baguette.  I don’t know if you could zoom into like the oil oozing into like the soft French bread.  Can I bite it? That olive oil there. It’s like seeping into the really soft French bread.  The creaminess of the mozzarella cheese like good cuts through the acidity from the eggplant.  It’s literally like a flavor bomb in your mouth.   Oh my god.  I can’t talk. It’s like sorry for talking with my mouth full”.

When it comes to the Mediterranean side of Sonia’s menu, the best way to taste it all is to order a sampler platter.

“So we have our tabouli, our hummus, pita chips, rape leaves, feta cheese, olives, our marinated eggplant, which is to die for. So, got it all on one plate.  We do our sampler plates for lunch item and then we blow them up into larger scales. “

“You want to be the hit of the party. You let us make a platter you walk in with it. Instant most popular person there.”

Pizza is another party favorite. But here, they make an Armenian version called Lamejune smothered with a tasty blend of meats.

“It’s nice and light you know usually take a bite of pizza when it’s lay down. You could have five of these and go run a mile.”

There are also handhelds including a mouth-watering beef schwarma and the always popular, overloaded gyro plate.

“It should be illegal. It’s so much food for that price. That should not happen but it does at Sonia’s so it is our rice pilaf, our  gyro…with a side salad and you will not leave hungry.”

And for these two proud owners, a hunger to showcase the food of their homeland keeps them motivated every day at Sonia’s Deli.

“Our whole childhood kind of centered around our food that was associated with the culture. So I think that growing up that was just one of the most important parts of our life.”

“Our work ethic and family values, and treating all of our customers like family that’s instilled in us from from my ancestors.  Being Armenian, it’s who I am…and my sister and I are blessed to have each other by our side. It’s fun, and couldn’t ask for a better work partner.”