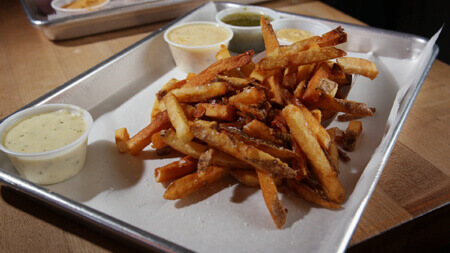 Who doesn’t like biting into a hot crispy french fry?

“Everybody loves french fries, and when you eat french fries like makes you happier. So it’s like why don’t we just give people what they want to eat, but kind of just do it a little bit better than you know what you’re used to.”

And to make those fries even better, there’s NOTHING better than lots and lots of Saus.

Located along the Freedom Trail in Boston, Saus is a small counter service spot specializing in french fries. Â

Owners Tanya Walker and Chin Kuo opened the shop 8 years back along with friend Renee Eliah and they’ve been making fresh fries ever since using hand-picked, aged potatoes. Â

“We like age our potatoes because an old potato actually in the better french fry. Â They’re aged for us. And we age them a little bit more here. Every single morning someone comes in and cuts like 200 to 500, 600 pounds of potatoes and then they’re blanched, which is like they’re fried at a lower temperature. And then we fry them fresh to order.”

From there, it’s all about the sauce. Â

“We have 15 homemade sauces. We do a truffle ketchup, a curry ketchup.” Â

“We have a roasted garlic mayo. We do a hot beer mustard. We have an Avo-goddess sauce. Which is like Green Goddess with avocado. We have a sweet chili. ”

We engineered it so that there’s something for everybody.”

And just how much sauce you’ll need depends upon your personal preference. Â

“My fry to sauce ratio is heavy handed on the sauce. Um, but no judgment here. It is it is what it is.”

But you will most certainly be judged if you order the Beast Mode Poutine.

“Yeah, no, you got to be in a definite some sort of mode to finish the beast mode.”

This pile up of potato is topped with every single item available in the poutine section of the Saus menu.

“You get the pork belly you get pork carnitas. Â You get bacon bits, because, you know, you need bacon, three different ways basically. Kimchi, crispy shallots, a scoop of Sambal, Â and then we put our secret sauce drizzled all on top and it’s it’s awesome.”

Other awesomeness comes under the sandwich section of the Saus menu. Â Â

“The Kimchee fried chicken is a like battered chicken thigh….And it gets this like crazy amount of crunch on the outside from the batter. And then the kimchi is our house aged kimchi,….a little bit of spice…And it’s red. And it makes like a really pretty sandwich as well as a super tasty sandwich.”

Meatlovers will want to try the Pork Carnitas sandwich piled up with onion, pickled chiles and a roasted garlic mayo….

Or try Saus’ stab at southern style cue, known as “The BBQ One”.

“We take a giant slab of pork belly and we slow cook it super slow. And we just like let it all like the juices just it’s ridiculous. And then we thinly slice it. So you’re looking at like a sliced like a thick slab of like bacon almost on your sandwich, but very unctuous. Â And then we just like pilot with scallions law and barbecue sauce.”

“You definitely get the richness from the pork. Really nice dry rub on it. Â And that kind of sweet smokiness from the barbecue sauce really goes well. Â Very delicious.”

After all of that savory, you may want a sweet and besides French Fries, the folks at Saus also specialize in beautiful Belgian waffles. Â Â

“Our waffles are a small dessert waffle. They are loaded with pearl sugar. Â It creates these little pockets of sugar crunch inside the waffles. And then when it hits the iron it like caramelized this and you get this like crunchy, sugary ridiculousness all around the waffle. But it is like a small like little dessert bite at the end of your you know, french fry extravaganza. Â Â When you bite into the waffle, you can expect just an explosion of show in your mouth.  You’re going to get like the softness of the waffle. But you’re also going to get those pockets of crunchy pearl sugar bites, and then we recommend smothering that and sauce as well. ”

“You know once again, it’s like some for everybody. But I’m into the coconut custard. Like custard stuff. The coconut customers no cream was made with coconut cream. Very delicious.”

And for these owners, while running a restaurant may not be easy, making America’s favorite snack food, in a fun casual environment makes work, pretty fun.

“I do love doing what we’re doing we’ve been here eight years and it just gets better every day. Â Â We’ve created like a true, very indulgent menu and so everyone comes in here with the expectations of like they’re going to have a great time and they’re just going to eat whatever no guilty feelings involved and I think it just makes for really happy people.”