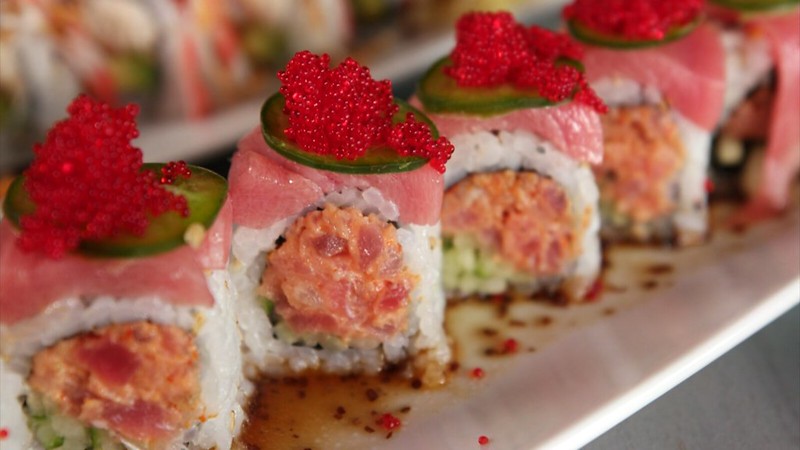 Why have one kitchen when you can have three?

“So when you first walk in, you see the bar and that to me is kitchen one, it’s probably the first thing you want to do when you sit down, you’re gonna order a cocktail.  Our second kitchen, I would say, would be the sushi bar, which is right behind the bar. And that’s where all the sushi comes out of.  And then in the kitchen we have all the other entrees and sides and salads and stuff like that.”

And you’ll find good things REALLY DO come in threes at Salt Society.

Located on Front Street in Scituate, just blocks from the Harbor, Salt Society is a place where everyone will find something they truly enjoy- no matter what they’re in the mood for.

“I love flexibility. I love being able to go out and knowing that you have so many

I don’t think anything should be put in the box. Really.  There’s something for everyone. Like I know for me, I’ll come and I’ll have sushi rolls with friends but there’s other friends that…can get a burger or they can get a piece of fish or a salad ..so it’s it kind of appeases everyone.”

That’s owner Kara Tondorf, a South Shore restaurateur who wanted to create an edgy, yet cozy restaurant. Â  So along General Manager Matthew Hawksby, they made a space with lofty ceilings, sunny window seating, and a concrete bar in the center of it all.

“It’s kind of sort of having a city feel to it, but something’s located in such a beautiful town is such as Sciutate itself.”

Your Salt Society journey should always start at the bar with one of their signature drinks.

“Our cocktails are hand batched. Every single ingredient that is in those cocktails, other than the actual alcohol itself is handmade by our mixologist’.

From there, it’s time to take a trip to the sushi kitchen, Kara’s personal pride and joy

“I had always wanted to bring sushi down to this small town for selfish reasons, because I love sushi. A place where you get fresh fish that is caught right in our backyard, which there’s nothing better than that. I don’t think it would be humanly possible to get fish any fresher than being here.”

The rolls here are edible pieces of art, whether you go for the Green Harbor Roll stuffed with spicy salmon and topped with green tobiko. Or the so-called Shaggy Dog, named for the shaggy looking crabmeat on the exterior, and stuffed with crabmeat and tempura shrimp and avocado. There are also classics like Dragon Rolls. And twists on the standards like this Spicy Tuna roll spiked with jalapepeno.

It’s all created by Pradip Budhathok- a sushi chef who wowed Kara the second she tasted his work.

“He’s an artist. I knew there was an art to rolling sushi, but I didn’t truly know what it meant until I met him. And he just not only is everything visually nice, the flavors are incredible.”

Back in the main kitchen, the team is pumping out classic comfort fare done right- like this heaping pile of hearty Ribeye Poutine.

“They’re just a big pile of fries with cheese curds and gravy and shaved ribeye. If you’re looking to kind of go off the diet wagon, it’s a great choice. They’re delicious. People love them.”

There are Asian influences throughout the menu, like house smoked duck over a chilled noodle salad, and mussels swimming in a Thai coconut curry broth. And for a somewhat healthier spin on buffalo wings, try the buffalo cauliflower.

“It’s one of my favorite appetizers. It’s just light and healthy. And you know, it’s like, you kind of get that taste of being bad like it’s fried. But it’s not super like heavy duty.”

The entrée section of the Salt Society menu has a steakhouse kind of feel, offering beautiful meats and seafood served a la carte.  So you can get a tender prime sirloin served with a selection of salts to customize your meat the way you like it…

From there, pair it with sides like haricots vests, Mac and cheese, sun-dried tomato cous cous and broccoli rabe.

“The Executive Chef has are these great different seafoods and steaks that he has on offer. So that al la carte style, and that you can have with all these different sides. So it’s kind of that that choice for everyone depending on what they feel like.”

And if you feel like something simple, the Society Burger was made just for you.  Piled up with 2 smashed patties, American cheese, lettuce and their secret sauce.

“Very basic, but very flavorful. With a secret sauce, the society sauces is delicious. American cheese on a brioche bun.  It’s really good. Highly recommend it.’

At dessert, you have to try Syllabub- a traditional Cornish dessert not often found in these parts.  Made with a pear puree, Chantilly creme and finished with candied pepitas, this sweet offers a light and lovely way to wrap up your meal.  And it’s a meal that’s sure to be memorable when you dine at Salt Society.