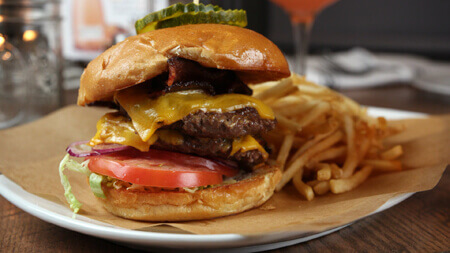 When a restaurant serves all the foods you love, in an atmosphere that always feels like home, it’s easy to understand why it’s still going strong after twenty years. The only thing that’s not easy understand is why you haven’t been to Romaine’s.

Romaine’s Wood Grill and Bar in Northborough is the kind of neighborhood restaurant most other restaurants try to emulate. But for the past two decades, this one-hundred-sixty-five seat spot has been the real deal, thanks to the hard work of husband and wife owners Erin and Richard Romaine.

Erin Romaine – Owner, Romaine’s: “It’s really just a mix of people. They’re all fun. They’re really down to earth. They’re coming to just feel at home. Nothing pretentious about us. Really just a great place to dine, and enjoy your favorites.”

And it seems like everyone in town is here doing just that; filling the big busy bar on one side of the restaurant, and the welcoming dining room on the other side.

Richard Romaine – Owner, Romaine’s: “The atmosphere is comfortable, I have a lot of staff that has been with me a long time, so they’re familiar with a lot of the customers that come in, they know their names, so it’s like feeling like you’re at home.”

Richard grew up in South Louisiana, so much of Romaine’s creative American menu has a little Cajun flair, and all of it is full of flavor.

Richard Romaine – Owner, Romaine’s: “The big thing is I like to have big flavor, whether I’m making Italian style dish or, French style dish or anything else. I just like it to be big in flavor.”

Take for example, the pile of addictive Truffle Parmesan Fries, always made fresh to order, and quite possibly, the best you’ll ever eat.

Erin Romaine – Owner, Romaine’s: “I know everyone has French fries, but I have to say we really do have the best truffle fries you’ll ever try. We’re told all the time, ‘Oh my gosh, these are the best truffle parmesan fries we’ve ever had.’ They’re always on point. They’re crispy, they’re flavorful, salt level’s on, the truffle flavor, the parmesan, fresh parm, it’s great.”

The Crab Cakes with corn salsa and chipotle aioli are another favorite here, especially for Erin.

But of all the appetizers, the one you absolutely must not miss is the uniquely delicious Creole Barbeque Shrimp.

Richard Romaine – Owner, Romaine’s: “It’s really not traditional barbecue where like on the grill. It’s actually made in a pan, it’s with the sauce. Lot of lemon juice, shrimp stock, Worcestershire, a lot of black pepper, some butter, little bit of cream. So it’s just a very big flavor. It’s not subtle. It’s not like anything you’ve tasted before. Especially around here. We grill up some nice Ciabatta bread and serve it with it, so it’s great to dip into the sauce. We’ve had it on the menu for a long time, and people love it. I could never take it off, you know. It’s a great appetizer.”

When it comes to entrees at Romaine’s, there are casual options like Fish Tacos, a Nashville Hot Fried Chicken Sandwich, and a double patty, double bacon, double cheese Smashburger.

Then there’s some real comfort food fare, like the outstanding Fettuccine Bolognese.

Richard Romaine – Owner, Romaine’s: “We take veal and pork, pancetta, and we simmer it a long time. And then we shred it, it just gets a richer feel, and it’s just a very hearty dish, it’s filling and it’s delicious.”

Erin Romaine – Owner, Romaine’s: “We’ve had people who’ve gone to Italy, no lie, come back and say ‘your Bolognese here is the best I’ve ever tried.’ We use fresh pasta, not a heavy, heavy sauce. It’s magical.”

If you prefer something grilled, there’s a thick cut sixteen ounce Pork Chop with apple cider glaze, or the always popular Steak Tips.  And what makes both of these dishes so delicious, is that they’re cooked over live fire on a wood grill.

Richard Romaine – Owner, Romaine’s: “It adds such a great flavor to the meats or fish, whatever you’re grilling. At the time when we did it 20 years ago, there wasn’t very many wood grill restaurants, a lot of them are using them now. It adds a lot of flavor, it’s an extra expense, it’s a lot more difficult to operate than a regular gas grill, but the end result is way worth the effort.”

Rounding out your meal at Romaine’s is easy. Because while the Cherry Almond Tart, and Hot Beignets with chocolate sauce and lemon curd are both great, the sweet treat you absolutely must order is the Cinnamon Bread Pudding with butter-rum sauce and chantilly cream.

Richard Romaine – Owner, Romaine’s: “We’ve had it on since we’ve opened. And I think the main thing is that it’s very comforting because the flavors are very familiar. It’s like eating a cinnamon roll, but in a very saucy way I guess you could say.”

Erin Romaine – Owner, Romaine’s: “It’s something so simple, bread, eggs, butter, cream. It is so good. The flavors are just so big and rich. It’s the perfect ending to your meal.”

And after twenty years, Romaine’s remains that perfect neighborhood restaurant, by always putting their customers first.