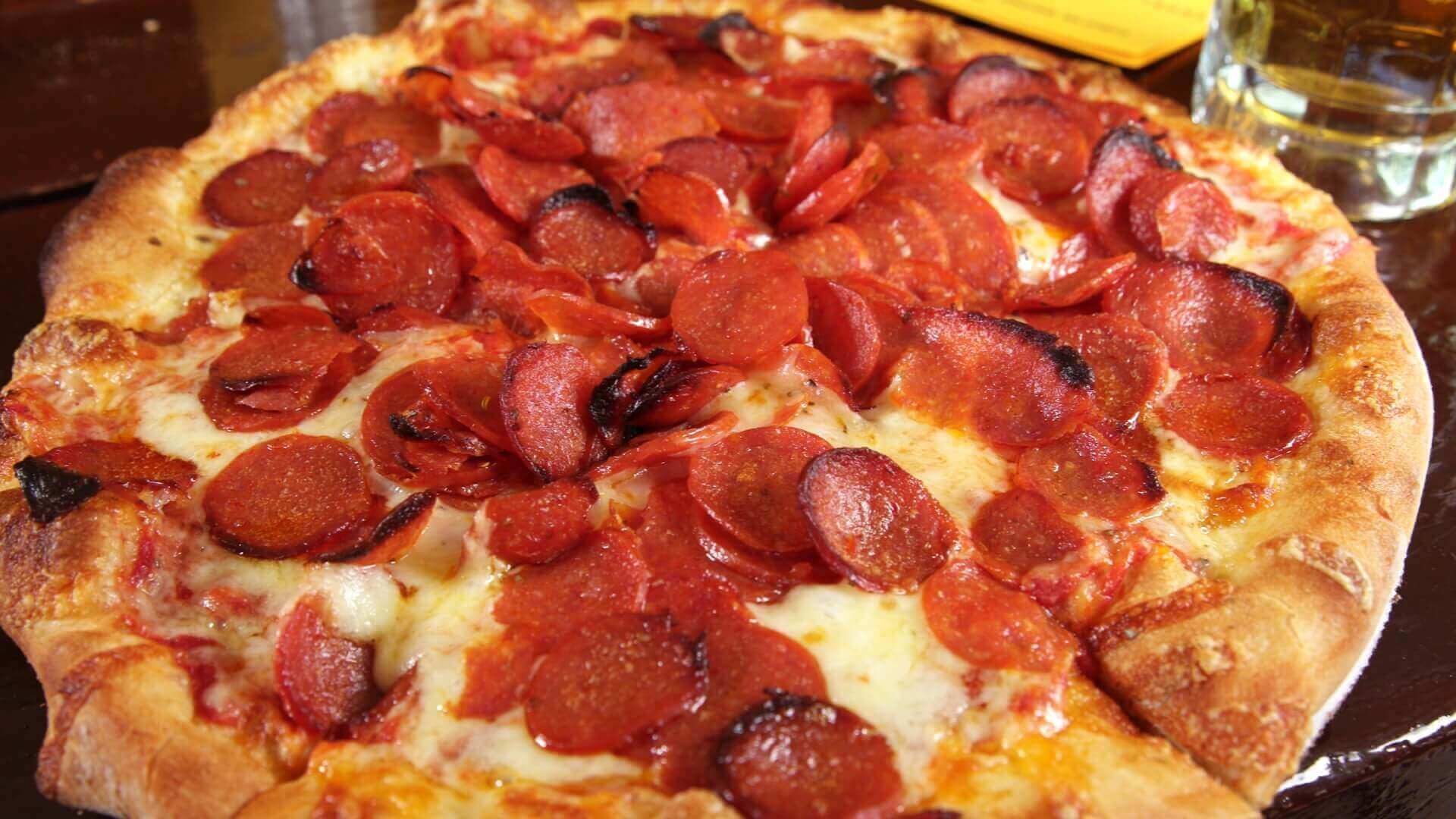 Dan Andelman: “Boom. Oh, yeah. Damn, that is good. I have eaten at hundreds of pizzerias All throughout new England, but if you ask me, there was only one that’s worth a 100 mile drive from Boston for a pepperoni pizza, and that is this legendary spot on route 16 in Center Ossipee, New Hampshire called the Pizza Barn.”

Don Meader: “This barn has been in the family since we moved up here in ’47.”

Karen MacIver: “Definitely still a barn. There are wide boards on the walls.”

Conner MacIver: “You’re sitting on the same picnic tables that you sat on in 1971. The floor’s the exact same. The shingles are the same shingles that went up in 1971. Try to describe it as an authentic experience that was never really attempted to be that way.”

Dan Andelman: “The Pizza Barn has been going strong for almost 50 years and it’s always been in the same family, the Meader family now onto their fifth generation.”

Don Meader: “I’ve had pizza a lot of places, but I don’t think I’ve ever had anything better than we have here.”

Karen MacIver: “I think one of the biggest things that makes it unique is everything’s homemade.”

Conner MacIver: “We make our own sauce, we grind our own cheese, so the interaction with all those ingredients makes it different than what folks are used to.”

Karen MacIver: “The pizza is fabulous. The best pizza you’ll have anywhere.”

Dan Andelman: “And here we are, pizza Mecca. All year long i look forward to this drive and these pizzas and they’re all mine. You get three sizes of pizza here. You got your mini pie, your stall and your barn. Mini pie, eight inch pizza. Stall size, 12 inch. The barn? That’s a big old 16 inch pizza. The classic cheese pizza is still the number one most popular pizza at the Pizza Barn and the cheese is the key. They use an 80/20 blend. That means 80% is a Cabot cheddar cheese. Very dense, very rich, very flavorful. It’s aged. And then the rest of that 20%, mozzarella, so it melts beautifully and it is absolutely delicious. Look on top of the cheese, you’ll see lots of little flecks of oregano. Oregano is actually a pretty dominant flavor at the Pizza Barn, and one of the reasons why it tastes so distinct.”

Karen MacIver: “Oh, I definitely think it’s an important ingredient. You’ve got to have that oregano and it’s just enough to add that final touch.”

Dan Andelman: “If I were to recommend three toppings for you to get at the Pizza Barn, I would recommend pepperoni, pepperoni, and pepperoni. Literally, the best pepperoni I’ve ever tasted on a pizza.”

Conner MacIver: “Hands down, no question, my favorite pizza is pepperoni.”

Don Meader: “The beauty of this pepperoni is that it cooks differently than most any you’ll ever find anywhere else.”

Dan Andelman: “This is unquestionably my number one favorite pizza at the Pizza Barn. The pepperoni. Stall size pepperoni. It has a perfect amount of crust, cheese, sauce and frankly a ludicrous amount of pepperoni. And that’s the way I like it. Each slice must have at least 10, 12, 15 slices of pepperoni. This pepperoni is spicy and salty, tons of flavor, and see how some of them are kind of wrapped up around each other in these little cups of pepperoni. Some of them are red and some of them are almost black, like burnt around the edges. That’s where the flavor kicks in, baby. I mean I know we’re in the white mountains up here, but this is like a mountain of pepperoni. Best pepperoni ever. If you want to push yourself for something extreme, this is the farmer’s daughter pizza, a large 16 inch pie that has virtually everything on it.”

Dan Andelman: “This thing weighs somewhere between five and seven pounds, but honestly there’s no way you could eat more than one slice. Each one weighs about a pound.”

Dan Andelman: “On top it seems like I’m eating something healthy. There’s like a virtual garden on top of the pizza, and then you realize underneath there’s like a pound of hamburger, cheese and pepperoni. I like that layer of the best.”

Conner MacIver: “We have customers that drive south of Boston, Rhode Island just for a Sunday drive to get here and have the pizza because it is worth it.”

Karen MacIver: “Especially if it’s in the fall, you’re going to see beautiful foliage. Definitely worth the drive. No question. Come up and get our pepperoni.”

Dan Andelman: “So if you like to take a little drive and you love a lot of pepperoni on your pizza, there is no place better to go than the Pizza Barn.”