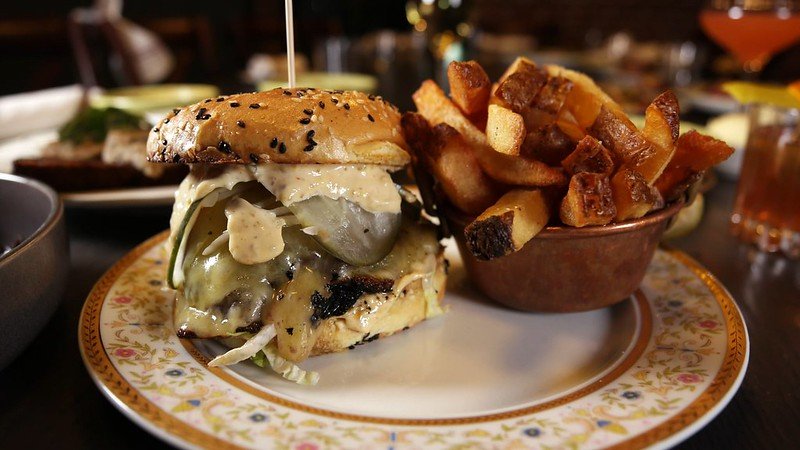 A roaring fire. Big hunks of beef. The smell of sweet smoke in the air. And classic New England cooking, served in an historic setting. For a truly memorable meal, you simply must take a ride to Northern Spy.

Located in Canton, Massachusetts, Northern Spy is one of the best, and most interesting restaurants to open south of Boston in years. Where the food, atmosphere, service, and style all harken back to the kinds of restaurants owners Daniel Myers and Marc Sheehan grew up idolizing.

Daniel Myers – Director of Operations: “It’s a classic New England restaurant. Focused on traditional New England food. For us at Northern Spy, it’s all about the classics.”

So the food here — like Prime Rib, Local Scallops, Baked Beans, and Brown Bread — is rich in history, as is the historic location where it’s served.

Daniel Myers – Director of Operations: “This site was originally where Paul Revere lived, had his house and had several kids with his wife right after his famous Midnight Ride. So he was able to come down here to Canton and start copper rolling. This was the first copper rolling mill in America. They did things like roll the Statehouse building dome, as well as the original hull for Old Ironsides. He started the Revere Copper Company, which is actually still in business in upstate New York today. They did the copper roof that we have on this building here. So this site’s about seven or eight acres of open park as the Paul Revere Heritage Site with our restaurant situated right in the center of it. You know, there couldn’t be a more fitting place, than in a historical space, cooking some dishes that also have their own historical bent to it.”

And they’re also paying homage to the past with the way much of the food is cooked at Northern Spy, on a wood fired grill that is the centerpiece of the restaurant, and the menu.

Marc Sheehan – Executive Chef/Co-owner: “We decided to bring wood fire into the restaurant, because when we first entered the space, we could kind of see the ghosts here. That like there were people here working, it was hot, there was fire, there were forges. And really, that’s what you’re doing in a kitchen. But we want to really honor those individuals, and that’s why we’re cooking over solid wood fire. Almost every item that you could get on the menu, sees this grill or has a component that touches the grill. It’s really something that I think permeates the menu but it also permeates the dining room that no matter where you’re sitting, you can pretty much see the flames and you can see people working on it.”

To start your meal at Northern Spy, there are old school options like Smoked Bluefish Pate with brown bread, and Baked Clam Dip with housemade potato chips for dipping. Then there’s this delicious twist on a classic dish, ‘Green Bean Casserole’ Arancini, made with arborio rice, mushroom bechamel, parmesan, cheddar, and hearth grilled green beans.

Marc Sheehan – Executive Chef/Co-owner: “Really what we’re trying to do, is make it taste like maybe what your mom made or what your grandmother made, or still does for Thanksgiving, just in a framework that ultimately is a little bit fun to eat.”

Another dish that’s always fun to eat are Chicken Wings, and here they have a beer mustard glaze and plenty of smoke from the grill.

Daniel Myers – Director of Operations: “Everybody’s got chicken wings, but very few people have the ability to grill them over open wood fire. And biting into a chicken wing that comes right off that grill it’s one of my favorite things. That first bite it’s just unbelievable.”

Much of the menu at Northern Spy focuses on beef. You can have it braised in a rich stout, served with eggplant and marinated peppers; atop a grilled flatbread with Harbison cheese, bean-pot onions, and arugula; or as a Double Cheeseburger with two smashed patties and lots of toppings.

Daniel Myers – Director of Operations: “Each of our burgers comes with the works. Shredded lettuce, sliced onions, sliced pickles, and our house secret sauce. You want it to be juicy. You want it to be crushable and crave worthy. This is not your health food burger.”

But when it comes to beef in its purest old school preparation, nothing tops Prime Rib.

Marc Sheehan – Executive Chef/Co-owner: “On the weekends, we roast a prime rib. We’ll get whole rib eyes in, we’ll then slow roast it over the fire, and serve a nice 18 ounce piece. And get here early because when it’s gone, it’s gone.”

Even more elusive than the Prime Rib, are the special Beef Ribs that come from that same big piece of meat.

Marc Sheehan – Executive Chef/Co-owner, Northern Spy: “We’ll take the ribs off the rib eye, after they’ve slow roasted for about 12 hours, and then we put them back up above the grill and smoke them. Lacquer ‘em up with some barbecue sauce. We’ll run them a couple times a month. Basically the more Prime Ribs we sell, the more Beef Ribs we’ll get. But as one guest said it’s something worth traveling for.”

If you’re not in the mood for meat, Northern Spy has plenty of delicious options, like Day Boat Scallops with grilled corn, smoked tomato, oyster mushrooms, and bacon, and a version of Mac and Cheese based on the original recipe from the 1790s.

Daniel Myers – Director of Operations: “This is not at all your standard mac and cheese. This is like an open faced mac and cheese in a certain way, where we use these long zitis, and we do it in a casserole dish. Like if you took a lasagna and seared it on its side and then exposed that. So you get these tiny little rounds that are really showing off a lot of their crispy texture, but it still has all the unctuousness that mac and cheese mandates with this base of cheese sauce and bechamel. Playful but still has that gooey hardiness that mac and cheese requires.”

When it’s time for dessert, there are plenty of tempting options, but the one they’re most proud of here is the Brewis Sundae, which is like a warm brownie meets bread pudding, served ice cream sundae-style.

Daniel Myers – Director of Operations: “Oh, the magic of having a hot and cold dish. Few dishes are exactly like that, where you have a component that just came out of the oven, and one that just came out of the freezer on the same exact plate. For me that is perfect. There’s nothing as good as the melting drizzle of ice cream as it goes down the hot brownie sundae on the edges.”

Marc Sheehan – Executive Chef/Co-owner: “As you eat it, one bite has a little brown sugar streusel on top, the next bite has caramel and chocolate bark, the next bite is chocolate sauce and more vanilla ice cream, or it’s all the pudding at the end just with everything swirled together. It’s a great opportunity for a build your own bite type of eating experience.”

And a meal at Northern Spy is a dining experience like no other. Where classic New England cooking is served with a side of history.

Daniel Myers – Director of Operations: “A lot of restaurants nowadays focus on new things that you might have never seen before. But Northern Spy focuses on great food, locally sourced, prepared well. A showcase of New England.”