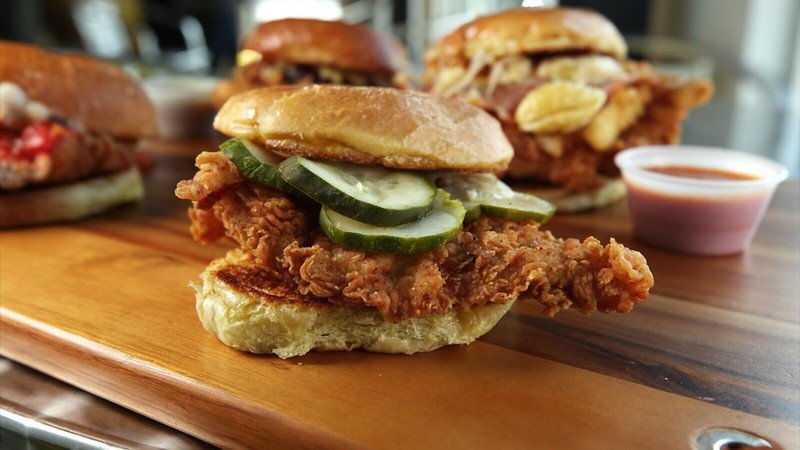 Forget 11 herbs and spices. Because if you want to make a great fried chicken sandwich, the key ingredient is love

“We call them love sandwiches. We make everything with our heart and soul.”

“It’s got a different flavor to any type of chicken sandwich around.  And when you bite into it, you just love it from first bite.”

“It’s so perfectly crunchy. While being perfectly moist on the inside.  It’s like it’s so juicy like literally dripping down your face while while you’re eating.”

“We’re passionate about it. We want people to talk about the sandwich for days. And it seems like that’s been happening.”

And after you’re done eating, you too will be talking about Mother Cluckers.   Located in Haverhill, Massachusetts, Mother Cluckers is a fast, friendly fried chicken shop making some of the best sandwiches in the area.

“Our chicken sandwiches, chicken tenders and chicken wings are…like nothing…around here.” That’s owner, Jomar Cannon. Who along with his father Gerald, sister Kamilah, aunt Ceci and family friend Brett, run this fast casual spot.  And while the name of the place may be MOTHER Cluckers, the inspiration for the joint actually came from Gerald’s father, Don. “

Mother Cluckers is a restaurant paying homage to my father. We’re originally from Tulsa, Oklahoma. And this is stuff we grew up with eating. He did most of the cooking at home. And so yeah, we had chicken sandwiches, I mean, you name it.  So we’re grateful to have …had my dad..and so now I have an opportunity to set things up for my children the way that I know he wanted to.”

The star of the menu is of course the chicken sandwich.

“I’m sure many other people do chicken sandwiches, but for me, can’t get better than what we have here.”

If you like to keep things simple, you should try “The Mother”:  A classic made with beautiful buttermilk crusted chicken and house made pickles. There’s the Ranch Life- topped with melted cheddar, bacon, and of course, buttermilk Ranch. And this spin on a Chicken Parm called the Mamma Mia.

“The Mamma Mia. That’s honestly probably my all time favorite one. It’s our homemade pomodoro sauce put the provolone asiago cheese crust right on the bun. Get the get the cheese nice and crispy. And then we have our homemade bruschetta that we make fresh every day.”

“I love the Mamma Mia sandwich because my dad made the best chicken parm there was and I just can’t find anything else that like really…satisfies me the way that sandwich does.”

For something completely over the top, try the Four Two Zero.

“The four to zero that’s such a crazy one. It’s our homemade fresh chicken cutlet. We have our homemade mac and cheese. We a slice of bacon on that homemade caramelized onions. When everything’s all done together, we put some french fries and our homemade mother’s Oklahoma red barbecue sauce right on top. It’s a messy sandwich, but it’s so delicious. It’s salty and sweet and it’s cheesy and gooey. It’s fantastic.”

And for a taste of Thanksgiving, minus the turkey, get the Winner Winner.

“Our winner winners are probably the messiest sandwiches we have here. It’s basically a take on the Thanksgiving dinner with buttermilk, fried chicken, cranberry sauce, stuffing, mashed potatoes. And some gravy on top that really makes it fantastic.”

“It reminds me of Thanksgiving, you know, with my family, you know? It’s fantastic. It’s messy, but it will get you full for sure.”

The menu doesn’t stop at just sandwiches. There are crispy juicy chicken tenders… And twice fried wings with a crunch that won’t quit.

“We dredge them in a corn and potato starch batter. So you still get all the flavor from the wing while having a being extra crunchy and then we also twice fry it to get it that extra crunch and it’s so juicy and so crunchy I don’t even know how it’s possible but it’s both.”

And for some added flavor, try one of their housemade sauces including Honey Mustard, Bleu Cheese, Haverhill Hot, Mother’s BBQ, Mild Buffalo, Sriracha Mayo, and Ranch.

You can snack on Classic Crinkle Cut Fries, served plain or coated with Mother’s Fire Dust.  Or indulge on a decadent bowl of Buffalo Chicken Ranch Mac and lots and lots of cheese.  “

We use Swiss. We use mozzarella, a little bit of provolone and sharp cheddar.  And it’s velvety. It’s unbelievable.”

Pretty much anything you get at Mother Clucker’s is unbelievable, from the food to the friendliness.  So you’ll leave with both your stomach and your heart feeling full.

“This is a family restaurant. And we want you to know we care about your family as much as we do about ours. So when you come here. We treat you like our family. It’s just that simple.”