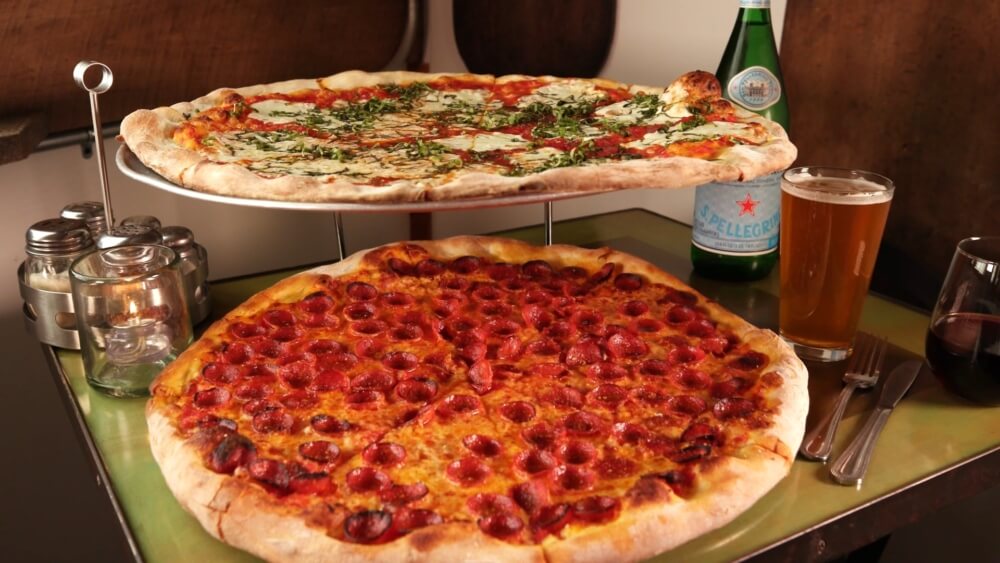 Chef Matt Louis and his team had a mission: find the perfect pizza… and bring it to Portsmouth, New Hampshire.

“There’s a lot of us that are really passionate about pizza here.  So we went to the iconic places like Regina’s, Pepe’s, Sally’s and we kind of took all the elements from all of them to really decide what it was that we really loved about pizza.”

And you’re going to love what you try at Luigi’s West End Pizzeria.

Located in Portsmouth’s West End, Luigi’s is a casual spot that specializes in pizza but offers a menu lined with your favorite Italian eats.

“We’re focused on and specialize in New York style pizza and that is backed up and complemented with a full Italian American menu featuring salads, appetizers, sandwiches, really popular pasta dishes, as well as really classic Italian desserts.”

And when he wanted to really capture the perfect pie, he brought in long-time kitchen colleague Matt Decker.

“I grew up in upstate New York. So 10 minutes from my house was at least 15 pizza places.  So just been eating it since the day I was born and just became really passionate about it.”

For these guys, it’s all about the dough.

“Our dough is really hardy with a lot of character.  It’s a it’s a two day fermented do ugh so there’s alot of flavor in that though. Really airy. It lends to a really nice crispy crust on the bottom but then a nice soft, doughy exterior as well, so you kind of get that that perfect mix of both.”

“We go for the thin crust, so when you pick up a piece of cheese pizza, you’re gonna be able to fold it up like you wouldn’t standing on the streets in New York. You’re going to take a bite, you’re going to taste our unique cheese blend that has a lot of flavor and then the tomatoes are just simple. We don’t over season our sauce and really let it shine through.”

And while they keep the toppings simple, they sure are satisfying.  Particularly the pepperoni.

“We’re using an authentic cup and char style pepperoni.  With the cup and char, as it cooks, it kind of … raises up into a into a cup.  It gently chars …and it also creates these little pockets inside of the fat from the pepperoni.

So when you eat it, you just get this burst of that flavor, and then you get that little bit of char that just adds that another element of depth.  Iit’s really fantastic. I think it’s incredible.”

Just as incredible is the white pizza topped with mozzarella, ricotta and caramelized onions.

Or for something overloaded with flavor.  There’s the salami pizza.   This beauty is topped with roasted red peppers and hot honey for a truly unique taste.

The meatball pizza at Luigi’s is an original, and that’s because these beautiful, hand-rolled spheres are sliced.

“We slice the meatballs.  It almost looks like like oversized pepperoni.  Some people when they first hear like, Oh, that’s meatball pizza because they’re expecting to see the more traditional, but then after eating it and tasting it with the flavors like Wow, that’s a that’s a really cool way to do it. It kind of opens up the flavor a little bit more.”

But the real star of this menu has to be the margherita.

“So the Margarita pizza is…a benchmark pizza that you really get judged on because it’s so simple. It’s one of the ones that you either you either nail it, or it’s not so great. And here at Luigi’s we nail it.”

Other options at Luigi’s include zippy buffalo cucumbers sprinkled with bleu cheese. And pull-worthy fried mozzarella- which is made in house of course.

“They’re super, super crispy on the outside. And that really fatty richness and the flavor, the depth of the mozzarella, nice gooiness when you pull it out of your mouth…There’s not much better than that with our marinara to dip it in.”

And when it comes to pastas, the chefs have their favorites.

“One of my favorite pastas is the caccio Pepe, which is a very,very simple pasta of basically cheese and black pepper.   And it’s Parmesan cheese, little bit of vedge stock, little bit of lemon, and finished with black pepper and a little bit more Parmesan. And it’s one of the simplest pasta dishes to make, but when done right, it’s absolutely delicious.”

“I gotta go spaghetti and meatballs keep it classic. I love those meatballs so much that when you put it with a little bit of housemade marinara and some spaghetti, it’s just a game winner to me.”

For another winner, get yourself a chicken dinner… in the form of Luigi’s Chicken parm sandwich.  This massive sub is stuffed with pan fried chicken topped with cheese, and melted perfectly. SO PERFECT in fact. It’s hard for anybody to resist.

“It’s really one of those sandwiches that you want to eat every single day and you have to discipline yourself not to.”

When it comes to dessert, forget discipline and order some housemade Italian ice… or some of Luigi’s hot zeppoles- made with the best dough around.

“We have a lot of dough around here. It’s a pizza place. There’s dough everywhere. The zeppoles pizza dough that we cut into nice little kind of pillows. And we fry them just super light and airy.  Dust them in powdered sugar and it’s a great little sweet way to end the meal.”

And much sweeter than that, is the passion behind the place.

“It keeps me energized. Keeps me on my toes. None of it was planned but it’s been it’s been great doing it and I I really wouldn’t change it if I had the chance.”