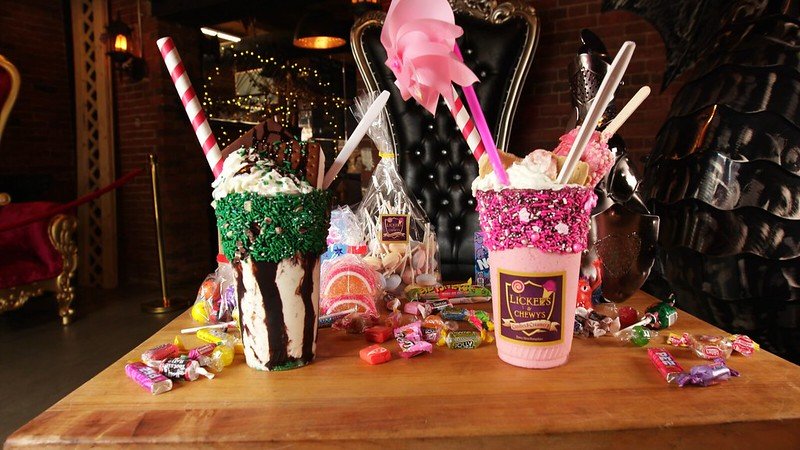 Lickees and Chewy’s Chris Guerette is a man who is serious about sweets.

“Just a huge candy fanatic my whole life. Just love the colors. Love how it makes people feel.  Love the fact that you can walk into a store with like $1 and still walk out with like a bag full of candy. That’s important to me.”

And you too will feel like a kid in a candy store- when you visit HIS candy store, Lickee’s and Chewy’s.   Located in downtown Dover, New Hampshire, in a 200 year old mill that looks more like a castle, Lickee’s and Chewy’s is a dream come true for former Air Force intelligence officer Chris Guerette- who playfully named this unique candy and ice cream shop after a term he heard while serving overseas.

“It’s an old army term that means junk food, candy, these kinds of things that were put into care packages sent to individuals in Afghanistan and Iraq and all these countries.”

And at 5,000 square feet, the space itself is massive.

“It’s been called a confectionery kingdom. It’s probably the biggest selection of candy in the northeast.  We’ve got products from all over the world.  We have classic candies. We have gummy bears. We have jelly beans, we have Pez, we have licorice, we have spicy candies. We have a huge selection of chocolate bars . We have lollipops. We work with over 30 different vendors to have such a big selection. “

And while candy is dandy, the shakes at Lickee’s and Chewy’s are the true superstars.

“One of our biggest specialties here are gigantic ice cream shakes that we call King shakes.”

“They are fit for a king and a queen and the whole royal court.”

If you want the royal treatment, order the Pink Flamingo- a seasonal shake with blended raspberry sorbet, lemonade, seltzer and vanilla soft serve topped with sprinkles, cookies and a strawberry shortcake pop. And then there’s the so-called, Hip to be Square shake.

“It’s a mint, chocolate chip and vanilla ice cream shake.  And then on top of that is like a mint sprinkle combination with a full size Klondike ice cream bar and a small size Ice Cream Sandwich. You get a spoon with it.  You got a gigantic, colossal straw with it. So you got to kind of have a little bit of a shake a little bit of toppings and kind of go back and forth. “

For something eye-popping and palate-pleasing, dive into the Coral Reef.

“It’s a blue vanilla ice cream called dinosaur crunch.  We topped it with gummy sea creatures.  It’s got some sour belts on it.  Everybody loves it. And no matter how many people come and get these shakes, they think they know what they’re getting. But when we deliver them right in front of their face, they’re just eyes light up, they start getting their phones out and taking pictures.”

“The first thing I did was take a picture.”

“Very often the moms will let the kids take any, any sips until she’s gotten a few pictures of them.”

Other popular frozen goodies include shaved ice, served straight up or topped with creamy soft serve.

“If you pour the syrups that go on the shaved ice on top of soft serve, you get a really unique flavor combination.”

There are also smooth and rich and housemade dips for everything from cones to frozen bananas.

“So our ice cream dips, because they’re made with top of the line chocolates. They don’t just break apart when you take a bite out of the ice cream. They melt in your mouth.”

And for something completely unique, treat yourself to a bubble waffle- a warm, fluffy treat filled with your favorite flavors.

“It’s a soft, chewy waffle that’s made as it’s ordered so it’s hot. And then you fold it in half and you add ice cream and toppings to it  so that makes for a really nice combination. “

With such high quality chocolate made on site, you would be crazy not to pick up some of Lickee’s and Chewy’s signature confections, like these oversized nonpareils and jaw dropping peanut butter cups.

“We make giant peanut butter cups.  We have like eight different kinds. We also make our own line of chocolate bars. And there are various bars with a lot of different flavors in them, including one with dried lime and raspberry and pop rocks in it that we call the Pixie Dust.”

But for a true test for your tongue, ask Chris for one of his mega sour fruit candies.

“We have a set of the most sour candy in the world, made by a company called Barnett’s.  So if you put one in your mouth, and you can keep it in there for like 30 seconds, then you’re pretty brave. “

“So these are these are the sour bombs and now we’re going to try these things. I’m not sure its going to last for more than half a second though.”

“Everybody who’s tried them has usually been surprised or overwhelmed at how sour they are.”

And whether you’re into sours, sweets, or shakes, you’ll find it at the confectionery kingdom known as Lickee’s and Chewy’s.