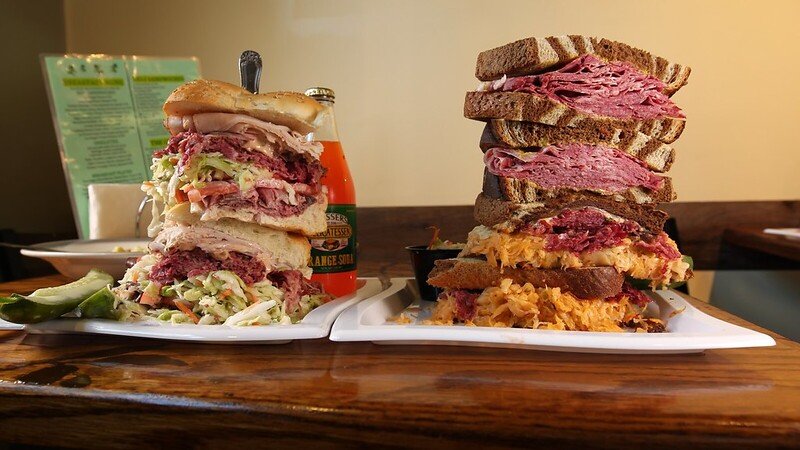 We have great food.

Doesn’t get any better than this.

We have great service.

They’re consistent, dependable. It’s like a place you come and everybody knows each other.

We have wonderful customers.

I smile every time I come here. I feel good. I wouldn’t go anyplace else.

I am Mike, I’m Amanda and welcome to Fressers Deli.

Fressers is a Yiddish word meaning somebody who eats a lot.

The sandwich is so darn big, so it’s a perfect person who likes to eat a lot.

What makes a good deli – good food. Fresh Food is probably the key I would think.

This the brisket right here. I’m going to add some garlic to it.

It’s fresh, it’s unique and they do it the old fashioned way.

So we got a little bit of molasses.

If it’s not fresh. I mean we won’t serve it.

Everything’s numbered. We did that so it was a little easier for us back here. It works out really well actually the numbers.

Number one is corned beef sandwich. Lean corned beef. We sell a lot of corned beef we can’t keep up with it. It’s thinly sliced. He cooks it perfectly. He’s got it down to a science.

First of all it comes from New York and we cook it daily.

Number 13 is a pastrami.

So it’s Pearl brand hot pastrami and we hand slice it and it comes with a black pepper coating.

We use nine ounces and it’s probably one of the best pastramis ever. We use brisket pastrami and we steam it and it comes out beautifully.

It just melts in your mouth.

Mustard end of story. Some people like cheese but the real New York way is definitely just on marble rye with mustard and that’s all you need.

Number 19 is what we call a Stacker.

A Stacker is three slices of bread with Swiss cheese, corned. Beef, pastrami, homemade coleslaw and Russian dressing. It’s very big as the number one seller.

27 is our Fresser which is a really big sandwich.

It is a two and a half pound sandwich.

27 I love the show off that is a definite showpiece.

It’s a huge sandwich. It has everything in it.

It comes out to about two and a half pounds. It’s kind of like wow.

They point. They point they say what the heck is that?

I call that the fat man breakfast.

It’s kind of a difficult messy thing to eat but people will enjoy it.

It’s phenomenal. It’s a lot of food but at the same time, there’s nothing like it as far as the breakfast dishes concerned.

It definitely have to have maple syrup with that you do with the fork and knife.

I’m definitely a Dunker, I like it on it but you have to dunk you know what I mean? The flavors come together just a little bit better I think.

People jump in their car and head to Fresser’s because we’re personable and we know your name.

Definitely a nice little feeling here without a question conference.

They’re going to get great service, amazing food. It’s an experience. We’re a destination, you’ll come back. I know you will.