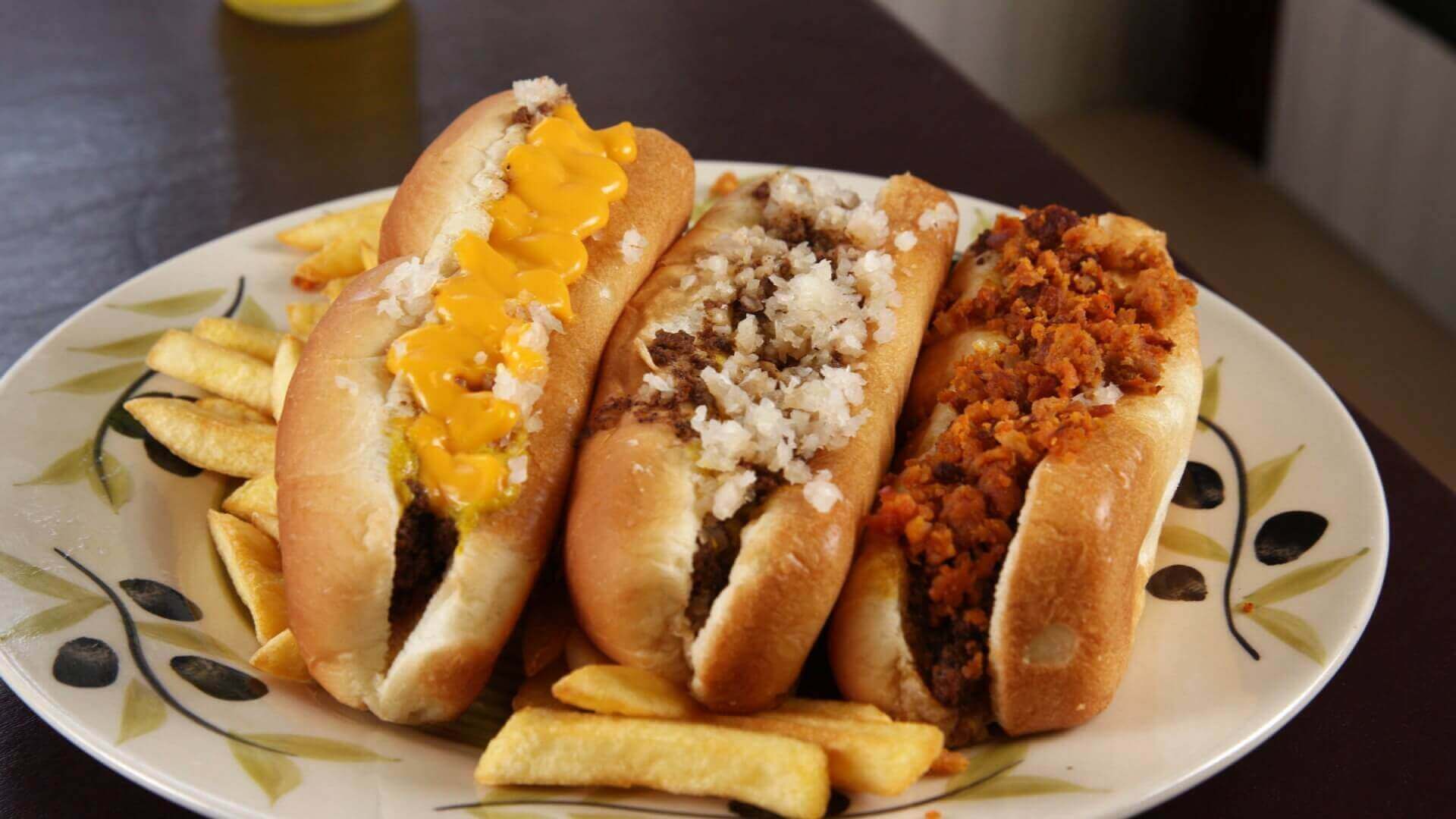 Since 1966, there’s been a small hot dog shop that’s made the diners of Fall River fanatical.
“I’m faneeked about hot dogs”
“I’m fankeed about the roles”
“I’m faneeked about her homemade soups.”
“Faneek is a lose translation of fanatic.”
We have several groups of people that come in, religiously to get their hot dog fix.”
“I’m fankeed about Faneeks.”
And with just one bite, you too will be a fan of Faneeks.
Chris and Liz Carpenter are the couple behind Faneeks; a quaint counter service spot decked out in historical shots of the south coast.  Here they offer the Coney Island Dog; a handheld phenomenon with a cult like following in the area.
“Coney Island hot dog starts with a steamed bun and then we use an all beef frank and it’s topped with mustard, our special Coney Island sauce.  And then a minced onion. And it is delicious.”
“Oh, it’s an explosion in your mouth. You don’t know where it’s going? Is it going for the mustard? Is it going for the sauce…. the the coolness of the onion.  It’s an experience.”
And ordering these delicious dogs is truly an art.
“If you’re at the register, you kind of have to be versed in the Coney Island talk. Because you’ll get one customer that’ll say, give me ‘two with the works for here’. And then the next customer will come in and say I want to ‘all the way in house’, which is exactly the same exact thing. It’s both sauce, mustard and onion for here. Or you’ll get people that asked for the inside out dog, which is the works underneath the hot dog.S ome people will call that the moustache saver. Then you get people they’re ordering it to go. And they’re saying put wheels on it or let it fly.  It’s almost like you’re constantly learning the the Coney Island language.”
In addition to “the original”,  there are other tasty options like the Faneek’s Special Dog loaded up with plenty of that local favorite, chorizo.  Or this indulgent one piled with lots of cheese.
“It is like heaven in your mouth. You get the richness from the beef, you get the creaminess of the cheese and the spiciness of the sauce.   Who wouldn’t want that?”
Besides hot dogs, Faneeks is the home of the role.
“A role, my wife invented.   Everybody has a roll you know what I mean? So we decided this to put one of those little lines on the top of the ‘e’ call it a role.  It’s a egg roll rapper with a variety of different feelings inside.  You can have the chorizo.  You can have a hamburger role or you can have the cheesecake role.
“It is a whole piece of cheesecake that we put into the egg roll wrapper, and we deep fry it, so it’s, it’s like a fried cheesecake. And then we’ll top it with the cherries. When you bite into it,you get the savory from the egg roll wrapper. You get the sweetness from the cheesecake. And then you get the bitter from the cherries, and it’s it’s just delicious.”
Other favorites include clam cakes chock full of fresh shucked meat.
New England AND Manhattan style clam chowders.
And a unique Fall River delicacy known as the Chow Mein sandwich.
“So a chow mein sandwich is not your typical sandwich. You’re not going to pick it up and eat it with your hands. Especially the way we make it. You put thebun down. And then we top it with the Oriental chow mein noodles which we get direct here from Fall River.   So then we put the gravy on and top it with our homemade in house hamburger. So it’s just a heaping portion of chow mein with a bun.”
There’s even a spin on this sandwich, known as the Portuguese Chow Mein.
“The Portuguese chow mein sandwich, and that is a Faneeks thing.
“It is the chow mein sandwich and then we top it off with chorizo. I really like the spicy and the savory together. And when you add the Cerise to the chow mein gravy. You’re getting a nice, savory spicy mixture.”
Faneek’s also offers all the comfort food faves you grew up on.
From a sensational Sloppy Joe to a soul satisfying bowl of American Chop Suey.
And since they’re not far from the ocean, you can be sure the fish and chips are always fresh.
“Fresh like it was swimming like the day before you eat it. We get it locally, right off the boat in New Bedford. And then we use a batter.  It’s a light beer batter with Haddock.   For a large we get three large pieces. So it’s just about three quarters of a pound that you’re getting for a large so our portions, I think unmatched in the city. And for the price you can I don’t think you can beat it.”
And more than that, you can’t beat the feeling you get when you go to Faneeks.
“If you want to get a taste of Fall River, you should come to Faneeks. We have everything that could possibly offer you. We have the chorise we have the chow mein… we have the personality, we have the accents and it’s just nostalgic.”
269 Rhode Island Avenue
Fall River
MA
02724
508 678-8261