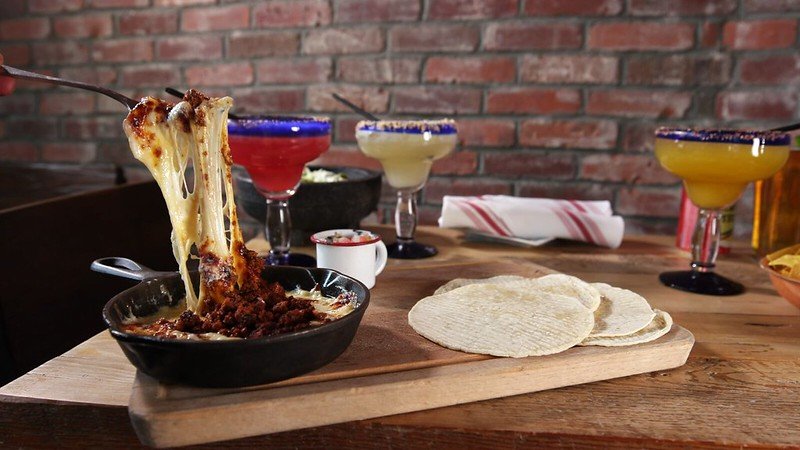 The queso is bubbling… The shrimp is sizzling… The margaritas are mixing… And your craving for authentic Mexican cuisine is about to be satisfied.

Located in Dedham Square, El Centro brings the flavors of Mexico to the suburbs. Owner Allan Rodriguez open the original location in Boston’s South End a decade ago, after he moved to the U-S from Northern Mexico and missed that taste of home.

Allan Rodriguez – Owner, El Centro: “I came here when I was 23 years old, and there were a few Mexican restaurants, but it was something missing. So I figured it was a very good opportunity to bring something different here.”

And what he’s serving here are dishes from all over Mexico.

Of course all of it is made from scratch, and just about everything comes from family recipes.

To start your meal at El Centro, some homemade chips with their signature fire roasted salsa are a must. Of course the creamy made to order guacamole is a good idea too. And there are all kinds of colorful, flavorful Margaritas to choose from, each one mixed to order with fresh squeezed juices, and made-in-house mixes and syrups.

Allan Rodriguez – Owner, El Centro: “Everything is homemade and fresh. We don’t buy things in Mexico, we don’t go and premake things, everything is made fresh at home. So I think that the customers must have that.”

For appetizers, there’s Grilled Street Corn smothered with sour cream and cotija cheese, and the indulgently gooey, Queso Fundido topped with Chorizo. This melty masterpiece is made with Munster and Monterey Jack, and served with corn tortillas and pico de gallo.

Allan Rodriguez – Owner, El Centro: “Grab the tortilla, put some pico de gallo on it, roll it up and eat it.”

When it comes to tacos, there are about a dozen delicious options, like juicy Carne Asada, with guac sauce and pico. Carnitas with salsa verde, cilantro, and onions, and the citrus kissed Al Pastor, whose flavor brings Allan right back to Mexico.

But no matter which taco you choose, Allan says the key any great taco is actually pretty simple.

Allan Rodriguez – Owner, El Centro: “To me, a good tortilla, and a good salsa. Because you can put anything inside. It’s perfect.”

Entrees at El Centro cover all the classics, plus plenty of dishes you’ve probably never seen before. There’s traditional Chicken Mole, with chunks of white meat chicken simmered in house made mole poblano sauce, finished with sesame seeds, and served with rice and refried beans. For something a bit different, try the Avocado Relleno, featuring a perfectly ripe avocado atop grilled steak and guajillo sauce. But steak purists are probably going to opt for the Carne Asada, and they will certainly be satisfied.

If you’re in the mood for seafood, there’s a beautiful Shrimp Ceviche, topped with cucumber, red onion, and cilantro. Or check out the Shrimp in a Molcajete, with sautéed onions and peppers in a spicy smoky tomato sauce.

Allan Rodriguez – Owner, El Centro: “We roast all the poblano peppers and jalapeno peppers, also the tomato, the skin of the tomato gets a little bit of black, and it brings a smoky flavor into the dish.”

For dessert, there are Churros of course, and just one bite transports Allan back to his childhood.

Allan Rodriguez – Owner, El Centro: “My family started making churros when I was 10 years old. Churros are the simplest thing to make. The dough is very simple. And we use cinnamon and sugar on it. And we give a choice of a chocolate or a dulce de leche on it. It’s probably the most popular dessert that we have.”

And since everything coming out of El Centro’s open kitchen is homemade by Allan and his team, it only makes sense that just about everything in the dining room is too.

Allan Rodriguez – Owner, El Centro: “We built everything ourselves. I do construction, and we built everything, A to Z. From the tables, walls, ceiling, reclaimed wood, I did all the lighting. But the main thing is to feel like a cozy place. One of the most important things that everybody in the kitchen and my servers they know. We are here for the customers. Period.”