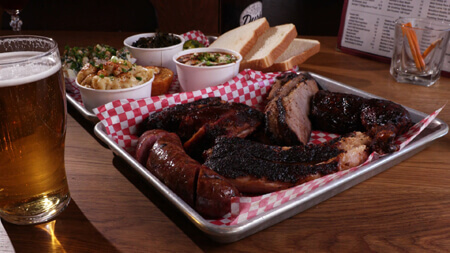 Barbecue might be trendy these days. But there’s nothing really trendy about barbecue. All it takes is a good cut of meat, wood, smoke, fire, a little seasoning, and a lot of patience.  And for some of the juiciest, smokiest, tenderest Texas-style barbecue you can find outside the Lone Star state, you should come and in get it at Durk’s.
Durk’s Barbecue on Thayer Street in Providence, Rhode Island might be a couple thousand miles away from Austin, but the ribs, brisket, and pulled pork taste straight from the South, according to Chef de Cuisine and expert pitmaster Brandon Teachout.
Brandon Teachout: “Durk’s is very Texas inspired barbecue. Heavy smoke. We have our briskets here. Have a little pork belly here.” We have somebody in at 4:30-5:00 o’clock in the morning. Just trying to get as much smoke, good clean white smoke as we can. Some babyback ribs. Percolating. So something goes in raw, with a little bit of salt and pepper and comes out looking burnt almost. And then you cut into it and it’s just… heaven.”
Creating such heavenly barbecue takes time, and the right equipment. So at Durk’s, they have an enormous, state of the art smoker named Stella (that’s what the guys in the kitchen call her).  It’s a wood-burning Ole Hickory pit, rotating multiple racks of up to 1200 pounds of meat at a time.  And when you come in to eat here, you can see and smell the smoker, along with the cutting station. So all you have to is decide on what kind of meat you want from babyback ribs, double smoked sausage, and sweet and sassy pulled pork.  Just check off what of you want right on the menu, hand it in to your server, and it’s sauced, sliced, and served in half pound increments along with a slew of downhome sides including mac and cheese, collard greens, creamy potato salad, and fresh-baked cornbread with brown butter and honey.
But the star attraction at this Lone Star style joint is the signature slow-smoked beef brisket, whether you get a slab or a sandwich.
Brandon Teachout:  “Our brisket is a great product. It’s all natural, non GMO. Minimal ingredients. It’s salt, pepper, paprika, and smoke. You have that carbon-esque exterior…
In the right light, it’s a nice mahogony, it does look beautiful… But then you slice into and like you said, you have that nice… electric pink hue from the smoke. And then the first cut it just amazing because you have like a waterfall of brisket juice… it’s magic.”
If the sights, sounds, and smells are too tempting to wait for your tray of barbecue, there are some starters worth ordering as well. Durk’s Buffalo Wings are brined overnight, smoked for over an hour, and fried to order so they’re crispy on the outside and juicy on the inside.  And the nachos are not your ordinary stack.
Brandon Teachout:  “So we serve them in a 9 inch cake pan. We do a layer of chips, he have our house queso, a little barbecue sauce, our chopped brisket, from there, we add another layer of chips, no chip left behind, little more queso, barbecue sauce, more brisket and then from there we top it with our housemade sour cream… pico de gallo, scallions. The way everything kind of plays together, it just becomes every bite is the perfect bite.”
Sandwiches are exceptional well.  Just check out the fried chicken sandwich, made with top quality chicken thighs sourced from Baffoni Farms in Johnston, Rhode Island, that’s soaked for two days in buttermilk, garlic, thyme, and a blend of herbs and spices, fried to order, and stacked with lettuce, tomato, and onion on a potato roll.  And then there’s the Sausage Sandwich, featuring a special custom recipe courtesy of Central Falls Provisions.
Brandon Teachout:  “They mix it, they case it, and send it to us raw and we smoke it in house.  We do a seared bun, like a griddled New England style hoagie. topped with our sausage, cole slaw… red wine vinegar and barbecue rub. It’s great.”
To compliment your meal, Durk’s boast over a 100 American whiskeys, a full roster of craft cocktails, and over a dozen rotating beers on draft. Desserts are ever-changing as well, so you could a find slice of pumpkin pie, homemade apple crisp, and a creative spin on the traditional tres leches cake.
Brandon Teachout:  “We take our Rice Krispies and caramelize them, and pulse them into a powder and mix them with a cake batter as like a very deep flavor and texture… from there we top it with a hot buttered rum sauce that we spread on it. Fleur de selle, finish it with a fresh batch of whipped cream and cinnamon. It’s everything I want in a dessert. It’s sweet, it’s balanced. And then the cinnamon brings a nice almost savory… finish to it.”
So from dessert to drinks to delicious barbecue, Durk’s definitely “checks” all the boxes.
Brandon Teachout:  “I want our customers to experience the hard work that goes into what we do. And take that away and hopefully it’s one of the better meals they’ve had in a long time.”
275 Thayer Street
Providence
RI
02906
401 351-2807
http://www.durksbbq.com