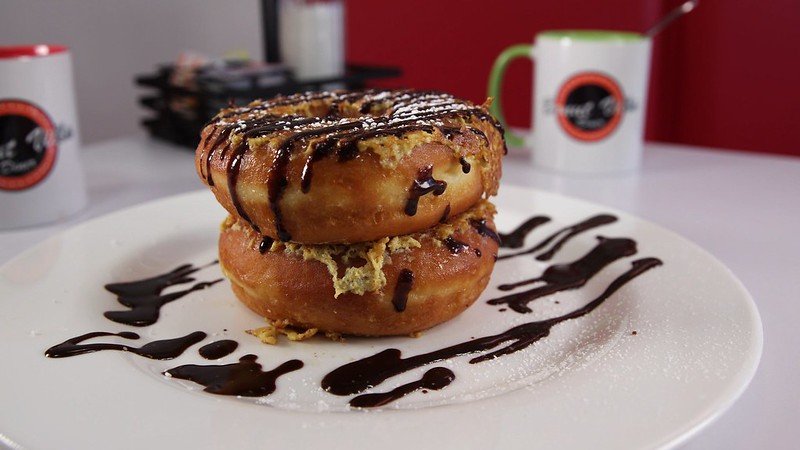 In the city of Cambridge, it seems that everyone has gone donut crazy.

“I mean, it’s donuts right? Everybody loves donuts. We’re in the donut capital of the US. So whenever we mention that we’re doing this new dish with donuts everyone gets excited and they always want to try it. “

And you can get creative twists on this classic breakfast sweet at the Donut Villa Diner. With locations in Malden and this one in Central Square, The Donut Villa Diner is a family run restaurant with a soft spot for soft hot donuts.

“Whoever got sick of doughnuts? I can have a donut every day. I’m always up for a donut.”

That’s Erin Bashllari who owns and operates the Donut Villa Diner along with his family. And since their diner pays homage to a classic treat, they created a nostalgic atmosphere to match- with big red and white banquettes, a friendly lunch counter, and old school diner decor throughout the interior, plus a beautiful patio out back.

“Donut Villa Diner is a retro diner that specializes in handmade donuts.  From the moment you walk in through the doors. You hear old school music. You see the neon signs.  You see the giant donut sign…pointing at the donut case. You almost catch the smell of the doughnuts because they’re right in front of you.”

Erin and his family started their business making donuts. And while these beauties are still available to grab and go, displayed in a case at the entrance, they’re even better when you get them made into one of Donut Villa’s amped takes on diner favorites.

“We were always selling doughnuts. You know, we’re always selling breakfast. And the moment that it clicked that, oh, I can actually you know, put these together and make creations if it became a lot more fun.”

The donut creations are the reason you come to Donut Villa Diner.  There are breakfast sandwiches served on doughnuts with crispy bacon, egg and cheese, doughnut French Toast made with two griddled honey dips topped with a chocolate drizzle and this over the top Donut Benedict.

“We got the fresh donut. We cut it in half. It’s griddled, and then Canadian bacon, poached egg and our homemade hollandaise sauce, which is also really good because you know who doesn’t love hollandaise sauce? It’s great.”

Or, you can get a mash up of breakfast and lunch when you order the Doughnut cheeseburger.

“The donut burger is just a classic bacon cheeseburger on a griddle donut. It’s lettuce, tomato, bacon, American cheese. And our eight ounce pattie and it’s definitely it’s a messy burger. If you were if you’re brave enough to pick it up with both hands. Go for it. But I’m a fork and knife type of guy when it comes to those.”

Of course, you can’t live on donuts alone, so the diner offers other options like house made hash served crispy alongside eggs, an oversized grilled cinnamon roll and decadent, donut-inspired Boston Cream Pancakes which are certainly a sweet way to start your day.

“When you bite into it, you get the soft fluffy pancakes and of course the Bavarian Cream and then the chocolate sauce to finish it off. It’s delicious.”

For something filling, try Donut Villa’s Monte Cristo- stuffed with ham and cheese and served with crispy French Fries. And for a real hangover helper, there’s the hangover burger.

“We’ve all woke up that Saturday or Sunday morning and suffering from the night before. So it’s a bacon cheeseburger. Got an egg on top. You have your jumbo English muffins sunny side up egg on top. This is definitely a fork and knife type of deal because once you bite into it, the sunny side back is gonna explode in your face. So fork and knife is recommended for this one “

At lunch, there are big bowls of mac and cheese topped with crispy chicken, an oversized steak tip sub smothered in grilled peppers and onions and a flavor packed, ultra fresh Ahi Tuna Burger.

“So Ahi tuna burger is encrusted in sesame seeds. And that is drizzle with chipotle mayo and you also have avocado, lettuce, tomato. It’s definitely one of those burgers that are satisfying but you also don’t don’t need to take a nap after. You gotta try it.”

And whether you’re there for breakfast, lunch or just to grab a donut from the case, you’d be absolutely nuts not to try the Donut Villa Diner.