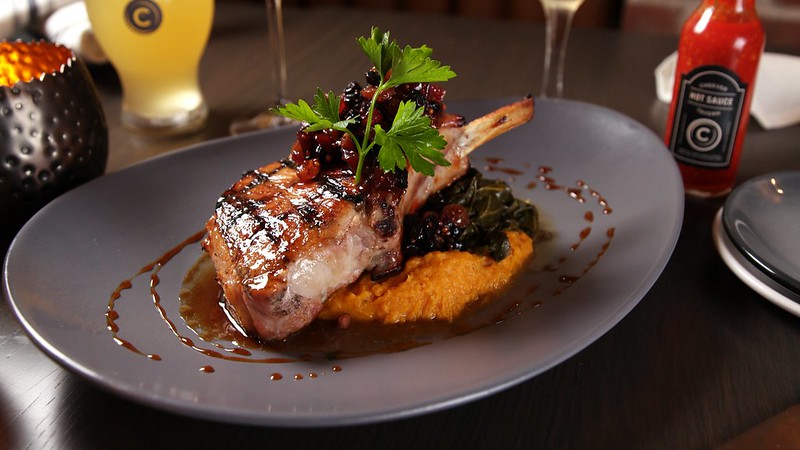 A Cider Brined Pork Chop atop sweet potato puree. A spicy Chicken Sandwich dripping with housemade hot sauce. A big bowl of slow simmered Bolognese. And a Shortrib Burger you might get for free! Food that’s familiar and fantastic, is the story of Cheever Tavern.

Located south of Boston in the town of Norwell, Cheever Tavern is the kind of place worth seeking out. And if you’re looking to dine here, you might have to do just that.

Mike Sheehan – Owner, Cheever Tavern: It’s in the town center, which has been described as a place people drive through, they don’t drive to.”

But Mike Sheehan is looking to change that. After a successful career in advertising and marketing, he opened the place about a year ago, serving the kind of foods everyone can enjoy, and recognize.

Mike Sheehan – Owner, Cheever Tavern: “It was designed to be a classic American tavern. Meaning a place where people can get together, they can enjoy a meal, and the food is familiar. There’s no foams, no gels, nothing that you have to learn how to pronounce, but it’s done with a twist.”

And it’s served in a 75-seat dining room with a clean and comfortable aesthetic, or out on the spacious 45-seat patio, with a beautiful firepit, and a view of the First Parish Cemetery. And this is where the story of Cheever Tavern really gets interesting… Because among those buried in the cemetery, is Pulitzer Prize winning author John Cheever. He is considered one of the greatest American writers of the twentieth century, and also happens to be one of Mike’s favorite novelists.

Mike Sheehan – Owner, Cheever Tavern: “I was always enamored with the author John Cheever. One of my favorite writers. And he went to Thayer Academy like I did. He got expelled, and around 1930, he went to New York, and he wrote his first short story, which was titled ‘Expelled’. And he soon became one of the leading authors of the 20th century. I was an English major in college. I actually did my senior paper on him in college. I wrote him a letter before I was doing my senior paper, and he wrote back and he said, ‘I would love to help, but I am far too sick to be of any assistance.’ And he died a few weeks later, after he wrote me that letter. And he was buried from the church across the street, John Updike did his eulogy, and he’s buried right next to our front door.”

And his headstone rests just fifty feet from the restaurant that now bears his name.

Mike Sheehan – Owner, Cheever Tavern: “He’s one of the closest graves to the front door. Right beside that tree over there. Most people in Norwell had no idea about the history and the role that he played in American literature, I thought it was a fitting tribute to a son of Norwell that people might be interested in.”

Now that you know the origin story of Cheever Tavern, you’re probably ready to eat. So start your meal with appetizers like Thai Baby Back Ribs with pickled mango, Mussels and Handmade Linguica drizzled with fresno hollandaise, and Confit Chicken Wings tossed in Cheever Tavern’s own housemade hot sauce.

Mike Sheehan – Owner, Cheever Tavern: “It’s hot and it’s sweet. It’s a mixture of both. And it’s a taste like you won’t find anywhere else and people love it.”

For even more of that spicy sauce, check out the Norwell Hot Chicken Sandwich.

Cheever Tavern wants to be a great neighborhood restaurant, and as such, Mike knew he needed to serve an award winning burger.

Mike Sheehan – Owner, Cheever Tavern: “We talked about when we were opening, we said, ‘we need a great burger.’ You got to have just a standout burger.”

So he and his team came up with a ground beef and short rib patty, topped with Vermont cheddar and smoked tomato aioli, served on buttery brioche. It’s named the Pulitzer Shortrib Burger… and for any customer who happens to have been awarded the Pulitzer Prize, it’s on the house.

Entrees at Cheever Tavern are a collection of comfort food classics. There’s crispy Chicken Under a Brick, with whipped potatoes and roasted veggies, a fourteen ounce Cider Brined Pork Chop with apricot and blueberry mostarda, and sweet potato puree, and a hearty bowl of pasta named ‘Catherine’s Pappardelle Bolognese’.

Mike Sheehan – Owner, Cheever Tavern: “That’s named for my 14 year old daughter Catherine, who is a connoisseur of Bolognese. It’s veal, pork, beef. It’s a good sized dish, people usually take some home, and I hope to have it for breakfast the next day. But it’s a great dish.”

Another family favorite here is ‘Michael’s Fish and Chips’.

Mike Sheehan – Owner, Cheever Tavern: “The Fish and Chips is named for my son Michael. He’s 11. He is a connoisseur of fish and chips. The key to good fish and chips is crispness, that the batter is crisp when it’s on the table and it stays crisp. And I think the way that chef Joe makes it with rice flour, Omission Ale, Tito’s Vodka, it stays crisp from beginning to end.”

And from dishes named after his kids, to a whole restaurant named for his favorite writer, this rookie restauranteur has created fantastic place made up of all his favorite things.

Mike Sheehan – Owner, Cheever Tavern: “The best piece of advice I got was from a very good friend who owns a restaurant. And he said, ‘Whatever you do, just make it a restaurant, you’d want to go to. Every choice you make, make it a place that you’d want to be, you’d want to hang out, food you’d want to eat. And if you make that choice at every junction, you’ll be happy in the end.’ And so it’s comfortable. It’s not pretentious, people are nice, and the food is very, very good.”