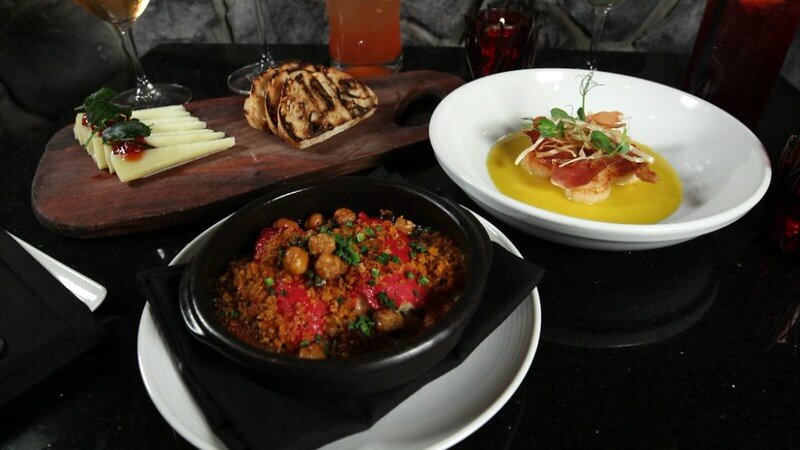 Sometimes the best places are off the beaten path.

“It’s in this walking alleyway that gives you kind of this European feel.  It’s not on a street, there’s no cars whizzing by.  We’re tucked away just enough and I really wanted to be that place you kind of had to search out you had to kind of know.”

And with Spanish food and a laid back Spanish mood, you’ll want to get to know Cava.

Located on Commercial Alleyway just off of Market Square in Portsmouth, Cava Wine and Tapas Bar is a decades old spot specializing in Spanish tapas and wine. Owners John Akar and Chef Gregg Sessler attended Exeter High School together and after working around the country and beyond to perfect their craft, they rejoined forces in their home state of New Hampshire.

“Both Greg and I went to high school together…and started in the same restaurant when we were 16 years old.  And then he went out to San Francisco and I went to business school at UNH. But we stayed in contact and kind of had always had this idea that we joined together to open up a restaurant. He had perfected the back of the house and I had spent all the time in the front of the house, perfecting that craft.”

The atmosphere at Cava is truly special, whether you request a seat in their dining room, at the Chef’s Table or on their stunning patio.

“The Cava patio is my favorite part of the entire restaurant.  A lot of people call it like say that it has a very European feel. You really can feel like you’re on one of those back alleyways in Italy or Spain. And then the backdrop is our vertical garden.  Just being around this garden and being out here in dining with great wine and great food is an experience that people look forward to every season.”

Chef Greg’s menu is made up of traditional Spanish tapas, but with his own twist.

“We want to stay somewhat true to traditional and authentic but at the same time, we want to give it our own personal touch. I really have been influenced by some of the chefs that I’ve worked with over my career.  I’ve really found a deep love and appreciation for the cuisine and culture”.

There’s a little something for everyone at Cava, with options like Spanish Manchego with a house-made tomato marmalade, Char Grilled Baby Octopus and crispy Serrano Jamon Croquetas.

“We take the ham. We braise it down. So it’s very meaty, but then it’s also very creamy. It’s like a ham and cheese fried ball, basically. I don’t know how else to explain it, but it works pretty good.”

There are sweet starts to your meal like the stuffed Medjool Dates stuffed with cheese and wrapped with crunchy ham, or the decadent dark chocolate bocadilla.

“I just love the idea of chocolate anytime throughout the meal. It’s basically a chocolate spread we do on grilled bread, a little bit of sea salt with pistachio, pistachio oil. It sounds simple, but it’s it’s just delicious either to start with in the middle of your meal or at the end.”

You can try something different and order the piquillo peppers stuffed with a flavor packed cream cheese.

Or go with a Spanish standard and get the Patatas Bravas.

“It’s twice fried potatoes. So that they’re really moist in the inside, crispy on the outside. Greg cuts them into cubes and we have two sauces served with the patatas- a classic garlic aioli and our Brava sauce. They are they are something that literally people will order one order and order a second order right afterwards.”

There are pan fried artichoke hearts served in a classic Romesco and Scallops topped with crispy ham in a Saffron garlic sauce.

“The flavors that come from the sauce are just unbelievable. And then chef places couple pieces of Serrano ham that’s been dehydrated so it turns into like a chip and then fried leeks on top and it’s definitely a very, very popular dish to end your meal with.”

If you’re looking for something larger for the table, paella is in order.

“It’s one of my most favorite things to make here. Every paella is a little different. It takes a little bit of patience, practice, to create good paella dish after dish. A good paella should have a texture to the rice that kind of caramelized crust, again adds more depth to the flavor as the paella begins to kind of caramelize and there’s a few tricks to it but a lot of that you got to come and sit at the Chef’s Table and check out on your own.”

And nothing caps your Cava meal off quite like their churros that are authentic, even Spaniards swear by them.

“We make all the dough you know from scratch on a daily basis. They’re piped directly out of a pastry bag into our fryolator to order and serve really hot right to the table.  They come out hot and they’re crunchy and gooey and covered in cinnamon sugar. Yeah, it makes all the difference. Yeah, I’ve seen. I’ve seen plenty of Spaniards brought to tears over them.”

And after just one visit, you too will have tears of joy when you dine at Cava.