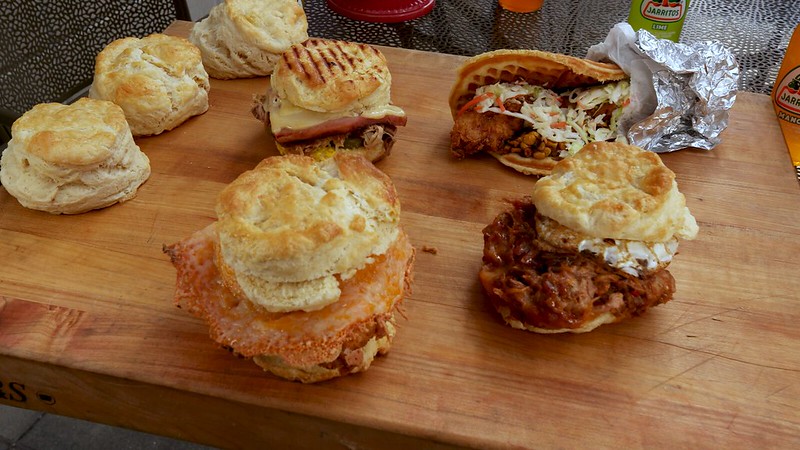 What makes a GREAT biscuit?

“The crumbly butter structure of it. It’s going to be flaky and buttery in the middle and it’s gonna have that crust on the bottom.The butter is gonna give it that rich creamy taste. You gotta use good butter.”

And they’re using lots of butter and a whole lotta love at Butter “UR” Biscuit.

Located on Rantoul Street in Beverly, Butter “Ur” Biscuit is a food truck turned brick and mortar. It’s the brainchild of owners Julissa and Dwayne Walker- a fun-loving couple who created a concept that most definitely sparks curiosity.

“People come here all the time. They’re like we’re driving by we saw your name. What do you guys do?”

“People don’t know what to expect. They just like butter your biscuit. I gotta go check it out what’s happening in there?

You walk in here that you get hit with the aromas, the smells. You see our funky menu. And you’re like, I just want to go out there and I want to hang out with those guys because they have a lot of fun.”

And the most fun is happens back in the kitchen, where chef Emily Mitchell whips up some beautiful, buttery biscuits.

“It’s her recipe. She’s here every day cranking out biscuits. And we go through them.”

It all starts in the mixer, where she meticulously makes sure the butter is cut into the flour perfectly.

“It will form layers as the butter is cut into the flour.  This is forming dough layers.”

After blending in some milk and eggs, Emily rolls out her dough.

“I have my own method.  I gather the dough together and don’t but the rolling pin on it too much.”

From there, the dough is cut and the biscuits are sent into the oven until they’re golden brown.

“The way she cuts it? The way she bakes it? You know, you don’t want a flat biscuit. You want a fluffy biscuit. You know, food is food. But I think the way she does it and the love that she puts into it is the experience when you come to Butter UR Biscuit.”

The menu is lined with sandwiches, all served on those biscuits of course, like this spin on a Cubano with house roasted pork, sliced ham, pickles and mustard….

“You get the crispness and the saltiness of the cheese and then you get a little bit of the runny egg on top of the crust of the crispy chicken. And then on the bottom you get a little bit of the spice with the sriracha aioli…with the delicious warm buttermilk biscuit. It’s big. But people don’t have a problem eating it. We have a problem wrapping it and not eating it.”

And then there’s the Jacob Biscuit.  Named after Butter Ur Biscuit Superfan and sandwich creator, Jacob Kipp.

“It’s on our buttermilk biscuit. It has our pork with barbecue sauce, cheddar cheese sauteed up on the on the flat top, then we do an over medium egg on top. And then the egg cracks and you get the goo of that into the pork.  Great hangover food.  It’s awesome.”

‘It’s stuffed with two fried chicken with our crunchy coleslaw. Which is sweetened with maple syrup. And then a corn relish that I came up with, which is basically like a corn salsa but it’s fresh..And then we put the fresh maple syrup on top.

‘You feel the salty the sweet. You feel the crisper the chicken like break and the tenderness of the waffle. It’s redonkulous.”

Beyond biscuits, the folks at Butter UR Biscuit also offer Latin style soul cuisine inspired by Julissa’s Dominican background.   There’s juicy chicken soaked in pineapple juice and served over Caribbean rice spiked with pigeon peas. And an old family recipe for authentic empanadas made with fillings like beef, chicken and veggies.

“It’s just something I grew up eating. It’s one of my favorite things.â€

And for a not so traditional treat, try the Mac and cheese balls.

“You get the crunchiness of the outside and then you get inside and you have the tender macaroni and just ooey gooey cheese. And then it’s fried. Everything’s delicious when you fry it. And then we serve it with an la vodka sauce with that with a fresh Parmesan cheese on top. “

And for Julissa, Dwayne and their entire team, serving this kind of fun, is in fact fun.

“We have a lot of fun. I think it’s about treat people like family. Where you came to work every day because you wanted to be here and not because you had to. It’s our team. You know, we have our life at home. And we have a family, we have our work family. Yes so it’s gotta be fun.”