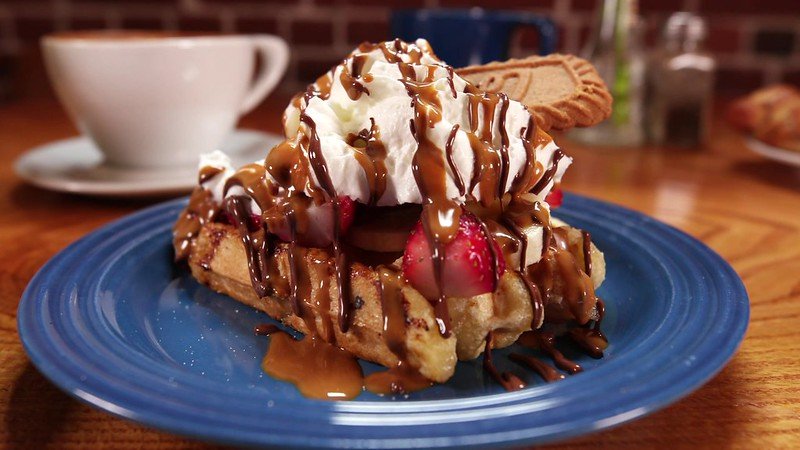 There’s a culinary world tour on the menu at Burgundian.

Attleboro Massachusetts might not be the first place that comes to mind when you think of global cuisine, but Shane Matlock is trying to change that. Thanks to careers in the military, and the vacation industry, Shane has traveled the world. And he believes the best way to experience a place is through its food.

Shane Matlock – Owner, Burgundian: “Every single place I went to, I found how culture was expressed through food and drink. And I fell in love with it. And so I said, let’s take that concept of street food, of food experiences, and allow people to travel through what I’m providing. And so that’s what Burgundian is, it allows that through these experiences that I’ve personally had myself.”

So when he opened this 80 seat spot about a year ago, he filled the menu with foods from his travels, and designed the dining room to transport customers to another place.

Shane Matlock – Owner, Burgundian: “Whenever somebody comes in here, we want them to look around and feel I’m not in Attleboro anymore, I’m in Europe, I’m in Buenos Aires, I’m in Italy. And that’s what a lot of people come in and say. Every little detail that we try to have here is allowing people to travel or see, or feel, or experience just a little bit of some other part of the world.”

Even the name of the restaurant itself, is imported from Europe.

Shane Matlock – Owner, Burgundian: “The term Burgundian I found when I was stationed on the border of France and Belgium. And it was in this book about the beers of Belgium. And I read this term, and it said, ‘Someone who loves food and drink and both quality and quantity’. And I loved it. And I think being a Burgundian kind of encapsulates everything that people who love coffee, who love food, who love drink, who love that atmosphere of being together with people, it all sort of lives in this term Burgundian.”

Burgundian serves breakfast, lunch, and dinner, so you can take a tasty trip for any meal. If you’re starting the day here, options include fresh baked European Pastries; a French inspired breakfast sandwich with a perfect runny egg; and a Venezuelan breakfast bowl filled with avocado, cotija cheese, and griddled sweet corn pancakes called Cachapas.

But the most popular choice by far are Burgundian’s waffles, but these are nothing like the basic Belgian waffles you’re used to.

Shane Matlock – Owner, Burgundian: “Burgundian is best known for our famous Liege waffles. A Liege waffle is not your normal waffle. It is a yeasted risen dough ball more like a brioche dough. It’s buttery it’s got these Pearl sugars inside that caramelize on the outside of the waffle. So the waffle is dense, it’s chewy, it’s got this almost fried dough meets donut, fried in a waffle iron, with that caramelized pearl sugar. I went to Belgium and I learned how to make these waffles from a waffle master. So ours are better than anyone else anywhere. I can guarantee that.”

And making these delicious waffles takes a lot of time.

Shane Matlock – Owner, Burgundian: “It’s a two day process to make these waffles. There’s a lot of rising of the yeast and time that has to go in there. And it’s constantly letting the yeast rise pushing it back down and then giving it another rise before we put it into the waffle iron for its third rise. And so the waffle will expand for the last time in the waffle iron. They’re like snowflakes, because they’re always slightly different each time.”

The waffles are so unbelievably good you could just eat them plain and be blown away. But if you really want to take things over the top, you can get them topped with all kinds of ingredients, like the Banana Churro Waffle, tossed in cinnamon sugar, and piled up with bananas, caramel, and whipped cream, or this creation known as the Streets of Bruges.

Shane Matlock – Owner, Burgundian: “It’s made with strawberries, bananas, whipped cream, Nutella and Speculoos cookie butter. And we call it Streets of Bruges, because anytime you go around Belgium, there will be little waffle stands and anytime you go up to a waffle stand, you’re guaranteed to find strawberries, bananas, whipped cream, cookie butter, and Nutella. So it just gives you a really wonderful chance to taste all of Belgium in one bite.”

The waffles also serve as a tasty foundation for the savory side of the menu. Like the ultra-popular Chicken and Waffles, with buttermilk fried chicken thighs and ancho chili maple butter.

If you’re in the mood for something Italian inspired, try this waffle topped with ricotta, fig spread, bacon, and basil.

Shane Matlock – Owner, Burgundian: “You have the sweet waffle, you’ve got the creaminess of the ricotta, you’ve got the really salty, delicious bacon, with a backbone of fig spread. And then that fresh basil, I think just brings it all together. It honestly is a taste of Italy on top of a Belgian waffle.”

Shane Matlock – Owner, Burgundian: “It’s a unique way for people to try something different. That’s what Burgundian is all about is, here’s what you think you know about a burger but let us pleasantly surprise you and sort of take you on a little journey.”

And it’s that journey through food that is at the heart of Burgundian.

Shane Matlock – Owner, Burgundian: “Burgundian is about a place where we cater to the aspirational traveler or the nostalgic traveler. Either the people that want to go and experience something different than their normal day to day life and restaurant, or they want to go and recapture some of the magic of the places that they’ve traveled before. And we do that through a great menu of street food from around the world.”