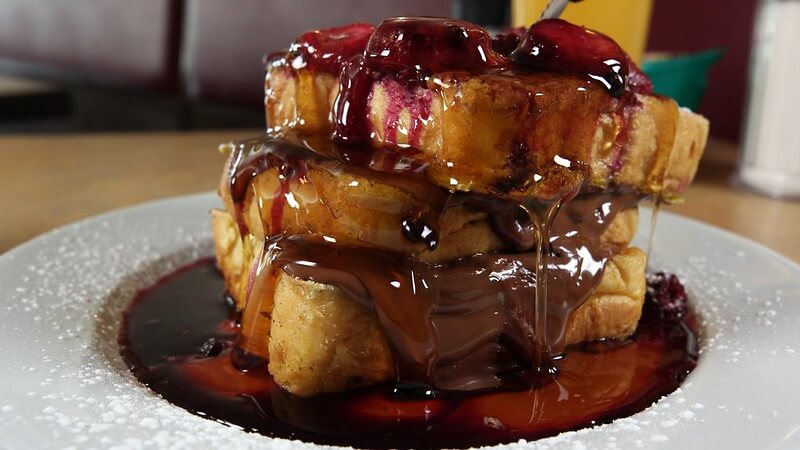 They say breakfast is the most important meal of the day. And when the hungry diners of Upton, Massachusetts want to start their morning right, they always have Breakfast at Stephanie’s.

“You should definitely have breakfast at Stephanie’s.”

“I go 45 minutes out of my way every day just to come here.”

“I always have Breakfast at Stephanie’s. “

Set in this sunny spot, Breakfast at Stephanie’s is the brainchild of owner Stephanie Miller- a hospitality veteran who took everything she learned along the way, and brought it to a place of her own.

“How are you today?”

“I’ve been in the restaurant industry my whole life. And I’ve just worked for so many people. And I just wanted to do it for myself.  I learned what people were looking for and kind of tweak things and was, you know, if I ever have my own restaurant, I’m going to do this and I’m going to do that and that’s what I did.”

And what she did was create a friendly spot with a loyal following.

“The food here at Stephanie’s is awesome.”

“The menu is unique.  It’s always changing.  Her recipes are clever.”

And where Stephanie likes to get REALLY clever is on her specials board.

“The board is definitely a good creative outlet. We pick two omelets, two pancakes, two French toast and usually a special Benedict and try to come up with some sort of crazy concoction that you’ve never heard of before. We try to go over the top.”

The specials board changes depending upon the day.  So you could find omelets like the Italian Butternut Squash with Cheddar or even an ode to a pupu platter classic, with the crab rangoon omelette.

“You get the creaminess and the tanginess of the crab Rangoon filling and then on top of that you’ve got the crunchy wonton and the drizzle loves sweet and sour. So I mean really tastes like you’re eating or crab Rangoon for breakfast, or lunch.”

With creations like the Triple Berry Nutella Stuffed French Toast.

Or, you can indulge with the Chocolate Chip Cookie Dough Stuffed French Toast

You can also start your day with something savory like the Pulled Pork Benedict.

Or spike your bloodsugar with the Red Velvet Whoopie Pie Pancakes. Some call them mind-bending. Others have called them memorable. But Stephanie thinks they’re best described as…

“Moist, moist or pancakes or moist? So many people can’t handle that word.”

If you prefer to order off the regular menu, you should set your sights on the The Vermont Breakfast Sandwich stuffed with bacon, egg and cheddar on apple cinnamon bread.

“It’s huge it’s a delicious sandwich it’s oozing of apples and cinnamon and it’s hard to pick up and eat it.  It’s more grab a fork and a knife.”

Or, check out the Big Mac omelet that’s a heck of a lot better than any fast food burger.

“The Big Mac omelet is a cheeseburger omelet with lettuce, onion pickle, and Mac sauce. It tastes like a Big Mac without the bread. It’s low carb. See a low carb Big Mac.”

And since she’s a fan of Buffalo Chicken Dip, Stephanie figured why not stuff it into an omelet.

When coming up with her French Toast recipe, Stephanie was inspired by another appetizer.

I was kind of craving coconut shrimp one day, which is sounds weird because it has nothing to do with French toast, but I just wanted that flavor. We take our fixed sliced Texas toast and we throw it in the French toast dredge and then we cover it in coconut and put it on the grill and get it nice and golden brown and it’s delicious.”

For something delicious and enormous, get the S’moreo Pancake. A dish that comes with a warning.

“We try to warn people that haven’t been here before that they might want to just order one and usually they think we’re silly and they order two and then they’re like, wow. We don’t know how to make small things.

And the oversized portions continue right into lunch with towering Triple Decker Cheeseburger Clubs. And tasty Reuben sandwiches. Â  But even bigger than the portions is the love Stephanie puts into every last dishâ€¦ Which is why it’s time you should try Breakfast at Stephanie’s.

“I love doing this. I love making people happy. I love seeing people’s faces when they see this outrageous food.  You know, their mouths are open, wide. Like mesmerized and it makes you feel good.