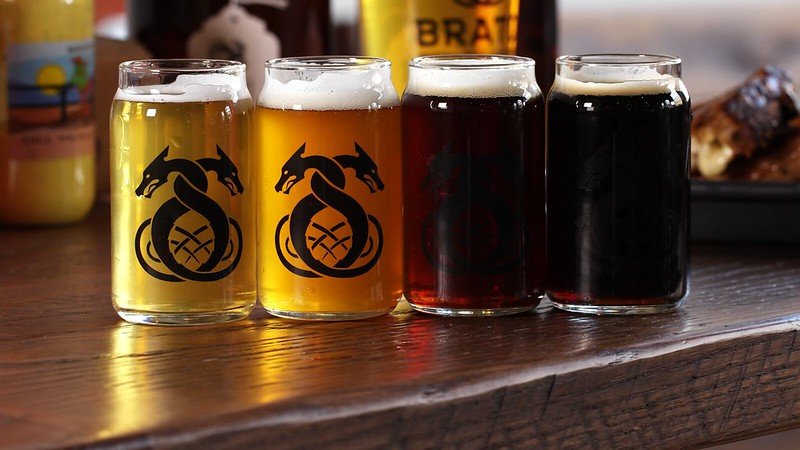 Who knew the king of beers lives right here in Brighton, Massachusetts.

“We have beer that is brewed on in house, in order to serve on premise, we tap everything directly from our tanks to our taps. So you’re getting the freshest beer possible.”

Meet Jonathan Gilman- a sultan of stouts, a lord of lagers and a prince of pilsners.

And you too will feel like royalty when you go to Brato.

Located on North Beacon Street in Brighton, Brato is a big, airy space clad with comfortable wooden booths, funky art, and a fantastic outdoor patio.  But what you don’t see in the dining room is the magic going just beyond the doors of the kitchen, where expert brewers take time and precision to make that perfect brew.

“What we do is we brew our beer back there.  From there, they are tapped directly to our line and we either are able to pour you a glass of beer from there, fill growlers.  But the main idea is that our beer is brewed fresh and served fresh straight out of the tank here at Brato.

And this beer ain’t just for drinking.

“We like to cook a lot of food here that people are familiar with, but also sort of stretches their level of comfortability. We like to put twists on classics, but mostly focusing on comfort food.”

The obvious starter in any beer hall would have to be wings.

“Brighton hot wings are deep fried and then tossed in a little bit of a chilly oil with our custom spice blend and then served with the dill pickle ranch. It’s got some nice dill and tumeric and garlic in there and it gives it a nice like bright neon color, but also really intricate flavor that’s reminiscent of a bread and butter pickle”

Another buffalo based dish is the Buffalo Cauliflower.

“We dredge our cauliflower in some buttermilk and flour and fry it and has a really awesome texture very similar to a boneless chicken wing. we toss it in our house made buffalo sauce with the brussel sprouts and serve it with a blue cheese dressing . It is definitely not the healthiest vegetables have you ever had. But it’s the most fun way to have them”

But the perfect app to share over a beer is Brato’s nachos made with beer cheese.

“When it all comes together, you’ve got this nice sort of like beer cheese flavor, a little bit of heat from the chili and the beans, some brightness from the cabbage and then a nice crunch from the tortilla”

And while beer may be the most popular choice here, cheese has got to be the runner up. In fact, there’s an entire grilled cheese section of the menu.

“So the Vermont cheddar pimento grilled cheese was the first one that we put on the menu. So what we did was we made a sort of compound cheese by adding cheddar and using cream cheese. We whipped those together with tarragon peppers and mustard. And then spread that on the grilled cheese and you get this really nice some sort of sweetness from the pepper and tarragon a little bit of spice there and the sharpens from the cheddar.”

“One of the best parts that everyone would agree on French Onion soup is the crouton. So with that sort of cheese bearing in mind, we wanted to recreate that flavor experience in a grilled cheese. So what we did was started with a gruyere grilled cheese with caramelized onions and a lot of herbs and then it provides that nice like Gruyere funk to it as well to sort of scratch that itch. And we think it makes a really amazing grilled cheese”

But if you’re having trouble deciding, just go for a flight.

“Being a tap room and people often associate beer flights with tap room. But we wanted to take it one step further and offer grilled cheese flight. If you were the group of people, you can decide which one you like the best in sort of order them as you go that way.”

And what’s beer without a brat- and here, they’re also made in house.

“One of the things we’ve done here since our inception was we always make our own sausages. .And then we blend it with spices, mix it and stuff it into casings, and then we slowly poach it off in our ovens ahead of time so that when we get an order in, all we have to do is sort of brown that sausage serve it with when it’s coming with and off to the customer and a brioche bun.  You want that snap of the sausage, So we make sure that every batch we do has certain criteria we check off along the way in prepping it to make sure that that bind in the meat is really really good. Once you get it you can’t beat it.

And if you want that classic combination of a burger and a beer, Brato has you covered- topped with cheddar, brewed pickles and special sauce.

“We taking the bite of the burger, you’re gonna get some of the Tang from the pickle some of that smokiness from the smoked tomato aioli, the sharpness from the cheddar, and then the richness from the from the actual beef itself.

It’s a great burger. It’s one of the most highly regarded ones in the neighborhood.”

And whether it’s brats, a burger or an iced cold beer, you’re going to love it here at Brato.