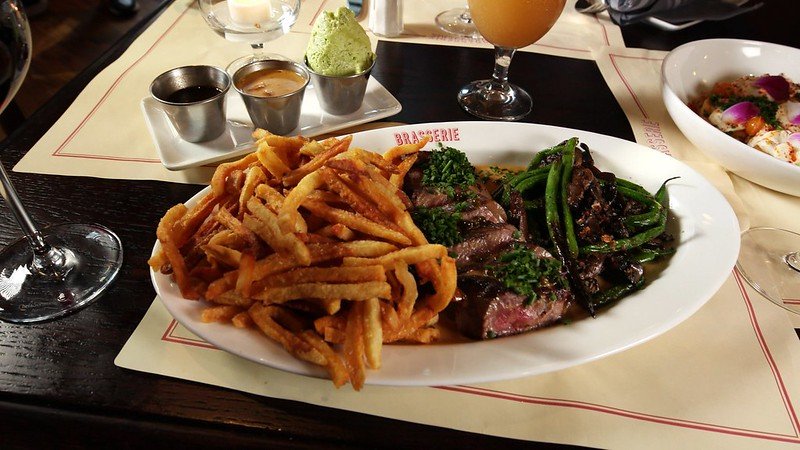 This is what happens when a lobster roll meets a croissant.

And when ice cream sandwiches get a Parisian spin.

“We wanted to take macarons and kind of kick them up a notch.”

You’ll want to forget everything you know about French cuisine, when you dine at Brasserie.

Located in this big, beautiful spot in Boston’s South End, Brasserie is a restaurant where Chef Nick Intonti takes traditional French fare and gives it his own New England twist.

“We wanted to kind of be in modern New England brasserie. We’re using seasonal New England ingredients, and we’re looking at everything through French lens.”

The space itself will transport you to Paris, with dim lighting, white subway tile, and tasteful French touches throughout the large, energetic room.

“We have a huge patio, beautiful umbrellas. It’s gorgeous out there. It looks like the south of France. Inside we have some really romantic tables. We have some tables that cater to big parties. It’s big, it’s spacious. It’s airy during the day, and then at nighttime, it’s super intimate, cozy.”

There are many ways you can kick off a meal at Brasserie.   There are unique salads- like this gem lettuce stuffed with tomatoes, cucumbers and microgreens.  Or this gorgeous Heirloom Tomato Salad.

“We’re using native heirloom tomatoes, with goat cheese, everything spice and cucumbers. It kind of has the the taste of everything bagel. That’s one of my favorite items on the menu.”

If you want to go super traditional, you can always turn to the classics like escargot served with crunchy toast points. Or their velvety chicken liver mousse presented with raspberry coulis and candied pecans. But for a true taste of Brasserie, nothing brings New England to France quite like the Maine Lobster Croissant.

“We wanted to do something that was similar to a classic New England lobster roll but with a French twist on it. So we use buttered croissant and cold lobster all preparation.

I think it evokes the same idea as a lobster roll. But it also has some that really buttery lightness from the croissant.  It just reminds me of New England.”

If you ask Nick what to order, he’ll definitely direct you to Brasserie’s burger.

But that’s not because Nick didn’t try.

“I’m a huge fan of Big Macs. I love Big Macs. And I wanted to do the same McDonald’s special sauce. I never worked at McDonald’s. So I had to do do as much research as I could to kind of mimic the Big Mac sauce.  It’s unbelievable. If I’m hungry in the middle of service, I’ll fire up a burger just smash it in the back. It’s definitely better than a Big Mac.”

And if pasta is on your mind, try a French take on Italian gnocchi.

“Our gnocchi is Parisian style gnocchi. It’s made with pate a choiux which is a cream egg and flour based dough. Super light, fluffy. These are really airy and it’s it’s finished with a foam made of gruyere cheese. It’s just warming and light and delicious.”

Seafood is a specialty of Chef Nick- who spent the summers catching blue fish with his grandfather on the North Shore.  So he had to put it on the menu.

“We do it with a sun gold, tomato mostarda, pickled red onions, a fennel salad and a corn succotash. So super local New England. But it also kind of evokes the flavors of southern France. “

And for a little of Massachusetts meets Marseille, try the Bouillabaisse.

“We use a lot of local Cod, mussels,  littleneck clams, shrimp. Then it’s finished with a little lobster stock, a little saffron.  Super delicious. It’s really what we are trying to try to do here at Brasserie.”

There are classic French entrees like the Steak Frites,  served with an option of sauces- like this au poivre one. And then there’s the satisfying Slow Braised Lamb Shank.

“It’s reminiscent of Ossobuco. The best way to describe it is unctuous. It’s super savory. We cook it for like six hours slow braised, it has fennel, cumin, coriander. It’s just rich and coat your mouth and just warming. It’s awesome.”

Since the French are known for their sweets, desserts are a must at Brasserie.  There is a velvety Olive Oil Cake with tomato jam and this Dark Chocolate Mousse presented in a waffle cone.

“It’s a classic dark chocolate mousse and we serve it in a waffle cone that’s rimmed with dark chocolate ganache and candied almonds. Yeah, super playful. Kind of harkens back to being a kid eating an ice cream cone. Reminds me of a drumstick. Every time we drop at a table, people start smiling. It’s delicious.”

And for even more whimsy, order the Macaron Ice Cream Sliders.

“Basically take a macaron and kick it up a notch by putting in some ice cream. They’re super smashable. They come four to an order but you can easily 2-3 orders at a time. Anytime it’s busy.  I hide in the walk in freezer and I eat a couple of them.”

And when the chef is sneaking food, you know it’s THAT good, which is why you should try Brasserie.