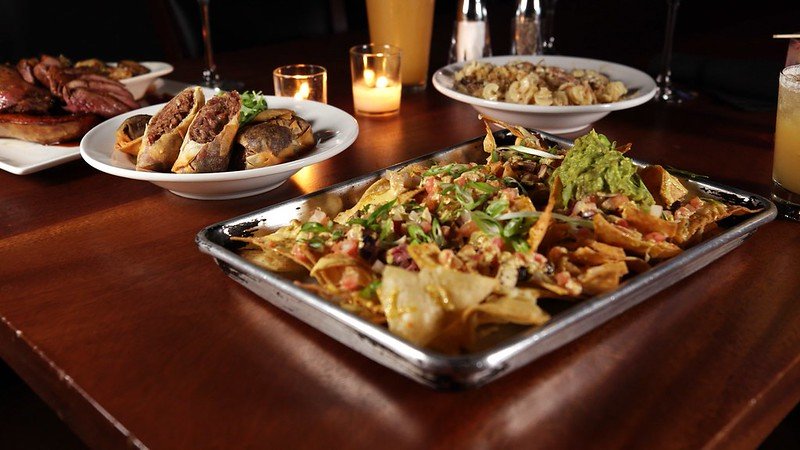 Restaurateur Jeff Abellard and Executive Chef Jason Duffy have a way with thinking outside of the box.  Especially when it comes to restaurants.

“It started with Jeff Abellard the owner and I just saying that we’re going to invent a restaurant and then figuring out what that meant.”

And you’ll find a delightfully different dining experience at Bistro 603.

Located in Nashua, New Hampshire, Bistro 603 is the sister restaurant to Waltham’s Bistro 781.   In both of these culinary destinations, the energetic culinary team has created a fun atmosphere and a playful menu to match.

“We just like to make some good scratch. Food of both fun mix of fun new ideas and the old comfort classics and putting our little signature  spin on everything and we’re just giving the people what they want and adjusting as we go.”

And when designing the space, Jeff made the 603 dining room as diverse as the menu.

“We built up a back dining room.  So this can get a little loud in here and we have a pretty big bar. We have a kind of loungeish kind of booth area over here and our patio is awesome as well.”

There are many ways to kick off your meal at Bistro 603. Like the steak bomb spring rolls served with a Parmesan Peppercorn dipping sauce. And Jeff’s favorite, the Sheet Pan Nachos.

“Nachos are probably my favorite food. We want a sheet pan because that way you can spread the chips out and pretty much have every chip have have toppings on them. It’s really good.”

But nothing gets you going quite like 603’s Braised Short Rib Mac and Cheese.

“It’s a mix of cheddar Parmesan, a little bit of Swiss cheese.  We mount it with American as it gets melted down in the pan, fold in some of our braised short rib and caramelized onions.. with a little bit of that short rib gravy and a little bit of butter toasted panko chrome on top of that. It is savory and delicious.”

The entrees at Bistro 603 are both creative and craveworthy. There are the Pork Belly Tacos  topped with watermelon, queso fresco, pickled onions and a mojo rojo sauce. Short Rib Crunch wrap Tacos- featuring slow braised short rib stuffed inside both a soft and hard taco shell for a crispy bite every time and if you really want to get your crunch on, you’ve got to get the Crunch Wrap Burger.

“We got the tortilla wrap. We throw in a little bit of avocado and Pico de gallo, some pepper jack cheese, our Mojo sauce, some of the crunchy taco shell and then you just fold the thing from like eight points overall towards the middle. Sear the flap shut on the flat top and then you got yourself a nice compact little wrap burger.”

“It’s different because most people don’t get a crunch when they bite into a burger right? This you actually get a hardshell tortilla so it’s a it’s an actual crispy crunch to it.”

There are globally inspired dishes like the Duck Breast and Confit Leg prepared with a coriander honey glaze and a Skillet Paella loaded up with all of your favorite seafood.

“It’s a saffron rice based.  We saute up some chicken and chorizo, sear some scallops and shrimp, sizzle it up on a skillet and it’s a huge hit. “

“Huge thick brownie scoop of chocolate ice cream. You got some marshmallow on there some, caramel chocolate sauce, graham cracker dusting, whipped cream. So I mean, you hit all the all the basics on fabulous dessert right there.”

If you find yourself in Nashua during the weekend, a Bistro 603 Brunch is a must.

They do Crispy Fried Chicken served over fluffy waffles, 13 types of benedicts- including this tasty crab cake version and a Cinnamon Bun Skillet.

“It’s a Cinnabon in a skillet. It’s huge. We make a housemade icing to go on top of it. Kids love it. Adults love it. It’s a crowd pleaser.”

And when Chef Duffy wanted to really wow the crowd, he created the Bacon Super Melt Sandwich- jam packed with it all.

“It was as many things as I could cram in there. The butter toasted challah bread, both Swiss and American cheese, a couple of fried egg, house made bacon, avocado, tomato slices and chipotle mayo all coming together in one supersized melt.”

“It’s huge. It’s one big sandwich that when you cut into it, you’re like whoa, and then you take a bite and you understand it.”