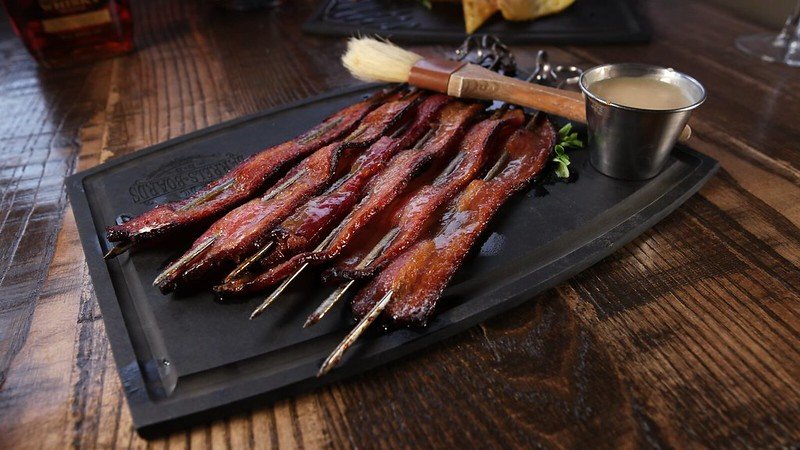 Plenty of chefs love bacon, but few love it as much as Manuel Hernandez.

So you’ll find plenty of bacon among the appetizers, entrees, and even desserts, at Barrels & Boards.

Located just of I-495 in Raynham, Massachusetts, Barrels & Boards is the hottest spot in the area for upscale comfort food, dozens of whiskeys, and an all-around good time. Because according to co-owners Dave Laghetto and Dean Saxonis, it’s exactly the kind of restaurant this town was craving.

Dean Saxonis – Co-Owner, Barrels & Boards: “We’re different. From the service, to the culinary skills in the kitchen, to the food, just everything, it’s all put together.”

And it’s all housed inside a space that’s absolutely loaded with whiskey barrels. They’re at the bar, they’re on the walls, they’re used for tables, and there’s even a giant custom made one that serves as the restaurant’s front door.

Dave Laghetto – Co-Owner, Barrels & Boards: “It’s a barrel. And it took them forever to build that. Every one of those boards is cut individually to make the round circle of a barrel. So when you walk in, you walk into whiskey barrel.”

The space itself is big and busy, with 135 seats inside, and another 80 outside. And according to Dave, when it came to feeding everyone, he knew Executive Chef Manuel Hernandez was the man for the job.

Dave Laghetto – Co-Owner, Barrels & Boards: “He’s young, ambitious, got a great creative mind, and he loves what he does. And that’s the key you love what you do you just do it that much better.”

Manuel Hernandez – Executive Chef, Barrels & Boards: “One of the main things in my menu is it’s fun. Everything has a twist, everything has a flair. I like to present to customers items that they know with totally flavor they don’t know. So that way they try my food, they’re like, ‘wow, I have seen this dish before, I tried this dish before, but I’ve never tried these flavors before.’”

The flavor parade starts strong at Barrels and Boards, with appetizers like the New Bedford Stuffy, because this classic has a delicious surprise inside.

Manuel Hernandez – Executive Chef, Barrels & Boards: “You find a nice big scallop in the center of the quahog, and then we stuff it with a lot of linguica, peppers, onions, bacon, and then we finish it with this delicious creamy cilantro garlic aioli. There’s going to be so much going on in your mouth that, the first thing is like, what am I tasting? Once you get into it, it’s like, wow, this is amazing.”

For something a little lighter, there’s Torched Tuna Tartare atop chopped avocado, served with crispy wonton chips. But for the appetizer everyone here is ordering, look no further than the Whiskey Barrel Candied Bacon.

Manuel Hernandez – Executive Chef, Barrels & Boards: “We get the pork belly in house. We cure for least 48 hours, we also cut it in house, we smoke it in house, we coat it in sugar in house, we par cook it, then we put it on skewers, then we serve it to customers. It’s a long process but it has paid off. People love it.”

And if the bacon isn’t great enough already, it comes with a cup of oak barrel infused butterscotch and a pastry brush, so customers can slather on a layer of sweet and smoky glaze.

Manuel Hernandez – Executive Chef, Barrels & Boards: “That’s what our main focus was, to make sure the customers interact with the appetizer, to make it fun for them. It’s just not an item that you just grab from the plate and then just eat it. No, it’s something you’re going to interact with it, you’re going to brush it, you’re gonna make it taste even better than what it is by itself.”

When it comes to entrees, the flavors here are big, and the portions are even bigger. There’s Baby Back Ribs braised in apple cider and beer, and finished on the grill with whiskey barbecue sauce, a Fried Seafood Trio packed with scallops, shrimp, and haddock, Pan Seared Scallops and whiskey bacon jam on a bed of creamy parmesan polenta, and a thick cut, 16-ounce, Delmonico Steak dripping with melted garlic butter.

Manuel Hernandez – Executive Chef, Barrels & Boards: “Thick steak, you got to have a thick steak. I mean you don’t want to thin steak, that’s for breakfast places. You want a nice, thick, juicy steak.”

In fact, the steaks, and everything else at Barrels & Boards have become so popular, they’ve opened a market right next door to the restaurant, where customers in a hurry can grab and go.

Dave Laghetto – Co-Owner, Barrels & Boards: “It just makes sense, with the popularity of our steaks and things like that, we put the market together, and it’s been a great success so far, as far as fresh cut meats, prepared meals, things like that. It’s great for the families that are in a rush and want to just grab a prepared meal to bring home. Everything is homemade, everything is done in scratch from the kitchen.”

Back at the restaurant, the food, and the bacon just keep coming, like on the King Burger, piled high with an angus patty, braised beef brisket, caramelized onions, cilantro garlic aioli, a sunny side egg, and whiskey bacon jam. And that same Bacon Jam also finds its way onto a Grilled Tomato and Bacon Pizza.

Manuel Hernandez – Executive Chef, Barrels & Boards: “You put your dough, you put your sauce, put the cheese, put the tomatoes. But then instead of using regular bacon, we use the whiskey bacon jam we make in house, and then we finish it with a little drizzle of honey. Now you have the citrus from the tomato sauce and you have the sweetness of the honey, which is just two great combinations.”

They even find a way to bring home the bacon at dessert, in the form of this sweet and savory Bacon and Waffle Sundae.

Manuel Hernandez – Executive Chef, Barrels & Boards: “We make waffles in house, we crust it with pearl sugar, we put a nice scoop of vanilla ice cream, we put the oak barrel butterscotch on it, candied bacon, steak knife, because you can’t cut that with a regular knife, it’s got to be a steak knife, and more butterscotch on top. How can you go wrong with that?”

And as you might imagine, when this thing hits the table, customers go a little crazy.

Manuel Hernandez – Executive Chef, Barrels & Boards: “When they see it, they’re wowed, and then when they taste it, they’re just ‘wow’.”

So prepare to be wowed when you experience everything at Barrels & Boards.