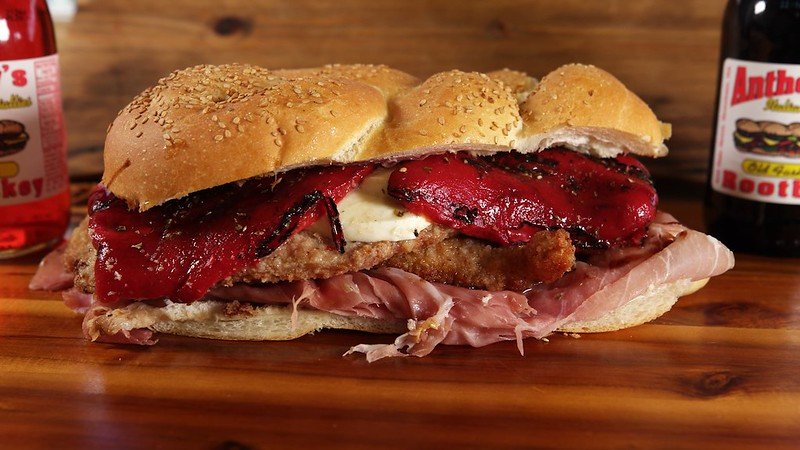 He’s a sommelier of oversized sandwiches.

“When you take one of our sandwiches home, it’s good for two days. That’s how big they are.”

A master of meatballs.

“We are making meatballs. We’re making them right now.  You can smell them in the air.”

And creator of a lobster roll that has customers going crazy.

“I want my lobster rolls. Are they ready? Are they here? You better not sold out”

He’s Anthony Piccoli, and you’ll find him, and all of his creations at Anthony’s Specialties.

For over five decades, Anthony’s Specialties has been a standby in Stoneham, Massachusetts, located at the corner of  Franklin and Main.

“Anthony Specialties is a local sandwich emporium and we custom make every sandwich to order. When people wait in line, they watch stuff being made. And then they what I’ll have that. And that’s what we do.  I grew up here. I grew up in the store. I’ve been here since 1980. My dad started the store in 1971. He had no background. He was an electrical engineer says I want to open a deli. So he came in and started working. And that’s pretty much it.”

Tiffany Piccoli, Anthony’s wife is the friendly face you’ll always find behind the counter- doing her best to make her customers feel at home.

And with not only will the service make you feel at home, the smells will too.

“I think people eat with their nose first. Let’s face it. You walk in somewhere and it smells awesome. I want that. And that’s what they get.”

All of your old school sub shop favorites find their way onto Anthony’s menu. There’s an ultra tender steak tip sub flavored with that famous Dom’s marinade. A Steak Bomb spiked with mushrooms, peppers, onion and American cheese. And the flavorful Chicken Prosciutto – an eye-popping sandwich that went viral on Anthony’s social media.

“They don’t know what it’s called. But they come in with the picture on the Facebook and they say I want this. And I always say the same thing. I’ll make that point it’s gonna look better than that picture.  We use our nice Chicken cutlets, parma prosciutto I cut really thin we use oil seasoning and a balsamic glaze, fresh mozzarella roasted reds. When I come out with it and I show it to them. I’ll say- look at that and they say yes.”

The Meatball sub is stuffed with these gorgeous savory globes, made with a time tested family recipe every day.

“Years ago, my grandmother made them so we continue making them the same way.  They hand rolled every one of them the ingredients are simple. Same ingredients that goes into sauces is in our meatballs. So they kind of marry together.”

That sauce is the lifeblood of many of Anthony’s specialties and making it is a team effort.

“Everybody walks by the pot and stirs it.  It’s like a very Italian kitchen thing. I walked by that probably 20, 30 times in the morning. I just do it unconsciously. People rave about my tomato sauce. I make a big pot every day. It’s always gone by the end of the day.”

You’ll find that same sauce on Anthony’s Chicken Parm, which can only be described as….

“Pure magic. That’s just what people want. They want that bread. Our bread is on the softer side. It’s not crunchy. But that’s our style.  I’ve never had a complaint.  No one has ever called me to tell me they don’t like my chicken.”

If you order an Italian at Anthony’s, you better bring your appetite.

“Our Italian’s are about as big as your head. Unless they have like a really big head. I’ve been here for 43 years, I’ve never had anybody come back and say that sandwich wasn’t big enough.”

And if you want to share that Italian goodness with lots and lots of heads, Anthony’s four foot Italian is in order.

“I get my bread fresh, it’s still hot when it comes in in the morning. I’m going to grab four loaves of scali.Then I’m going to put a layer genoa salami down, layer of ham capicola down, a layer of mortadella and then some sharp cheese. It’s super sized. It’s enough to feed 20 hungry people.”

This sub really is a show stopper.

“People are like, wow, where’d you get that? You know? And it’s usually very impressive.”

If you’re a lobster lover, Fridays are THE DAY you’ll want to hit Anthony’s

“So the lobster is Fridays and if there is any lobster left on Friday by 11, it’s usually gone.

“Eight o’clock in the morning people start filing and looking for the lobster salad.

I take claw and knuckle meat, little mayo thrown on a roll. Doesn’t get any better than that. I think the simpler, the better. Because you want to taste that claw and knuckle meat because that’s the sweetest part of the lobster, that’s what we use.  We’re sold out by 11 o’clock.”

Beyond sandwiches, Anthony’s offers salads like this Antipasto. Irresistible arancini in a variety of flavors, and super soft Sicilian pizza. But it’s the calzones that are a true crowd pleaser- filled with anything you want.

“I hand stretch the dough till about two feet then I fill it with whatever your dreams are made of. “

And for a hand held you won’t want to put down, you’ve got to get yourself to Anthony’s Specialties.

“People should come to Anthony’s because the service, the food, the freshness. Sandwiches, subs and smiles. That’s what we got. And that’s what we’re giving.”